Several large-scale disasters occurred during the late 1940s and the 1950s that left permanent marks on Ottawa: A gas leak caused an explosion on Slater Street; a fire in the Byward Market destroyed an entire street block; an industrial accident at the National Research Council killed three people; and a military jet crashed into the Villa Saint – Louis Convent in Orleans.

Title/Description: Debris from Byward Market fire. This was not the first time the Byward Market had suffered from fire. Previous serious blazes occurred in 1862 and 1874. However, the Market always bounced back from disaster and ensured that business continued.
Photographer: L.
Date: January 2,1957.
Credit: Andrews-Newton Photographers Fonds / City of Ottawa Archives / MG393-AN-049717-001.
Copyright: City of Ottawa Archives.

On the evening of May 15, 1956, a CF 100 military jet crashed into the Villa St. Louis Convent, an Orleans based rest home run by the Grey Nun’s of the Cross. It was one of the worst air disasters in the history of the city.

That evening, a southbound transport plane reached Ottawa ahead of its flight plan, and showed up on radar as an unidentified plane. A jet from the Uplands Air Force Base had been dispatched to identify and intercept the plane. A second CF 100 was then dispatched to complete the same type of interception. One of the planes landed; the other indicated that it would continue flying for a little while in order to burn off fuel. This was the last communication received from the aircraft.

The Sisters of Villa St. Louis were getting ready for bed when the plane crashed through the chapel of the convent. The building quickly caught fire and the jet fuel and munitions on board the plane exploded. Neighbours rushed to help. 25 people made it to safety, but sadly 11 nuns, a priest, a servant, and both crew members of the plane were killed.

An investigation began the following day. The pilots had given no indication that they were in trouble, so the investigation looked at why they did not try to eject themselves. Although the investigation continued, it became clear that the cause of the wreck would never be known.

Funeral services were held at the Notre Dame Basilica on May 19, 1956. The Royal Canadian Air Force took responsibility for cleaning up the crash site.

Title/Description: Jet crash at Villa Saint-Louis Convent in Orleans. The crash was one of the worst air disasters to occur in the Ottawa area, killing eleven nuns, a priest, a servant, and both crew members of the plane.
Photographer: Cliff Buckman, Andy Andrews, Ernie McNulty.
Date: May 15,1956.
Credit: Andrews-Newton Photographers Fonds / City of Ottawa Archives / MG393-AN-043317-005.
Copyright: City of Ottawa Archives.

Explosion at the National Research Council 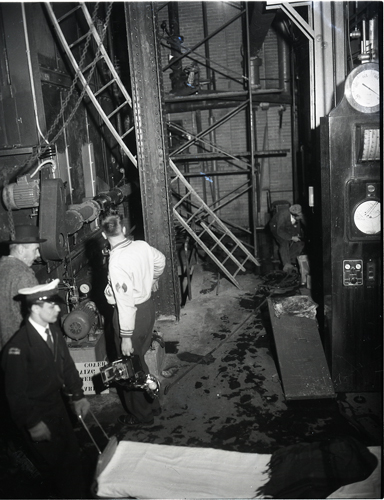 On December 12, 1955, three National Research Council (NRC) employees died when a pipe elbow burst in the boiler room of the heating plant on Montreal Road. Ray Stroud, Jean Seguin and Gerald Carriere died of steam and water burns. Chief Engineer Laurent Farley and Design Engineer Raymond Whinfrey escaped only to realize that three men were missing. Attempts to save the men were unsuccessful.

The Ottawa Citizen reported spreading rumours by locals that the ‘explosion’ stemmed from secret work being carried out at the NRC laboratories.

An NRC  Committee headed the investigation. Evidence had been tampered with and the main scene had been altered, so the Committee had to rely on The Ottawa Citizen to obtain photos and witness accounts. The official report was completed by March 1956, but was a classified document until November 16, 1992. The report suggested that the poor-quality pipe elbow burst after a safety valve was opened. Poor emergency routes as well as insufficient escape doors were also a factor.

On January 2, 1957 a huge fire spread through the Byward Market. It raged through a series of wooden sheds in between Murray Street, Parent Avenue and Clarence Street.

The fire department were notified at 6:45 am and by the time they arrived the flames were up to 150 feet high. Over 300 firefighters worked to extinguish the blaze, which was eventually brought under control after it hit a brick apartment building on Clarence Street. A vacant lot beyond that point prevented the flames from spreading further, and by late afternoon the fire was extinguished.

The fire destroyed two hotels, three apartment buildings, some rooming houses, and several businesses. The Canada House Hotel was the only building on the entire block that survived. Over 150 people were left homeless as a result. Two firefighters sustained injuries after a wall fell on them. Deputy Chief Armand Page was quoted as saying the day after the blaze, “This was the toughest fire to fight I have ever known” (“Three-Way Fire” 3).

It was believed the fire broke out in the book unit and typewriter section of the Public Printing and Stationery building. Fire officials estimated the fire had been smouldering for hours before it was discovered. Damages cost over one million dollars. 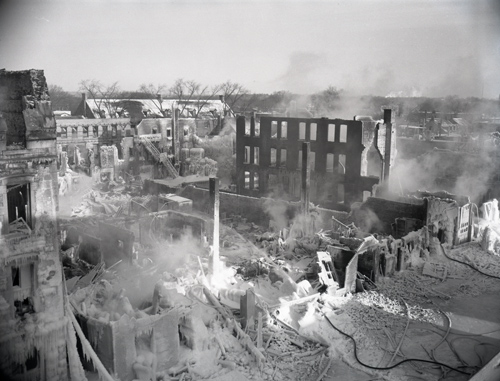 On May 2, 1955, a P - 38 Lockheed Lightning airplane owned by Spartan Air Services Ltd. crashed, killing 34-year-old pilot C. P. McEvoy of Edmonton. The crash occurred on a farm at Johnston’s Corners only minutes after takeoff from the Royal Canadian Air Force Base at Uplands. This was the second P - 38 owned by Spartan Air Services to crash in the vicinity within the year. The first plane had hit McGregor Lake on March 15, 1955, killing both the pilot and navigator.

The owners of the farm witnessed the crash and firefighters from Gloucester Township responded to the scene. The cause remains unexplained.

A massive explosion rocked the Centertown core of Ottawa at 8:17 am on Saturday, October 25, 1958. As an Ottawa Citizen reporter later described, the scene looked “just like a bombed area in wartime London” (Buckman 20).

The explosion occurred at the Addressograph Multigraph building at 248 Slater Street when natural gas seeped into an unused manufactured gas pipe system and into the building. A chemical reaction occurred. When a janitor turned on a light switch, the gas in the air exploded.

Witnesses compared the explosion to an earthquake or bomb. Many downtown buildings on Slater Street, between Bank, Kent, and Laurier streets, lost windows and store merchandise. The Odeon Theatre’s back wall was ripped open, and Myer Motors’ showroom was completely destroyed. Debris caused major traffic problems and 40 people were injured from flying glass fragments. 60 off-duty police and RCMP officers were called in to help police evacuate the area. William J. Anderson, the janitor at the Addressograph Multigraph building, died several days later from injuries sustained in the blast.

Prime Minister Diefenbaker came to the site to view the destruction. Over 25 businesses were closed indefinitely.

The City of Ottawa and the Ontario Fire Marshal worked closely with government officials to investigate the explosion. A ‘Civic Committee of Inquiry’ was formed on October 28. Public hearings began immediately, and federal experts were called in assist in the inquiry.

By October 29, all streets except Slater were deemed safe for businesses and pedestrians. The following day demolition began on the Odeon Theatre, Jackson Building, and the Addressograph Multigraph building, allowing investigators to examine the center of the blast. Prince Phillip arrived in Ottawa on October 31 to view the explosion site and question officials. Overall, the entire incident cost the government two million dollars in damages. 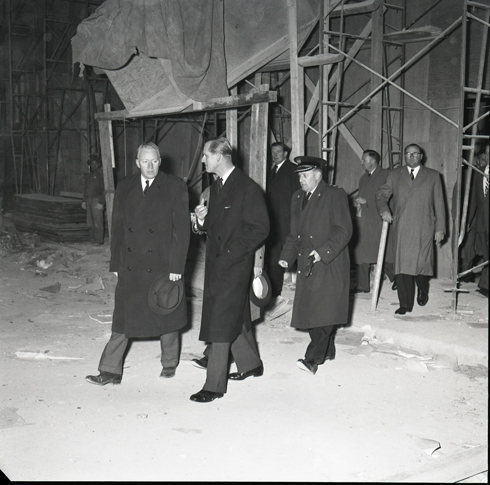 Title/Description: H.R.H. Prince Phillip at the site of an explosion at the Addressograph Multigraph of Canada Ltd. Building. The Slater street explosion destroyed buildings, blew out windows, destroyed merchandise and resulted in over 25 businesses to be put indefinitely out of business. Prince Phillip arrived in October of 1958 to view the damage and make inquiries with officials.
Photographer: T.
Date: October 30, 1958.
Credit: Andrews-Newton Photographers Fonds / City of Ottawa Archives / MG393-AN-060432-001.
Copyright: City of Ottawa Archives.