Post-war Ottawa underwent a dramatic phase of growth and expansion. As Ottawa’s importance grew both nationally and internationally, it became an attractive venue for entertainers. Throughout the 1950’s, a number of big-name performers graced Ottawa’s stages, including Fats Domino, Josephine Baker, Jerry Lee Lewis, Johnny Cash, Tony Bennet, Duke Ellington, and teen idol Paul Anka. But, perhaps the most important entertainer to visit the city was Elvis Presley. 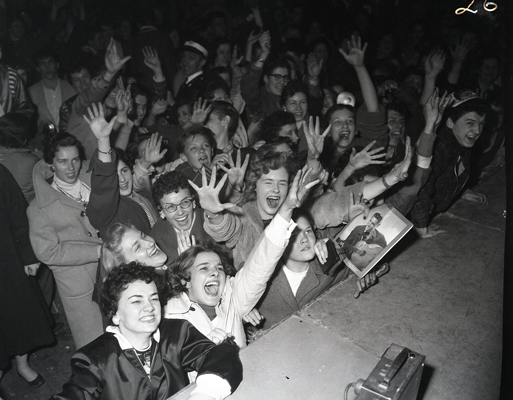 Perhaps there was no greater pop-culture event in Ottawa during the 1950’s than the Elvis Presley concerts held at the Auditorium in April 1957. Presley embodied the spirit of rock n’ roll, a new phenomenon unfamiliar to adults. His presence in the city sent thousands of teenagers and young adults into fits of impassioned hysteria.

The “King” arrived in Ottawa on April 3, 1957. Teenagers traveled from as far as Montreal to attend the shows. A special train, nicknamed the “Rock N’ Roll Cannon Ball” was packed with over 500 concert-goers. When Presley stepped onto the stage, the audience of over 9,000 were so loud it was almost impossible to hear Presley singing. The fans were in a frenzy of Elvis worship: “some wept, some moaned; some clutched their heads in ecstasy; everybody screamed, stamped, clapped hands, flailed arms, one person got down on all fours and pounded the floor” (Parmeler 13). The police were out in record numbers because there was concern that the screaming fans would rush the stage.

Elvis Presley was a controversial entertainer because his ‘suggestive’ pelvis thrusting and dance moves scandalized many parents and authority figures. The Notre Dame Convent, viewing Presley as immoral and un-Christian, forbade its students from attending the concert. Eight students were expelled after going to see the King, and controversy gripped the city. The nuns later nullified the expulsions, but at least half of the girls remained enrolled in different schools. Elvis Presley definitely made an impression on Ottawa. 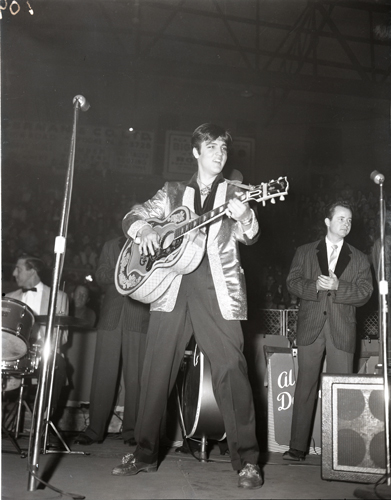 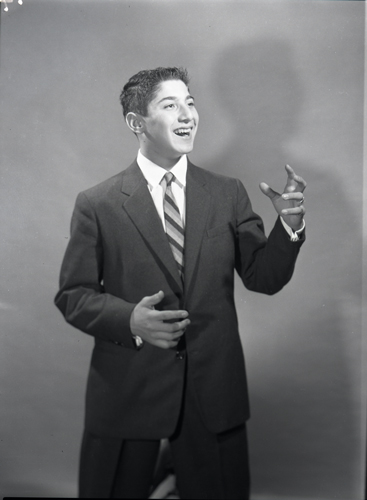 Title/Description: Portrait of Paul Anka. Anka was born in Ottawa and became rose to become one of the greatest selling musicians in North America. His first song "Diana," written about his Ottawa baby-sitter, reached the top of the charts in only a few weeks. He went on to write hit after hit throughout the 1950's and 1960's. Anka is also famous for compositions written for other singers, such as Frank Sinatra and Tom Jones.
Photographer: Doug Bartlett.
Date: December 1956.
Credit: Andrews-Newton Photographers Fonds / City of Ottawa Archives / MG393-AN-P-003195-014.
Copyright: City of Ottawa Archives.

Singer Paul Anka was born in Ottawa on July 30, 1941. Anka showed a remarkable talent for music at an early age, often favouring his music over his studies at Fisher Park High School.

His father wanted him to focus on his studies, and sent him to live with his uncle in Hollywood. In 1957, Anka managed to travel to New York, and pitched his music to record companies there. By the age of 16, Paul Anka became one of the first Canadian rock n’ roll stars with the release of the self-composed single ‘ Diana ’.

Anka was no ‘one-hit-wonder’. The list of songs composed by Anka is surprising and extensive. He successfully followed up on “ Diana ” with a number of hits including, “ Put Your Head on my Shoulder, ” “ You are my Destiny ,” “ Puppy Love ,” and “ Lonely Boy .” He also wrote “ My Way ” for Frank Sinatra and “ She’s a Lady ” for Tom Jones. He composed the theme song for The Tonight Show. He once said about his writing:

I can feel something making me write! It scares me sometimes, because I have a feeling it’s something outside of me coming in and taking over. I have to sit down and write, and everything falls into place. Sometimes I change a note or syllable later, but not much (Gardener 283).

By 1957, Anka had earned over $100,000; in 1958 this amount increased to $400,000. He became involved in Hollywood films, contributing as an actor, singer, and composer. Anka received a number of awards and recognitions, including 15 gold records and the 1961 Young Canadian Award. 1972, Mayor Pierre Benoit awarded him the key to the city, and declared August 27 “ Paul Anka Day ”.

Hi! We are conducting a survey to see how we can improve content on Ottawa.ca. The survey takes about 10-15 minutes to complete, and all responses are kept strictly confidential.