The 1940s and 1950s saw rapid growth in Ottawa. People began to embrace urban life, causing a boom in the construction of new homes for the expanding city. Understanding the need to plan for the future, the City began a balancing act between improving the services for citizens, and the needs of the federal government. Major changes to the City's infrastructure revolutionized the face of Ottawa, including:

The suburban landscape expanded when, in 1950, large amounts of land were annexed from Nepean and Gloucester. The result was a city five times larger than it had been just a year before. 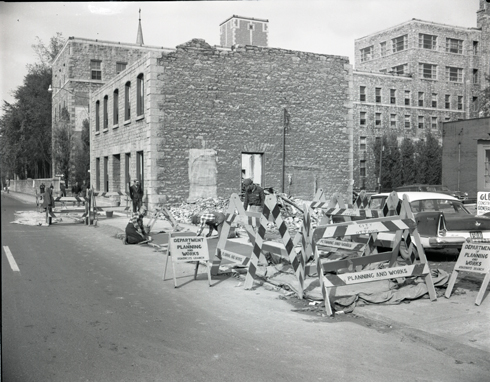 Title/ Description: Sidewalk repairs on Sussex and Bruyere streets. Ramps were put in place to assist in the demolition of an old building. During the 1950's, Ottawa was rapidly expanding. With a growing population and a booming economy, the city infrastructure had to be improved to accommodate these changes.
Photographer: G. D.
Date: October 26, 1959.
Credit: Andrews-Newton Photographers Fond / City of Ottawa Archives / MG393-AN-A-004606-001.
Copyright: City of Ottawa Archives.

Built in 1954, the Mackenzie King Bridge was designed to ease traffic downtown. The City of Ottawa contributed $300,000 towards construction. Today, the bridge remains a major transit route for commuters and buses heading downtown. 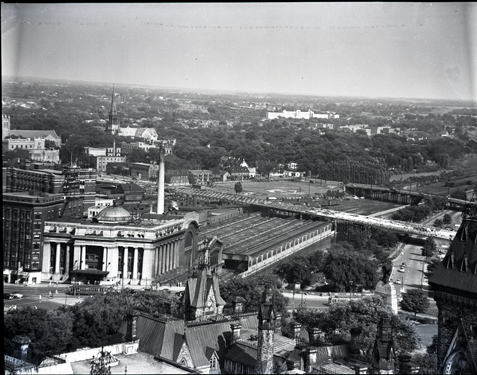 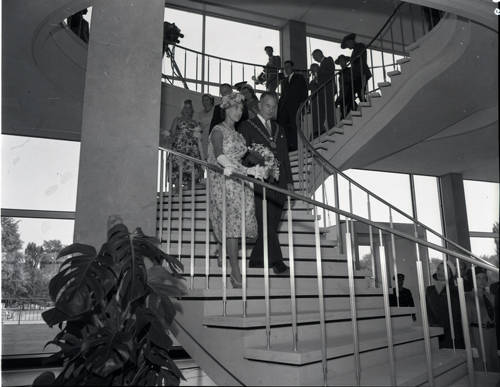 After a major fire ripped through Ottawa City Hall in 1931, the City and its staff were left without a permanent home. For 25 years following the fire, the City conducted business out of a rented downtown office space.

In September 1955, a national competition to design the new City Hall was launched. What made the competition increasingly difficult was a lack of consensus over the location of the new building. Three short months later, the Montreal-based architectural firm Rother, Bland and Trudeau were announced as the winners. Finally, after considering 36 different locations, Green Island was confirmed as the new location on January 31, 1956.

An official sod turning ceremony was hosted by Mayor Charlotte Whitton on September 16, 1956. The summer of 1958 was greeted with excitement, as Ottawa once again had a City Hall. The new building, boasted a stone and glass construction, and featured a marble spiral staircase leading to the second floor.

City Council held its first meeting at the new location on July 21, 1958. Princess Margaret officially opened the building on August 2, 1958, during a large formal reception with over 350 guests. This building remained Ottawa’s City Hall until municipal amalgamation came into effect on January 1, 2001. 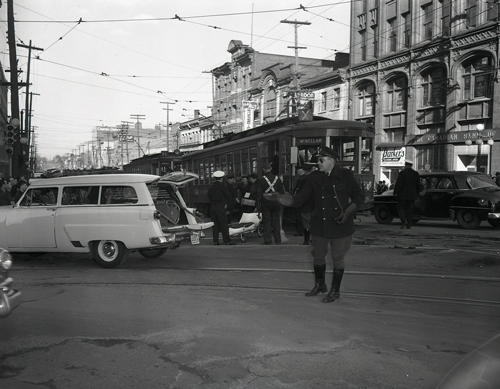 Title/Description: Street car crash on Sussex and Rideau streets. Automobiles in Ottawa were forced to navigate around the cumbersome streetcars, which caused actions such as this. When the streetcars were removed in 1959, the flow of traffic was much improved, and fewer accidents occurred.
Photographer: Unknown.
Date: April 17, 1954.
Credit: Andrews-Newton Photographers Fond / City of Ottawa Archives / MG393-AN-NP-030847-001, MG393-CA-003911-001.
Copyright: City of Ottawa Archives.

Driving down the street in Ottawa during the 1940s and 1950s was a very different experience than it is today. The increasing number of cars on the streets were forced navigate around streetcars, the city’s main mode of public transportation. Operated by the Ottawa Electric Railway Company, the private enterprise ran into financial difficulties when they were forced to pay high federal taxes on the aging system after the Second World War. Ridership remained strong in 1947 and 1948, but complaints about the system were growing. The City purchased the beleaguered system in 1948 and the Ottawa Transportation Commission was born.

Transit expert Norman Wilson was asked to see if the City should continue running the streetcars or implement bus services. His report brought forward several concerns, including the significant cost of running streetcars over buses, the high cost of installing new tracks and lines as well as the potential difficulty finding replacement parts. He concluded that the streetcar system should be abandoned once funding for buses became available.

In 1959, the Ottawa Transportation Commission faced a growing debt that required major changes. The decision was made to discontinue streetcar service and convert the entire transit system to a more cost-effective bus service. The last streetcar ran on May 1, 1959, and a parade commemorated the event. The overhead wires were removed and the tracks ripped up. In the following weeks downtown traffic flow improved significantly. 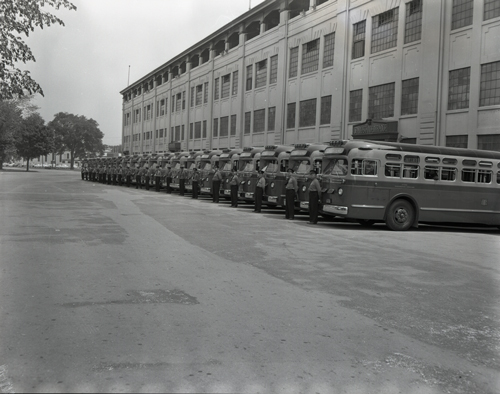 As the end of the Second World War approached, Ottawa was heading for a population explosion. Between 1941 and 1956, Ottawa’s population skyrocketed from 206,367 to 287,246 - an increase of over 80,000 people in 15 years. The growing population, caused by soldiers returning from war and civil servants permanently relocating to Ottawa, meant that housing was in short supply.

By 1945, a plan had been drawn to erect 200 houses near Carling Avenue and Merivale Road. Township councils approved residential construction, and Ottawa found itself in a housing boom. It was during this period that developers such as Minto, Teron and Campeau began to develop the city we know today.

Campeau began a two-year construction project on the 60 acre Billings Bridge sub - division in 1950, also building homes for National Defence at Uplands Airport as well as various houses and apartment buildings around the city. In other areas of the city, Teron Construction developed Lynwood Village, and much of Bells Corners, while Minto focused on construction in the south-western part of the city around Centrepointe, and Bayshore. 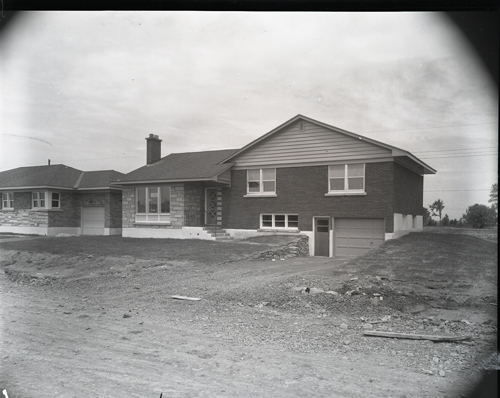 Like many cities across the country, Ottawa’s stores were largely family-run businesses offering good customer service to their loyal patrons. But, in 1954, the shopping in the city changed with the opening of the Westgate shopping centre. The first of its kind in the city, the centre was originally an open-air structure and featuring 18 stores.

By 1969, Ottawa had close to 20 shopping centres. Although the growing presence of shopping malls in the city was not always viewed in a positive light, many customers embraced the convenience of the centres.

With the development of large-scale shopping centres in the outer edges of the city the challenge became to keep some shoppers in the downtown core, which was not designed for modern traffic. In 1960, the City performed an experiment, closing Sparks Street to traffic and turning it into an outdoor pedestrian mall. It was a big hit with Ottawa residents. Initially the Sparks Street mall was only open during the summer months, but by June 28, 1967 the mall was open year-round. Today, Sparks Street is a major tourist attraction that has accomplished its original mission: to keep shoppers downtown. 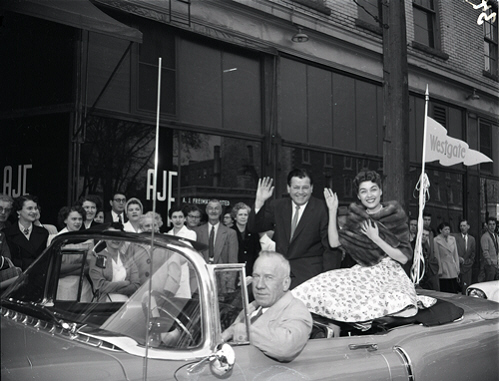 Title/Description: Opening of Friemans at Westgate Shopping Centre: parade. Westgate shopping centre was the first mall constructed in Ottawa. It was not long until other such shopping centres sprang up all over Ottawa. Malls gave residents who lived outside of the downtown core access to one stop shopping.
Photographer: Unknown.
Date: May 12, 1955.
Credit: Andrews-Newton Photographers Fond / City of Ottawa Archives / MG393-AN-NP-036550-034.
Copyright: City of Ottawa Archives.