During the post-war years, Ottawa grew at an astronomical rate. In 1945, the city was home to 166,000 people, and had an area of 6,100 acres. After the 1950 annexation of Gloucester and Nepean, by 1955 the population had ballooned to 223,000 living on a sprawling 30,000 acres. Gréber, with his ability to accentuate the natural beauty of a city, was bought in to control urban sprawl and determine proper land use.

Much of how Ottawa looks today is the result of the recommendations by the Gréber Report. The walking trails along the east side of the Rideau Canal and the location of the Queensway are both a direct result of the decision to remove the rail lines from downtown. 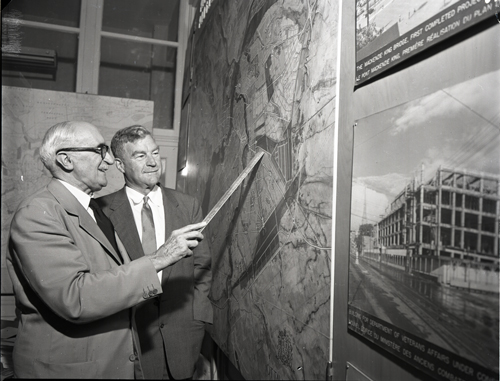 Title/Description: Jacques Gréber and Gerard Kennedy at a press conference for the Federal District Commission. The Gréber Report laid out the future look and feel of Ottawa. One example of Gréber's recommendations was the creation of the Greenbelt.
Photographer: D.
Date: July 5, 1955.
Credit: Andrews-Newton Photographers Fond / City of Ottawa Archives / MG393-AN-037503-002.
Copyright: City of Ottawa Archives.

Wartime Ottawa was an industrial place. Huge rail yards stood behind the train station on Wellington Street, with tracks running along the eastern side of the Rideau Canal. It was noisy and dirty, and in Jacques Gréber’s opinion, the rail line had to go.

After reading Gréber’s plan, the decision was made to relocate the downtown rail yards to Walkley Road, drastically reducing the number of trains coming into the city’s core. Passenger service was moved from Union Station to a 6,600 -acre site near Hurdman’s Bridge. The Federal District Commission (FDC) arranged a land exchange with both the Canadian National Railway and the Canadian Pacific Railway, giving them the land for their freight yards, while the FDC would then get all of the railway right-of-ways through Ottawa. Upon the transfer of land, 22 acres of prime downtown land became available. Many industries migrated away from the downtown to be closer to the new railway facilities.

It was the decision to remove CN rail lines that allowed space for the Queensway to run through the city.

Title/Description: Construction of Queensway at Carling Ave. Text which accompanied negatives, "Queensway Approach… The new Queensway as it crosses Carling near Kirkwood gives the City Bound Traveller a new view of his target. From this point of view can be seen the Westgate shopping center, right center, and the Island Park water tower. The clover-leaf-type pattern of roads is now in the process of being poured."
Photographer: Andy Andrews.
Date: June 29, 1959.
Credit: Andrews-Newton Photographers Fond / City of Ottawa Archives / MG393-AN-A-000224-001.
Copyright: City of Ottawa Archives.

As Ottawa grew, so too did the number of cars on the road. The increased traffic proved to be too much for the city’s infrastructure. After two consultants’ reports and a full traffic survey, it was determined that most drivers were going into the city itself. In order to accommodate this influx of people, the decision was made to build a highway using the right-of-ways for the CN rail lines. Shortly after the rails were removed, construction on the east-to-west highway began.

The route was named after Queen Elizabeth II, who kicked off construction by setting off a charge of dynamite during a four-day visit to Ottawa in 1957. She returned in 1960 to open the first section of the Queensway to traffic. 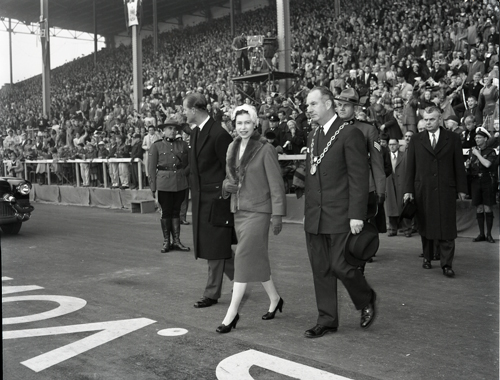 Cleaning up the City

With a desire to accommodate Ottawa’s natural beauty, Gréber had a specific vision for Ottawa. Above all, Gréber’s set his sights on the downtown core, the Ottawa River and rejuvenating run-down neighbourhoods

At the time, Ottawa did not have sewage treatment facilities, and everything flowed directly into the river. In the late 1950s, the City began constructing sewage treatment plants. This move greatly improved the quality of the water, establishing the river as a major attraction running through the city.

Creating more attractive neighbourhoods also became a priority. Having developed a negative reputation, the area around Lebreton Flats became a focus for redevelopment. Officials decided that the housing was substandard and overcrowded, with many of the homes being occupied by more than one family. In 1962, the 154 acre site was expropriated by the National Capital Commission (formerly the Federal District Commission), and remained vacant until the Canadian War Museum was built on it. 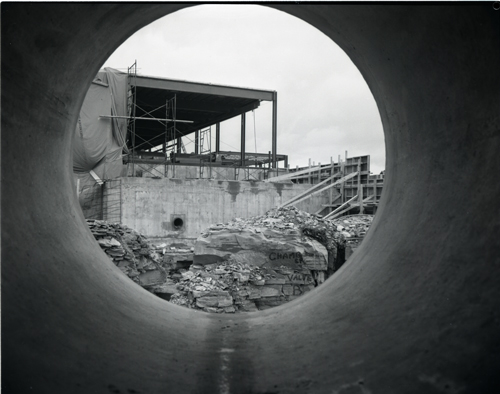 Many of the buildings used for government offices in the post-war years were temporary buildings that were never intended to be permanent structures. The transitory natures of these buildings lead to a great deal of discussion about where the offices should be located. After intense discussion, some government departments remained close to Parliament Hill, while others, including many administrative and research facilities were moved to more suburban areas such as Tunney’s Pasture. The temporary buildings were demolished once the new buildings were complete.

Title/Description: Treasury Staff at room 227, Langevin Block. Many government employees migrated to Ottawa to work in various federal departments during the Second World War. After the war was over, many continued to live here. When this was combined with soldiers returning from overseas, Ottawa experienced a population explosion.
Photographer: D. Gall.
Date: June 16, 1958.
Credit: Andrews-Newton Photographers Fond / City of Ottawa Archives / MG393-AN-NP-058019-003.
Copyright: City of Ottawa Archives.

Gréber’s Greenbelt project was designed to serve one main purpose reason: to keep the city contained and prevent urban sprawl. Following Gréber’s plans, the Federal District Commission began purchasing land in 1956. At the time, projections suggested that there would be room for residential development within this area until around 1965. However, land prices inside the Greenbelt were much higher than land prices elsewhere, so developers began building communities just outside the boundaries. Unfortunately, the project did not take into consideration just how quickly the population of the city was growing.