During his time in office he attended the coronation ceremony of King George VI, he received the King and Queen in Ottawa in 1939, and was awarded an honorary degree from the University of Ottawa in 1941.

In 1948, Lewis had a serious heart attack, leading to his decision to resign as the city’s mayor.

Lewis was very involved with the Ottawa Hydro Electric Commission, both while he was mayor and after his time in office. He worked with them from 1936 to 1948, and again from 1951 until March of 1970. He was their chairman from 1953 until January 1970.

In his later years he was very involved with charities. He died on August 18, 1970 following another heart attack. 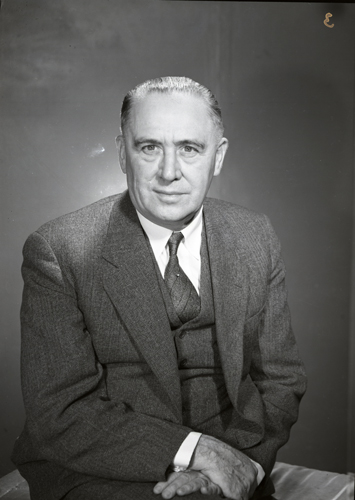 During his two-year term as mayor, Bourque oversaw the annexation of large portions of Gloucester and Nepean into the City of Ottawa. During his term, the City contributed $300,000 towards the costs of the Mackenzie King Bridge construction.

Mayor Bourque was in favour of the federal government’s plans to beautify Ottawa, but he wanted to make sure that the city taxpayers were not unfairly burdened with the costs of the project. He also supported the idea that Ottawa become part of a federal district, similar to that of Washington, D.C in the United States.

Mayor Bourque was on the executive of the Central Canada Exhibition Association, and the Association of Mayors and Municipalities. He received an honorary doctorate in Business Administration from the University of Ottawa. Bourque died on May 2, 1962.

Grenville Goodwin grew up in Prescott and came to Ottawa to attend Lisgar Collegiate in 1911. After returning home from overseas after the First World War, Goodwin attended the University of Toronto before heading to Detroit to study optometry. He worked as an optometrist, opening his own business in 1926.

Goodwin was very involved in the community, serving as a member of the Board of Control from 1942 to 1946, member of the police commission and Chairman of the National Capital Planning Committee’s publicity committee to name a few.

Mayor Goodwin is most commonly remembered for his very sudden and unexpected death only eight months after his term began. Goodwin had a heart attack while doing his grocery shopping, had a second heart attack at the hospital a few hours later, and died on August 27, 1951, at the age of 53. 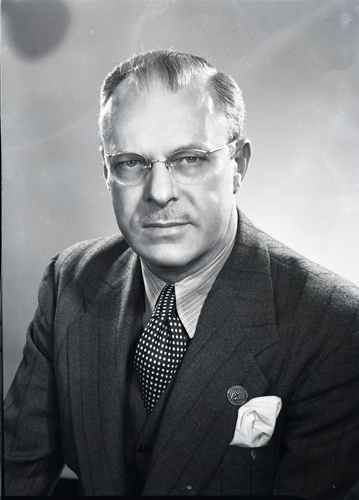 Title/Description: Portrait of Mayor Charlotte Whitton. Whitton was Ottawa's first female Mayor. She came into office in 1951 after Mayor Grenville Goodwin passed away suddenly and remained in office until the end of 1956. Whitton was outspoken, passionate and often butted heads with City councillors. She returned to municipal politics in 1961 and remained Mayor until 1964.
Photographer: Doug Bartlett.
Date: June 9, 1954.
Credit: Andrews-Newton Photographers Fond / City of Ottawa Archives / MG393-AN-P-002249-012.
Copyright: City of Ottawa Archives.

Charlotte Whitton was a colourful character, known as much for her strong temper and volatile working relationships with other staff and council members as her political decisions. She was Mayor of Ottawa from August 1951 to the end of 1956, and again from 1961 until the end of 1964.

Whitton was a well-known social worker and author, having founded the Canadian Council on Child Welfare. In 1950 she made the decision to run for office and was the first woman to be elected to the Board of Control. In August 1951, after Mayor Grenville Goodwin died suddenly, Whitton became the first female mayor of a major Canadian city.

Mayor Whitton was a strong supporter of the monarchy. Outstanding moments in her term included the Royal Visit by Princess Elizabeth and Prince Philip in 1951 and attending the coronation of Elizabeth II in 1953.

Whitton accomplished a great deal during her time as mayor, including the beginning of construction on the new City Hall on Green Island. She also oversaw the building of a significant number of affordable housing units, had an old hospital renovated into a senior citizens complex, and greatly increased the city’s revenue from federal government grants.

In 1956 Whitton decided to run for a seat in the House of Commons as the Progressive Conservative candidate for Ottawa West. Whitton lost the election to the Liberals by a little over 1000 votes. By the end of 1960, she decided to run for mayor again and won the election. She continued to have a poor working relationship with the members of City Council, resuming a tumultuous relationship with council members and staff alike.

After losing an election in 1964, Whitton returned to the City as an alderman in 1966, a position she held until late in 1972 when she fell and broke her hip. Whitton died in January 1975, just a few weeks after suffering a heart attack. She was the first former mayor to lie in state at City Hall, which allowed people to pay their respects during a public visitation. 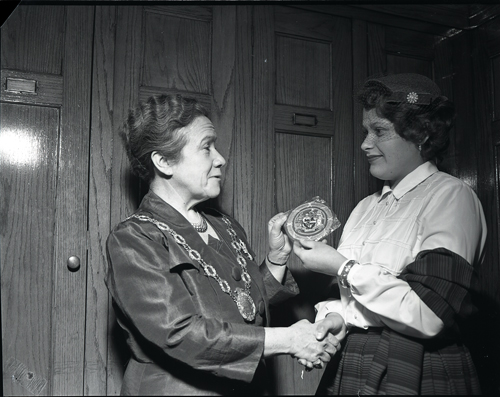 George Nelms came to Canada in 1912 from Oxford, England. In 1938, Nelms founded George H. Nelms Opticians. He was elected to the school board in 1942. Nelms served on the Board of Control for a number of years before becoming mayor from 1956 to 1960. During his time as a controller and then as mayor, Nelms was involved with a number of large construction projects including the Queensway, the new Ottawa City Hall, the Britannia Filtration Plant and the Macdonald-Cartier Bridge.

His time also featured many significant events including, most notably, the 1957 Royal Visit by Queen Elizabeth and Prince Philip who came to Ottawa to inaugurate construction on the Queensway. However, his time as mayor also had some challenges, including a gas leak explosion on Slater Street which destroyed two office buildings and a theatre. 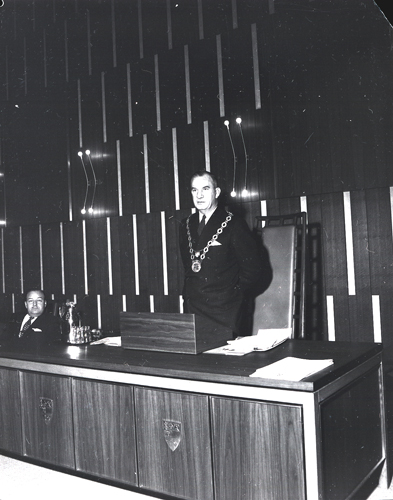