Sports have always been an important part of community life in Ottawa. From baseball to hockey and everything in-between, residents of this city were captivated by sports. In the post-war years, the Ottawa Rough Riders won the Grey Cup and many Olympic medalists returned in triumph. But, the sporting culture existed on a much smaller arena, with Ottawa’s citizens participating in a wide variety of recreational sports including curling, golf, tennis, rowing, hockey, baseball and skating.

But the games didn’t always play out on the field. In the 1950s, steadfast sports fans clashed with conservative opinions over the issue of holding sporting events on Sunday. Mayor Charlotte Whitton launched a campaign against Sunday sports, and a municipal referendum in December 1952 ruled out any possibility of change. After three public votes, opinions shifted, and by 1965 Sunday sporting events were allowed in Ottawa.

In 1954, several factors impacted Ottawa and left the city without any professional-league teams in hockey, football, or baseball. 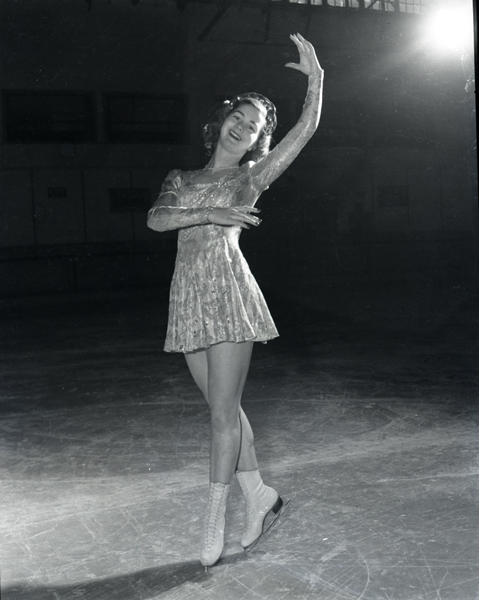 At a time when most pre-teens were discovering makeup, 11-year-old Barbara Ann Scott was skating her way into the history books.

After winning the Junior Ladies’ category at the 1940 National Figure Skating Championships, she advanced to second place in the Senior Ladies’ Category the following year. In 1943, she made history by becoming “the first woman to land a double Lutz in competition” (Woods 83).

On March 7, 1947, the City of Ottawa gave Scott, who trained in Ottawa, a convertible and held a victory parade to celebrate her victory at the 1947 World Championships. Soon after, Olympic officials cautioned her that keeping the car would jeopardize her amateur athlete status. She returned the car and went on to compete in the 1948 Winter Olympics.

After Scott won gold at the Olympics, the City returned the car to her and held another parade and civic reception. Scott was also awarded the Key to the City in a ceremony attended by 30,000 people. 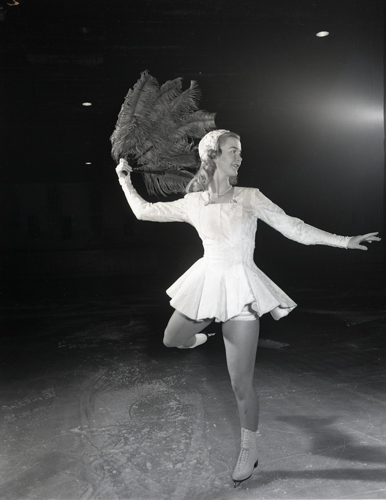 Olympic Gold medalist and Ottawa native Anne Heggtveit started skiing at the tender age of two. Her athletic abilities attracted attention early on, and at six she began making a name for herself in the local skiing community.

In March 1960, Heggtveit announced her retirement from competitive skiing at the age of 21. She had realized her dream of winning an Olympic Gold medal, and chose to settle into a less hectic lifestyle.

March 10, 1960 was officially declared Anne Heggtveit Day. Heggtveit’s homecoming included six bands, a parade and an evening reception with 500 guests in attendance, including Prime Minister Diefenbaker. There was also a message from the Queen. The city presented her with a silver tea service, and a few weeks later, after a public fundraising campaign, a car.

Title/Description: Skier Anne Heggtveit, 1960 Olympic gold medalist at Camp Fortune. Heggtveit was supposed to be on vacation when this image was taken, as she had just returned from Europe after winning a number of competitions there. Even in her off-time, she was still wearing skis.
Photographer: Bill Lingard.
Date: February 15, 1959.
Credit: Andrews-Newton Photographers Fonds / City of Ottawa Archives / MG393-AN-A-000675-001.
Copyright: City of Ottawa Archives.

Jackson joined Ottawa’s Minto Skating Club in 1954 after the rink in his hometown of Oshawa was destroyed in a fire. He had made plans to train in England when he was invited to skate in the Minto Follies ice show. This led to a sponsorship with the Minto Skating Club, which helped to advance his career.

Jackson won the Junior Men’s title at the National Championships in 1955 – the first time he had attended the competition. He continued to skate well, placing second in the Senior Men’s category in 1956 and 1957. In 1957, he made his first trip to the World Championships where he placed seventh. After the championships Jackson decided to change coaches and moved to New York City to train.

Over the next few years Jackson advanced in the international standings, winning bronze at the 1960 Olympics. He took skating to new heights at the world championships in 1962 by becoming the first person to land a triple Lutz in competition. It would be 1972 before another skater could repeat this feat. Jackson also won the Lou Marsh Trophy in 1962.

After the 1962 World Championships, Jackson went on to professional skating and later became a coach at the Minto Skating Club. 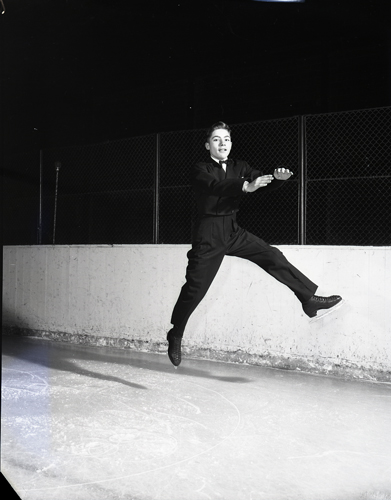 Marilyn Bell made swimming history in September 1954 when she became the first person ever to swim across Lake Ontario. She was only 16-years-old at the time.

In the summer of 1954, the Canadian National Exhibition had asked well-known distance swimmer Florence Chadwick if she would swim across Lake Ontario. Winnie Roach Leuszler, a Canadian distance swimmer, decided to take the challenge. Bell also chose to attempt the swim. On the evening of September 8, 1954, the three women began swimming. A small boat accompanied each swimmer.

After hours fighting high waves, currents, lamprey eels and fatigue, Chadwick was forced to stop around the half-way mark. Leuszler experienced muscle cramps and stopped after making it three quarters of the way. By mid-afternoon the next day, people throughout Toronto realized that the only person still swimming was Bell. Crowds began to form at the exhibition grounds where she was expected to reach shore.

As Bell approached the shore at Sunnyside, the Toronto Harbour Master decided that if she could reach the breakwater a few hundred meters off shore, it would be enough. She had been in the water for almost 21 hours and had swum significantly more than the original estimate of 32 miles. While the exact distance will never be known it is thought Bell had swum closer to 40 or even 45 miles.

Bell was presented with a convertible and $10,000 from the Canadian National Exhibition at a reception in her honour.

Marilyn Bell won the Lou Marsh Trophy in 1954. She went on to swim the English Channel during the summer of 1955. After the swim, on her way back from Europe, Bell made an unexpected trip to Ottawa when her flight was unable to land in Montreal due to fog. A reception of nearly 200 people greeted her arrival. 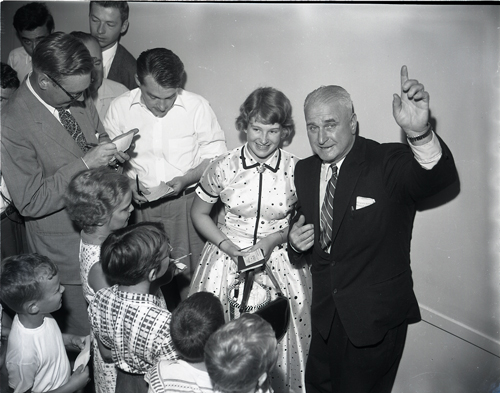 Title/Description: Marilyn Bell, marathon swimmer. This photograph was taken when Bell's plane was diverted to Ottawa en route to a reception in Toronto. She was greeted by a crowd of fans and is seen here signing autographs.
Photographer: Unknown.
Date: August 19, 1955.
Credit: Andrews-Newton Photographers Fonds / City of Ottawa Archives / MG393-AN-038014-002.
Copyright: City of Ottawa Archives. 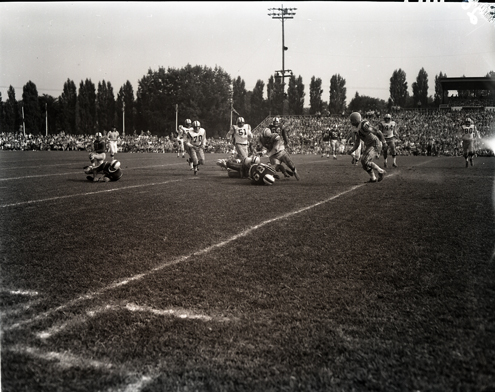 Title/Description: Football game between the Ottawa Rough Riders and Hamilton Tiger Cats. Russ Jackson was known as the most famous Rough Rider as well as the one of the best Canadian quarterbacks ever to play in the CFL. Just before the disastrous Eastern Final against the Hamilton Tiger Cats in 1959, Jackson injured his ankle and could not play. The Rough Riders lost to Hamilton with a final score of 23-14.
Photographer: Unknown.
Date: September 26, 1959.
Credit: Andrews-Newton Photographers Fonds / City of Ottawa Archives / MG393-AN-A-004218-028.
Copyright: City of Ottawa Archives.

Football became a very popular sport after the Second World War. Many military troops had passed the time playing football while overseas, often returning to Ottawa with a love for the sport.

The Ottawa Rough Riders were part of the ‘Big Four’, the Interprovincial Rugby Football Union between football teams in Toronto, Montreal, Hamilton, and Ottawa. With the support of Ottawa fans and Head Coach Clem Crowe, the team won the Grey Cup of 1951 against the Regina Roughriders, with a score of 21 – 14 . Sadly, as the decade progressed the team began losing, and the Rough Riders faced problems in management, game performances, and fan support. Coach Crowe was fired in 1954 and replaced by Chan Caldwell.

The 1960s were viewed as Ottawa’s ‘golden age’ of football. During this decade, the Rough Riders won three Grey Cups: 1960, 1968, and 1969. Although the team experienced many difficulties, their successes were widely celebrated. The Rough Riders brought the community together after the Second World War and fuelled the passion for the game among players and fans.

Many people consider hockey a truly Canadian sport. The history behind the Ottawa Senators hockey team illustrates this passion: the love for hockey.

The Ottawa Senators belonged to the National Hockey League (NHL) from 1917 to 1934. After struggling with increased costs in the 1920s, the Senators began to sell their most popular team members to pay off debts. Selling talented players in exchange for money was common for hockey teams. All operations ceased by 1931 due to increasing debts, and the Senators leased the rest of their players within the league. Many of the original team members returned to Ottawa after it was announced a senior league team would play in the Quebec Amateur Hockey Association. Eddie Finnigan and Syd Howe, among others, joined the Senior Senators. Tommy Gorman, the managing director, led the team to the Allan Cup title on May 7, 1949 after beating the Edmonton Flyers in the East-West finals.

The team’s success was short-lived. During the 1950s, attendance fell and the Senior Senators failed to win games. Tommy Gorman announced the team’s withdrawal from the Quebec League in December 1954, blaming the NHL televised games for their demise.

The Senators’ return to Ottawa and the NHL in the 1990’s was celebrated among hockey fans. In 1996, the Kanata arena now known as Scotiabank Place became their official home rink. 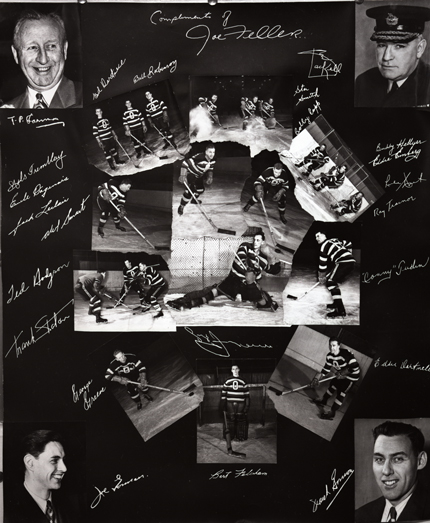 Title/Description: Autographed Senators hockey team photograph (copy). This collage was created at the height of the Senators successes. During the following decade, falling attendance rates and a decline in victories resulted in the closing of the franchise until the 1990s.
Photographer: Unknown.
Date: February 21, 1950.
Credit: Andrews-Newton Photographers Fonds / City of Ottawa Archives / MG393-AN-P-001003-001.
Copyright: City of Ottawa Archives. 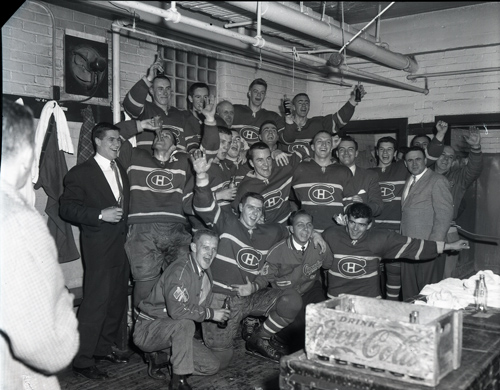 The Hull - Ottawa Canadiens, a farm team of the Montreal Canadiens, were a Senior “A” league team in the Ontario Hockey Association (OHA) from 1956 to 1959. From 1959 to 1963, the team played in the Eastern Professional Hockey League (EPHL), coached by Sam Pollock and Scotty Bowman.

On May 6, 1958, the Hull-Ottawa Canadiens defeated the Regina Pats 4 – 2 to win the Memorial Cup. They were the first Ottawa-area team to win the trophy. Over 5,000 fans revelled in the win, described by sports columnist Jack Kinsella:

[…] scenes of wil[d] delight and even mild hysteria that followed upon the final siren must be entirely pardonable. Memorial Cups don’t come along every year. In fact, around here they have been even scarcer than hockey fans, although there is no discounting the admirable support received in the fine series just completed (Kinsella, “Habs” 17). 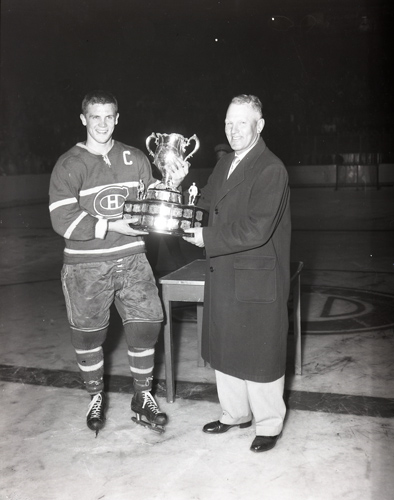 After a 53 year hiatus, post-war Ottawa witnessed a brief re-appearance of baseball when the minor AAA Ottawa Giants arrived in 1951. Sadly, they placed seventh in an eight-team league that year, and drew a meagre 132,000 fans over 77 home games at Lansdowne Park. They were disbanded after only one season. 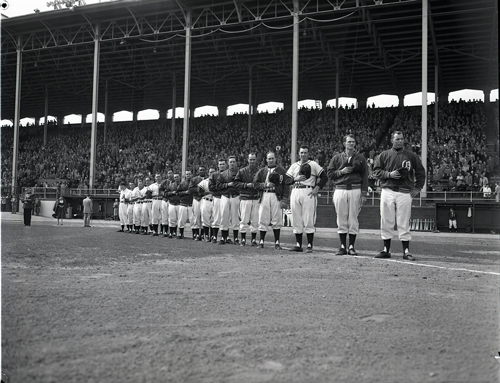 Recreational sports in the community

Ottawa’s recreational sports scene was exceptionally diverse in the post-war years leading up to 1960. Recreational sports teams offered people the benefits of an active lifestyle, and promoted a sense of community to participants and viewers alike. The Ottawa Citizen provided coverage of major sporting events and competitions.

Title/Description: Flooding of the first city owned and operated indoor ice rink, the Elmgrove Arena. Previously, the majority of ice rinks in Ottawa were outdoor structures, and the indoor rinks were privately owned. The intent with the Elmgrove Arena was to provide shelter to hockey players and skaters so they would not be at the mercy of the Ottawa winter. Other such arenas followed in the proceeding years.
Photographer: Andy Andrews.
Date: December 23,1959.
Credit: Andrews-Newton Photographers Fonds / City of Ottawa Archives / MG393-AN-AH-000551-001.
Copyright: City of Ottawa Archives.