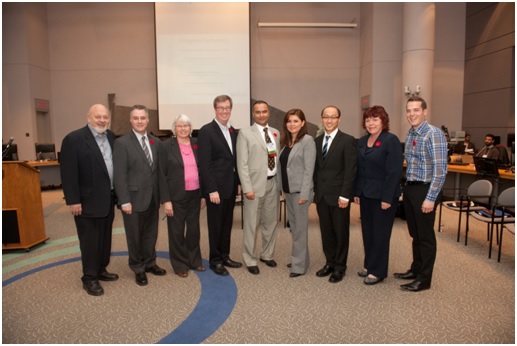 The 2013 Immigrant Entrepreneur Awards were presented to three local business people – Manu Sharma, Julia Chen, and Ysabel Li-Lopez – whose business success and spirit have contributed to the local economy and serve as an inspiration to new Canadians to start their own businesses.

The award ceremony was held in Council Chambers at Ottawa City Hall on October 31, 2013, as part of the TiE (The Indus Entrepreneurs) Conference luncheon. TiE is an international association that has chapters in cities around the world, including Ottawa, which provide a network to help entrepreneurs connect, share leading practices and mentor new entrepreneurs.

Manu Sharma came to Canada in 2002 as an international student and co-founded OAK Computing in 2007 – a software and development firm. Over the years, he has grown his business in terms of both the number of employees and annual revenues. In addition to his business contribution, Manu has volunteered more than 3,000 hours in the community, and mentors new Canadians to become entrepreneurs.

Julia Chen is the CEO of Advanced Machine and Materials Incorporated – a leading powder manufacturer in the Solar and Semiconductor industry. After five years of operation, the company has grown to $1 million in annual sales worldwide. Julia volunteers with the Hunan Fellow Association of the National Capital Regions of Canada, and helps to mentor other local immigrant entrepreneurs, especially women originally from China.

Ysabel Li-Lopez moved to Canada in 2006. Following the birth of her son in 2010, Ysabel started her e-commerce business. Nurture-Elle is a leading supplier of designer nursing apparel in Canada and the U.S. Ysabel also works full-time at the YMCA as a counsellor to help new entrepreneurs and existing small businesses.