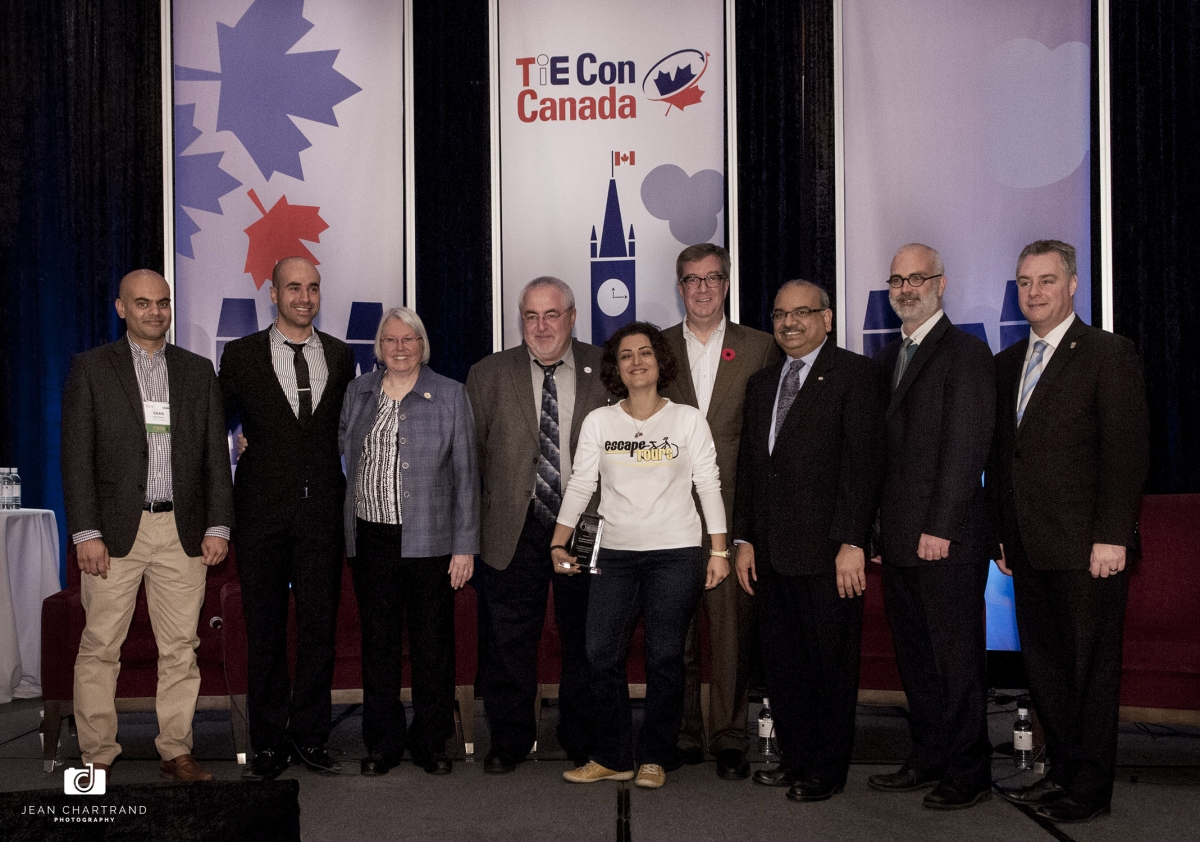 The 2015 Immigrant Entrepreneur Awards were presented to three local business people – Dr. Nishith Goel, Dr. Maria Rasouli and Moe Abbas – whose business success and spirit have contributed to the local economy and serve as an inspiration to new Canadians to start their own businesses.

The award ceremony was held at the Brookstreet Hotel on October 30, 2015, as part of the TiE (The Indus Entrepreneurs) Conference breakfast. TiE is an international association that has chapters in cities around the world, including Ottawa, which provide a network to help entrepreneurs connect, share leading practices and mentor new entrepreneurs.

Dr. Goel is the CEO of Cistel Technology, an Information Technology company he founded in 1995 which has operations in Canada and the U.S. A veteran technology executive and entrepreneur, Dr. Goel is also co-founder of CHiL Semiconductor, iPine Networks and Sparq Systems.

After his early education in India, Dr. Goel earned his MASc in Electrical Engineering and PhD in Systems Design Engineering from the University of Waterloo. Dr. Goel began his professional career at Bell Northern Research in Ottawa in 1984 before moving on to Northern Telecom in 1988.

Dr. Goel has served on the Board of Directors of several technology companies including Chil Semiconductor, Sparq Systems, iPine Networks and Enablence. He has also served on the board of directors of the Community Foundation of Ottawa, the Queensway Carleton Hospital Foundation and the Indo-Canada Ottawa Business Chamber. Dr. Goel served as Chair of the Queensway-Carleton Hospital Foundation in 2009-2011, and Chair of ICOBC in 2009-2010.

Dr. Maria Rasouli is an immigrant from Iran with a PhD in Organizational Psychology from Carleton University. After working as a university lecturer and consultant for several years, she decided to pursue her passion for cycling and outdoors by founding Escape Bicycle Tours.

Escape Bicycle Tours leverages on Ottawa’s world class cycling infrastructure and promotes an environmentally friendly and a physically healthy way of travelling and sightseeing. Within only one season it has been rated on TripAdvisor by its guests as one of the top 2 out of 45 tours and activities in Ottawa. This has been accomplished by offering cycling as a healthy and active alternative for tourism in Ottawa, instead of taking bus tours or driving to the major attractions. Escape has contributed to Ottawa's start-up culture by putting Ottawa on the map and creating for travellers', a bicycle friendly community and destination where everyone (families, retirees) can safely cycle and truly see Ottawa at its best.

She pursues and advocates active lifestyle by carefully planning and executing cycling trips as means of recreation, tourism and sightseeing. Maria has been an advocate for diversity in her consulting career and now in her business by encouraging newcomers to integrating recreation especially cycling in their life in Ottawa.

Maria has mentored over 150 professional newcomers to Ottawa in the last 6 years for their career development and establishment in Canada either as a volunteer or employee (Program Manager, Trainer, Researcher, Consultant) at several organizations serving the Ottawa immigrant community.

Maria Rasouli has volunteered with Recycle and is a Board Member of Capital Velo Fest.

At 19 Moe founded his first two companies. Since then he has founded or co-founded over a dozen local startups which over the last 10 years have employed thousands of local residents.

In 2007 Moe founded Ottawa General Contractors (OGC). OGC has generated over 30 million dollars of economic benefit to the Ottawa economy. Over 100 trades, suppliers and employees are able to provide for their families from OGC. All labour and materials are sourced locally. OGC creates an economic benefit to its clients who have the additional value of their home improvements in equity.

Moe's current start-up, Bumpn Inc., is a location based social media app. It is the first consumer facing social media application to come from Ottawa. Over 14 people are employed in Bumpn and the team has created over a dozen patents. Bumpn is part of Invest Ottawa. The team holds weekly startup meetings for young entrepreneurs at their local office where they fire up the BBQ, drink beer and share entrepreneurship advice. Bumpn brings the silicon valley startup scene culture to Ottawa with its innovative work environment, and product offering.

Moe has been in the Ottawa community since he was a young child. He has hired and mentored immigrants, youth, and women. He has adopted multicultural work environments where over 75% of the staff are immigrants, youth and or women. Opportunity for those that are hungry, smart and fast has been the mantra that he shares with the Ottawa community. As a 29 year old Moe has not only initiated catalytic change in the Ottawa Community but is able to continue pushing change forward as an ideal role model for young immigrants.