2020 has been a year unlike any we have experienced. In cities across Canada, the COVID-19 pandemic has taken a financial toll on residents, businesses and local government. Municipal services are critical in the pandemic response, reinforcing how greatly residents rely on the City. Ottawa has a proven record of sound financial management, but COVID-19 has led to revenue losses and unplanned costs, resulting in a forecasted year-end deficit.

The first phase of the Ontario Safe Restart Agreement delivered $124 million in federal and provincial funding to our COVID-19 response efforts and has helped close the 2020 budget gap. These funds are helping us protect and deliver the many municipal services residents depend on.

Draft Budget 2021 is a no-frills budget that strikes a balance between supporting evolving community needs during this pandemic and delivering essential municipal services, while also advancing Council’s priorities. This is integral, both to our community’s recovery and to Ottawa’s future prosperity.

Many residents in our community face continued financial hardship; it’s more important than ever that Ottawa stay affordable to keep us on solid financial ground. Draft Budget 2021 maintains services that meet the community’s evolving needs, while limiting the property-tax increase and delivering on Council’s promise to keep increases at three per cent.

The year ahead still poses challenges and contains many unknowns, but decades of careful financial stewardship have made Ottawa resilient. With the continued commitment from our federal and provincial partners, we are on solid footing as we work towards a vibrant future and continue to meet the challenges of the changing world in which we live. The Draft Budget 2021 has been cautiously developed while we await further information on additional municipal funding from the federal and provincial governments in the coming months.Page Break

The health and safety of residents is our top priority. A healthy and resilient community is the foundation we need to facilitate social and economic recovery and to keep the momentum going. Delivering essential City services is integral to our residents’ well-being – be that key social services, long-term care, public health response or recreation programs for your family’s physical and mental health.

The hallmark of any prosperous and vibrant city is its ability to provide every resident with the same opportunity to achieve self-sustainability and to contribute to the community. Many residents cannot afford a place to call home – especially youth, older adults on fixed income and those earning minimum wage. The pandemic compounds problems with housing affordability as more people experience furloughs, lower income and job losses.

Infrastructure investment is a key element needed to support Ottawa’s economy during this pandemic, along our road to recovery and into the future. It will lead to more development, attracting new investments and businesses, which will generate employment, which in turn supports our local retail and service industries. Stage 2 of our expanding LRT system is one of many major infrastructure projects that will help keep our economy and the future job market moving forward.

Funding to maintain and renew assets such as roads, sidewalks and City facilities will increase by $25 million this year – bringing us to $171 million invested in 2021. It will also reduce the infrastructure gap – the difference between what the City spends and what it needs to spend annually to maintain infrastructure in good repair – by $6 million in 2021 to just under $43 million, compared to the $70 million gap in 2017. 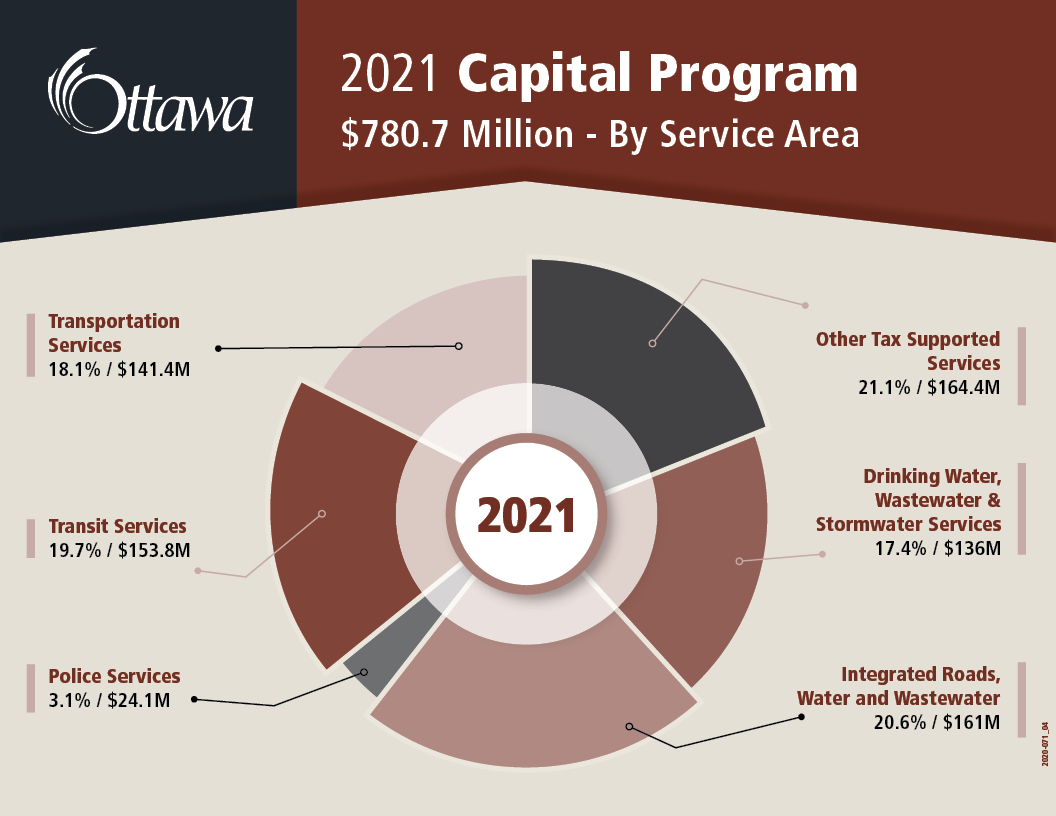 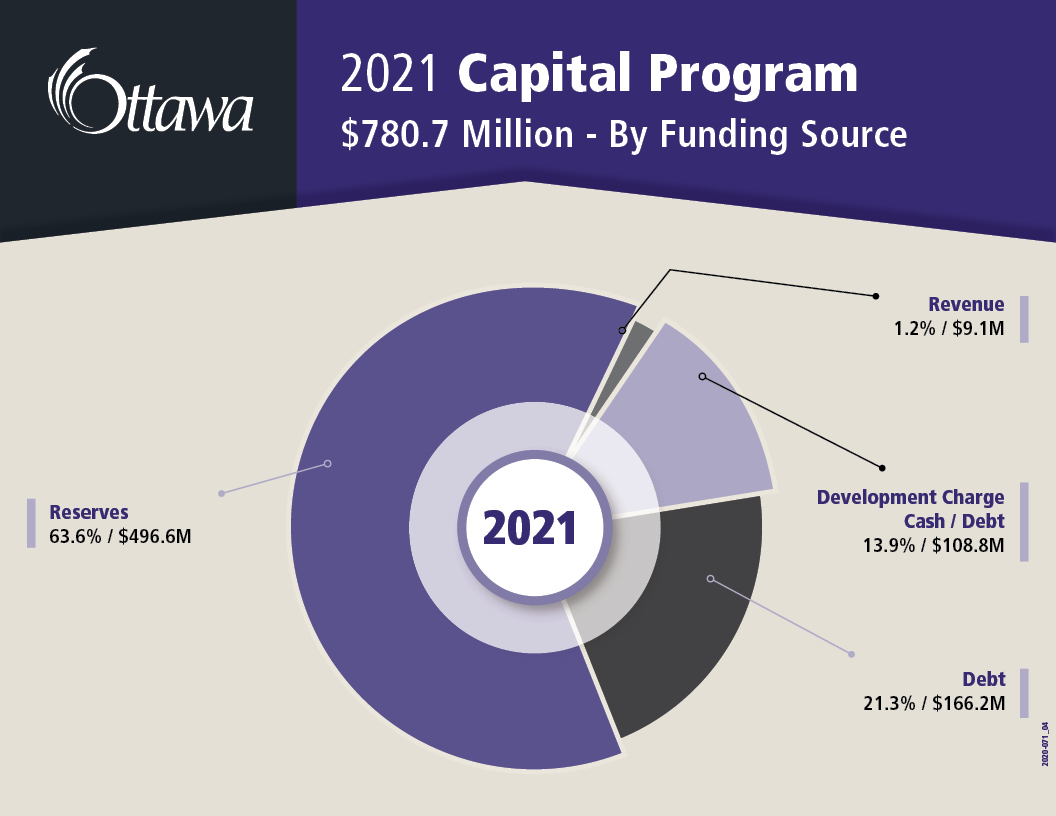 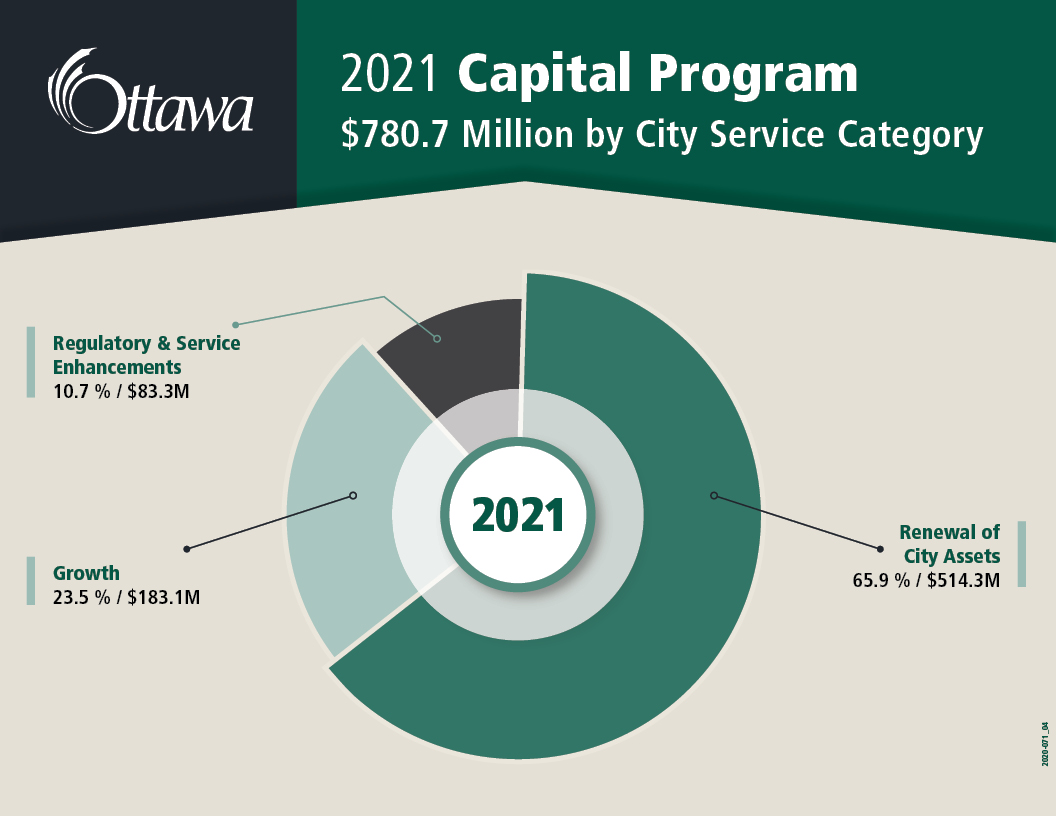 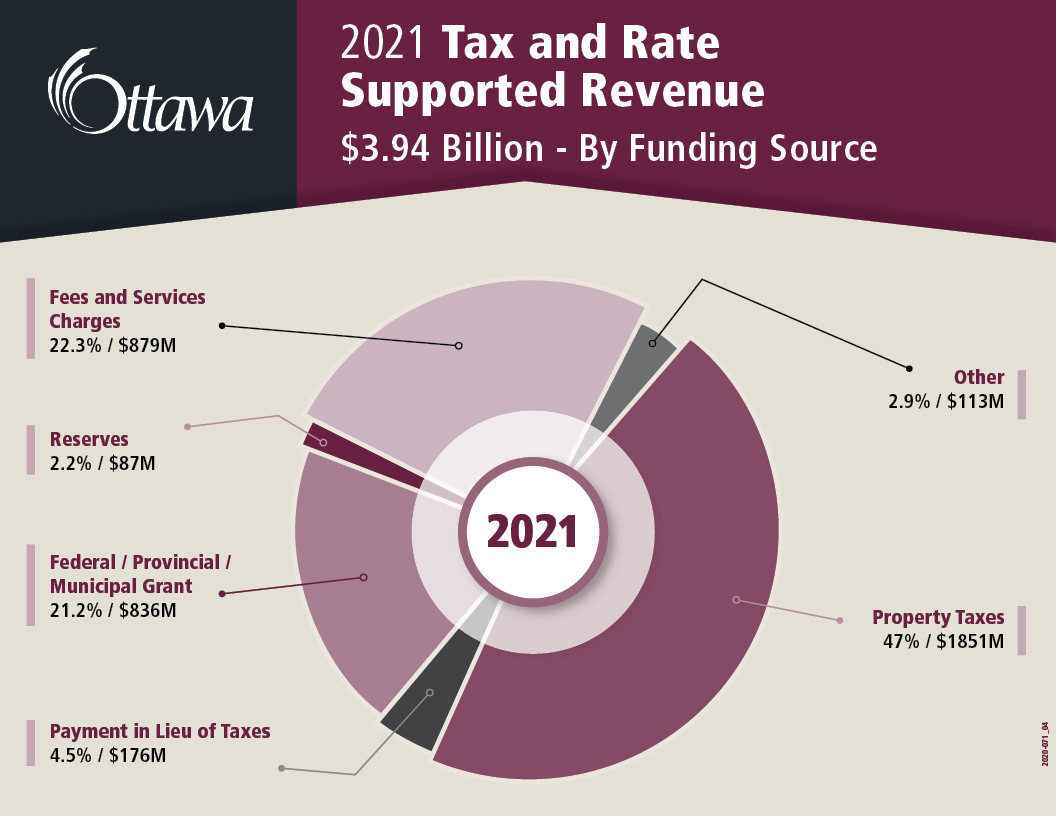 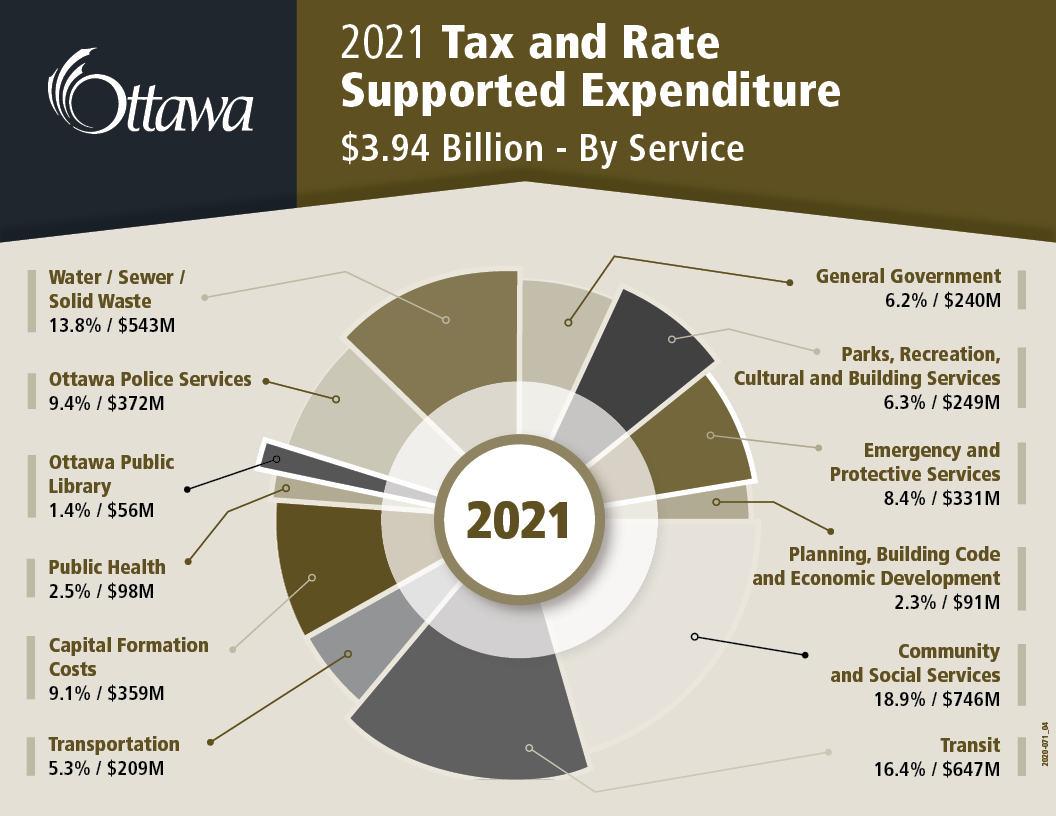 Focus on LRT and infrastructure

Stage 2 of Ottawa’s LRT system continues to be the centerpiece of the City’s infrastructure investment, enhancing our community’s mobility and giving the City an asset that will encourage future development and investment. Stage 2 continues moving forward, with funding to prepare for expanded service east by 12 kilometres and five stations, west by 15 kilometres and 11 stations, and south by 12 kilometres and eight stations – including a link to the Ottawa International Airport.

The LRT system is the biggest infrastructure project in Ottawa’s history and, once Stage 2 is completed, it will feature 24 new stations along 44 kilometres of rail. Stage 2 will bring 77 per cent of Ottawa’s residents within five kilometres of the nearest LRT station. It will transform commuting in Ottawa by connecting communities and relieving congestion. The $4.6-billion project is jointly funded by the Government of Canada, the Province of Ontario and the City of Ottawa.

Draft Budget 2021 includes a $6 million commitment for expanded rail service on Lines 1 and 2, and $6.2 million to support expanded service as part of Stage 2. The budget invests nearly $24 million to purchase and install fare-control equipment for all three extensions and to update existing equipment for Open Payments.

Draft Budget 2021 invests in Line 1 upgrades too, notably $13 million to improve Blair and Tunney’s Pasture stations by adding information panels and canopies on outdoor platforms, and replacing and adding an elevator at Blair Station.

Additional infrastructure investments include $45 million to resurface roads, up from the yearly average of $35.5 million in the last Term of Council, and $28 million on integrated roadway projects to save costs by coordinating needed sewer and road work. Rural areas will benefit from $40 million in infrastructure, an investment on par with the four-year average of $39.7 million. And cyclists and pedestrians will see $12.6 million invested to improve active transportation facilities through pedestrian and cycling programs.

Given the health and economic impacts of the ongoing pandemic, support for housing is needed more than ever. The pandemic has highlighted the inequities facing our most at-risk residents who do not have a home to stay in and keep safe. This will be the third budget in a row that has committed a record-setting investment to increase Ottawa’s stock of affordable housing.

Draft Budget 2021 commits another $15 million capital investment to encourage the development of more affordable and supportive housing for those most in need, matching the funding delivered in both the 2019 and 2020 budgets for a three-year total of $45 million. From this year’s investment, $5 million represents an increase to the affordable housing base budget, adding to last year’s $1 million increase and committing those future resources to more multi-year housing projects. It would mean $60 million over ten years and, when added to another $20 million in projected development charge revenues and surplus land sales, could help fund construction of around 2,100 units in the next decade.

In addition, Ottawa has secured a $32 million investment from the Government of Canada’s Rapid Housing Initiative to help the City create affordable housing units quickly, through acquisition, conversion and modular construction. Taken together, that is a record-setting $47 million capital investment in affordable housing in Ottawa.

Based on past practice, we can anticipate that the City’s contribution of $15 million will leverage at least the equivalent amount of new federal and provincial investment. This is expected to result in the creation of up to 250 new supportive and affordable housing units. At present, 644 new affordable housing units are in development, and recently, in July 2020, approval was provided to begin development for another 608 affordable units.

This capital investment will also complement the $33 million that the Draft Budget 2021 commits to investing in community-based housing and homelessness programs and supports.

Council declared a climate emergency in 2019 and the City has made the environment a priority, committing $2.6 million for projects to help meet ambitious targets for reducing greenhouse gas emissions (GHG) in Ottawa. Our goal is to reduce emissions by 100 per cent by 2040 within the corporation of the City of Ottawa, and Ottawa-wide by 2050. In addition to mitigating the effects of climate change, this shift to low-carbon energy sources will grow the local economy and improve public health.

The City is set to spend the surplus from last year’s Hydro Ottawa dividend on our Energy Evolution strategy to reduce GHG through a series of 20 projects. Working in partnership with the community, these projects will focus on the most impactful ways to reduce emissions: electrifying personal and commercial vehicles, retrofitting residential and commercial buildings, and studying options to turn organic waste into renewable natural gas.

Draft Budget 2021 also includes a $3 million investment this year to enhance and retrofit City facilities across Ottawa. The investment will help reduce energy use and costs, with projected annual savings of $365,000. It is anticipated to generate a net payback in eight years and will be a significant step in reducing GHG in Ottawa, avoiding 680 metric tons of emissions each year.

As part of planned investments, the City will install and expand building automation systems in 75 facilities to optimize energy use and comfort, reducing annual electricity costs and energy use. In 2021, the City will upgrade 12,000 fixtures of older lighting technology to high-efficiency LEDs in 60 facilities and replace another 5,000, reducing electricity use by 30 to 90 per cent and decreasing light pollution. Installing electric boilers at larger facilities for heating will let the City take advantage of lower electricity rates, saving $29,500 per year and reducing emissions by 228,000 kilograms. Other planned energy-saving upgrades include replacing air handling units, installing variable-speed drives on motors, switching to energy-efficient windows and adding equipment to reuse heat and reduce heating costs.

A new 2021 pilot project will allow the City to use drones to assess facility construction. The drones will monitor heat loss, leading to energy savings and proactively identifying building structural and energy defects while construction is ongoing.

City staff will present an annual breakdown to Council of the costs of more than 1,400 City electricity accounts, including all energy savings and electricity usage.

The City will invest in planting 125,000 trees next year, making progress on the Ottawa River Action Plan, building Stage 2 of LRT, rolling out the electric bus pilot and investing in pedestrian and cycling plans, all of which will help reduce greenhouse gas emissions and help the City reach its goals.