Minister of the Environment and Climate Change decision [ PDF 1 MB ]

The United Counties of Prescott and Russell in partnership with the City of Ottawa have completed the Class Environmental Assessment (EA) Study for improvements to Ottawa Road 174 from the Highway 417 Interchange to Canaan Road and improvements to Prescott-Russell County Road 17 from Canaan Road to Landry Road (County Road 8). 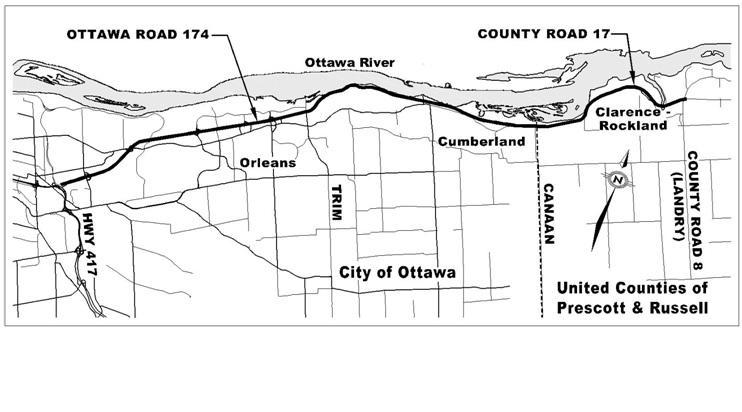 This Study was planned under Schedule C project under the Municipal Class Environmental Assessment. The Recommended Plan includes:

The Environmental Study Report (ESR) has been prepared to document the planning and design process and the functional design of the recommended plan. The ESR is available for public review at the following locations during regular business hours for a period of 30 calendar days, starting on Thursday June 2, 2016.

During the public review period, interested persons are encouraged to read the ESR and provide comments to one or both of the co-proponents by July 4, 2016. Please direct written comments to:

If you have discussed your issues with one or both of the co-proponents and you object to the project, you may request that the Minister of the Environment and Climate Change order a change in the project status and require a higher level of assessment under an individual Environmental Assessment process (referred to as a Part II Order). Reasons must be provided for the request. Copies of the request must be sent to:

Direct submissions to the Ministry of the Environment and Climate Change are subject to the Freedom of Information and Protection of Privacy Act and the Environmental Assessment Act. Unless otherwise stated in the submission, any personal information such as name, address, telephone number and property location included in a submission will become part of the public record for this matter and will be released, if requested, to any person.