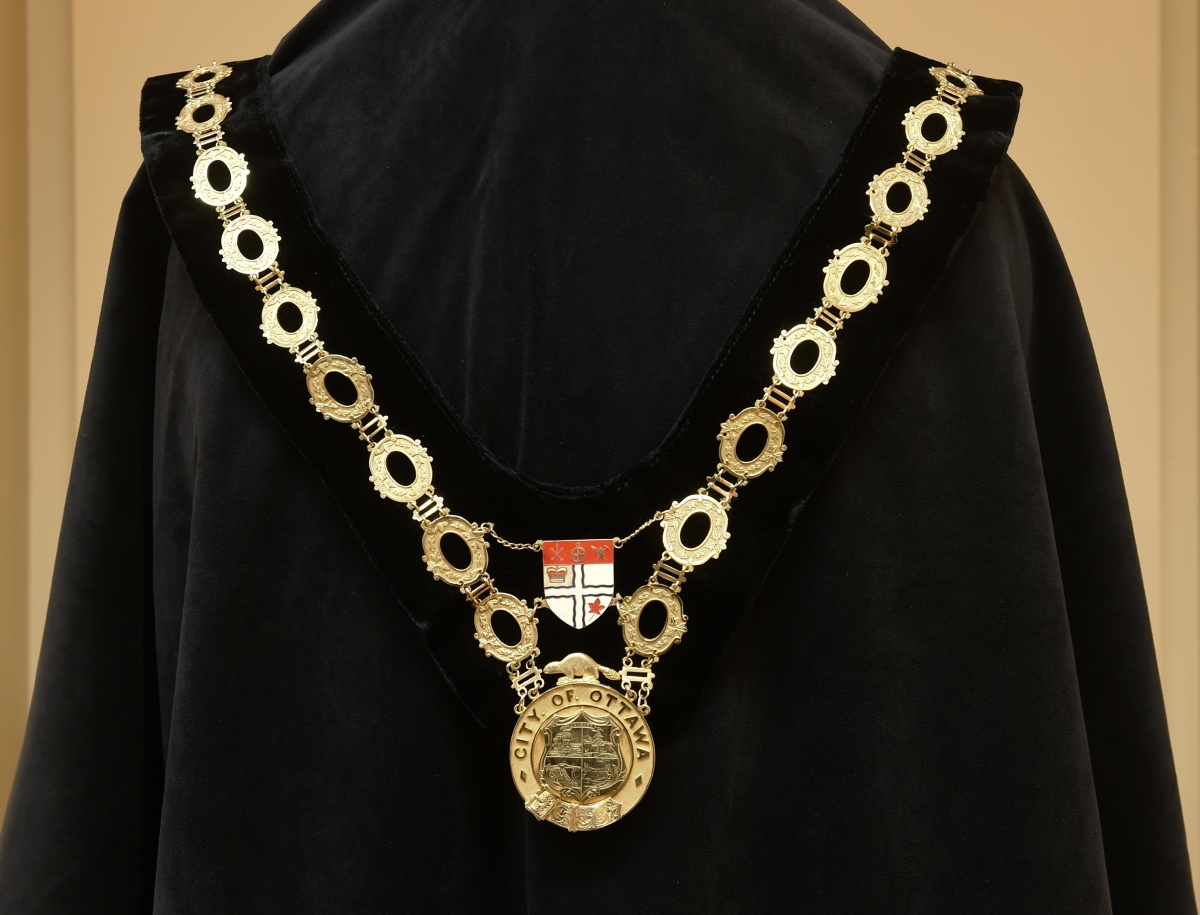 A Mayor’s Chain of Office for the original City of Ottawa was first considered in 1872. A special committee decided that it was “in every way fitting the Chief Magistrate of the Metropolis should, while presiding over the deliberations of the Council, and on all great public occasions, appear in the garb and wearing the insignia generally assigned to the office in all large and well regulated communities”.

The gold link chain was remodelled in 1956 to accommodate Ottawa’s new official Coat of Arms, a 10 carat gold shield suspended above the circular pendant medallion.

The Chain of Office has been worn by the Mayor since the expansion of the City of Ottawa resulting from the amalgamation of 2001. Chains of Office from the former Township of Goulbourn, City of Nepean, Township of Osgoode, Township of Rideau and City of Vanier are on display at Ottawa City Hall.

Once used by the City of Ottawa’s Mayors in their daily business, this antique writing table has since been identified as part of the City’s heritage and is favoured by the Mayor for ceremonial signings with visiting and local dignitaries. Its last known continual use was during the 1950s by Mayor Charlotte Whitton, who was instrumental in reviving ceremonial practises and symbols for the City’s municipal government, such as the Mayor’s ceremonial robes and mace. It is thus particularly fitting that her desk should now be used for ceremonial signings. The desk is commonly paired with the Mayor’s Chair in oak and dark red leather during such events. 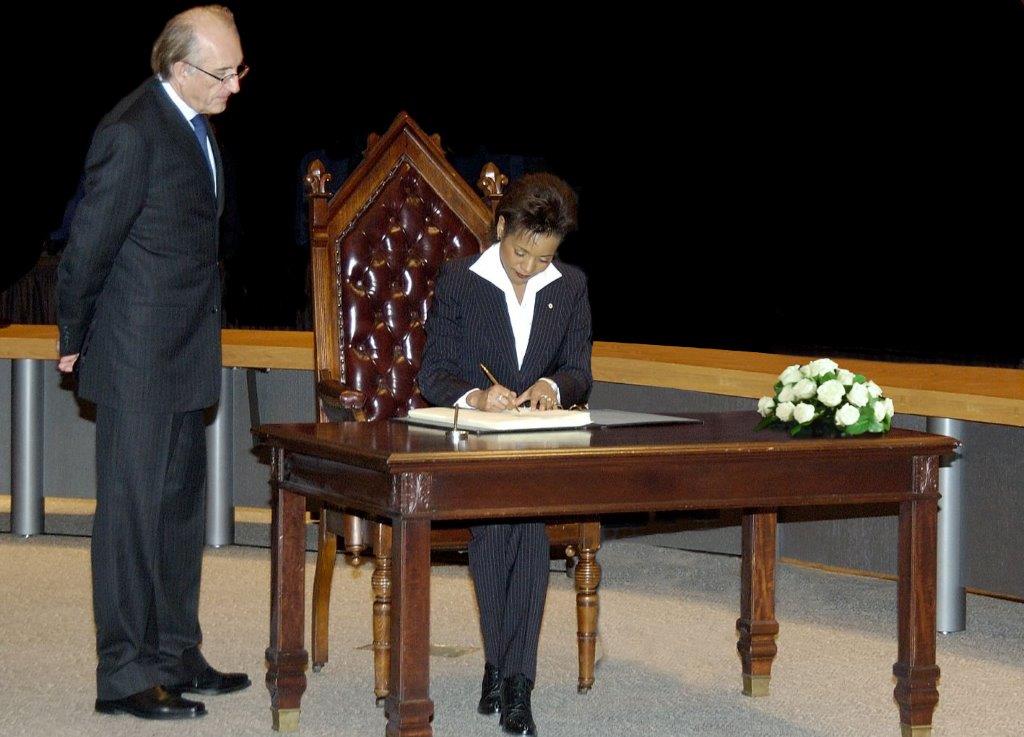 The Mayor’s Ceremonial Desk dates from the early twentieth century and is built of mahogany and mahogany veneer in the Neoclassical style, with carved acanthus leaf detailing, and brass handles and leg sockets. Its three drawers are built with dove-tail construction. There are no makers’ marks present to confirm its manufacturer.

The Mayor’s Ceremonial Chair is part of the City of Ottawa’s unique collection of antiques that has been passed down from previous governments to become part of our collective material heritage. The Mayor’s Chair dates from the early twentieth-century, and was likely once used in City Council. It is now preserved for ceremonial purposes. The chair is often paired with the Mayor’s Ceremonial Desk, a mahogany and brass writing table from the same period, for signings and other significant events.

The Ceremonial Chair is made of solid oak in the neo-gothic style, with a triangular-peaked back and carved fleur-de-lys finials. The armrest supports and front legs have been turned on a lathe, and the chair is upholstered in rich dark red leather with a tufted (stuffed) chair back. The back is stuffed with organic matter, such as hay or animal hair. There are no makers’ marks present to confirm the manufacturer.

Robes of Office have been worn by the Mayor of the City of Ottawa since at least the 1870s, when it was noted in a Special Report (1872) to City Council that the Mayor should "when presiding over the deliberations of the Council, and on all great public occasions, appear in the garb and wearing the insignia generally assigned to the office in all large and well regulated communities".
This practise followed in the tradition common in English cities to provide formal, ceremonial clothing to its municipal governors to wear during significant events.

Although the practise fell out of favour in the early twentieth-century, it was revived by City of Ottawa Mayor Charlotte Whitton (1896-1975) in the 1950s, along with other regalia and symbols of office. With the Coronation of Queen Elizabeth II in London, England imminent, along with the centenary of the founding of Ottawa, Mayor Whitton purchased this robe from prominent English robe makers Ede and Ravenscroft. Its official use, along with the provision of Robes of Office for members of Council, was enacted in 1954 and it is still worn today at the inauguration of new City Council and other ceremonial events.

The Mayor's Robe of Office is a calf-length robe made of red silk trimmed with “choice mushquash” or muskrat fur on the lapels, with black velvet accents on the sleeves and bottom of the robe. It is traditionally worn with a lace jabot (ruffle) and tri-corn hat, along with the Chain of Office.

A coat of arms is a heraldic symbol dating back to the 12th century in Europe. It was originally a cloth tunic worn over, or in place of, armour to establish identity in battle. Arms were later adopted as emblems for cities, schools, churches, guilds and corporations to reflect their origins or histories.

History of our Coat of Arms

The City of Ottawa’s Coat of Arms was granted by the letters Patent of the King of Arms, the Duke of Norfolk, on September 15, 1954 and was formally used on January 1, 1955. At amalgamation in 2001 the Transition Board elected to continue the use of the former City of Ottawa's Coat of Arms and it continues to be used today.

The Armorial Bearings of the City of Ottawa as provided by the Canadian Heraldic Authority:

Arms: The wavy blue and white cross represents the junction of the Ottawa River and the two tributaries, the Rideau and Gatineau rivers, which determined the location of the community. The Royal Crown honours the naming of Ottawa as the Dominion of Canada’s capital by Her Majesty Queen Victoria in 1857. The maple leaf is another reference to Ottawa as the capital of Canada. The canoe paddle and arrows symbolize the Outaouais Nation, who were the first occupants of the region. The astrolabe represents Samuel de Champlain, the first European to explore the region in 1613. The pick and shovel crossed behind a grenade allude to the Royal Engineers who, under Lieutenant-Colonel John By, built the Rideau Canal and founded Bytown, the original name of Ottawa.

Crest: The white pine honours the role this natural resource played in attracting settlers into the Ottawa region and is also a reference to what was considered one of the Ottawa Valley’s principal economic assets. The roundel featuring an oak tree alludes to the former seal of Bytown.

Motto: The phrase is adopted from the city’s original motto, “City of Ottawa Advance”.

Supporters: The timber trimmer refers to Ottawa’s historic timber trade industry. The officer of the Civil Service Rifle Regiment indicates that this unit and its successors, composed of volunteers from the civil service, have served in Ottawa since 1865.

Original Concept of: The Heralds of the College of Arms, London. 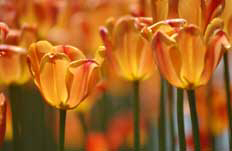 The tulip was declared the official flower of the City of Ottawa on October 24, 2001.

The history of our flower

During the Second World War, the Dutch Royal family was hosted at Stornoway - now the official residence of the Leader of the Opposition in the House of Commons.  Princess Margriet, daughter of the late Queen Juliana of the Netherlands, was born at the Ottawa Civic Hospital on January 19, 1943. Concerns that Princess Margriet might be considered a Canadian citizen and not a Dutch citizen lead the Government of Canada to temporarily declare the Ottawa Civic Hospital extraterritorial thereby ensuing Princess Margriet would hold exclusively Dutch nationality.

In the fall of 1945, then Princess Juliana presented the people of Canada with a number of gifts including 100,000 tulip bulbs. The gift was given to thank Canada for the safe haven giving to her family and to acknowledge the important role of Canadian troops in liberating the Netherlands. Queen Juliana continued to send a gift of thousands of tulip bulbs to Canada during her reign, a tradition that continues with her daughter Queen Beatrix and her grandson King Willem-Alexander.

The first Canadian Tulip festival was held in 1953. The Ottawa Board of Trade, with help from world renowned Canadian photographer Malak Karsh, whose photographs celebrate the tulips, formalized the festival to coincide with their annual bloom.

History of our flag

The development of a new visual identity was led by a group of citizens who consulted with over 1000 Ottawa residents. According to the participants, these characteristics were key:

The flag also needed to represent a modern, dynamic, attractive city and an exciting place in which to live.

The elements of our flag

Each element represents a characteristic that is unique to our community:

The colours of our flag 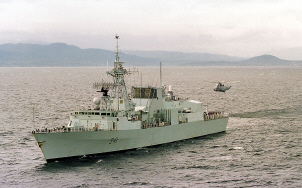 The City of Ottawa has an ongoing relationship with the crew of Her Majesty's Canadian Ship (HMCS) Ottawa.

The Key to the City was presented to the Commanding Officer of HMCS Ottawa on Tuesday, May 29, 2007 by His Worship Larry O’Brien on behalf of City Council and the citizens of Ottawa in recognition of over 70 years of selfless dedication and service to Canada.

The current HMCS Ottawa is the fourth ship in the Canadian Navy to carry the name Ottawa. She was launched on May 31, 1996 and accepted by the Navy on July 31, 1996. Commissioned in Cornwall, Ontario on September 28, 1996, HMCS Ottawa has a mixed gender crew of 250 personnel, and is the fifth and last Halifax-class frigate to join Canada's Pacific Fleet. HMCS Ottawa is based in Esquimalt, British Columbia on the west coast of Canada.

Find out more about the HMCS Ottawa.

The City of Ottawa’s official motto is “Advance-Ottawa-En Avant”.

The motto "Advance " originates from ancient battle cries to distinguish friend from foe.

Mottos are not usually bilingual, but was chosen to reflect the bilingual provisions of the British North America Act under which Ottawa remained the capital of the Dominion.

The original records which established both the former "device of arms" used between 1855 and 1954 and the motto "Advance" were destroyed in the famous Ottawa City Hall fire on March 31,1931. The new bilingual motto was first used with the new Arms of the City of Ottawa by Letters Patent of Grant (also called a "grant of arms") on January 1, 1955.

Two Ottawa military regiments have been honoured by the City of Ottawa and granted permission to use elements of the City's arms. The Governor General's Foot Guards No. 3 Company badge bears a plate of the armorial bearings of the City of Ottawa (July 1st, 1972). The Cameron Highlanders of Ottawa's motto is "Advance" in accordance with General Order - 82 dated on January 13, 1882.

The Cameron Highlanders of Ottawa (Duke of Edinburgh’s Own) regiment traces its history back to 1861 when a number of Militia companies were organized for the defence of Canada during the American Civil War. In 1856 nine independent infantry companies were united to form the 43rd Carleton Battalion of Infantry.  One of these companies was mobilized during the first Fenian Raid (Irish nationalists) into Canada from the United States in 1866.

During the Second World War, the Cameron Highlanders served on garrison duty in Iceland, trained in the United Kingdom and landed in Normandy on D-Day, June 6, 1944 – the only Ottawa unit to do so. As part of the 3rd Canadian Infantry Division, the Camerons fought their way through France, Holland and into Germany in 1944 and 1945.

In July 1967, Her Majesty Queen Elizabeth II presented new colours to the Regiment in Ottawa and in 1969, the Camerons were awarded the Freedom of the City of Ottawa.

During the past 50 years, the Camerons have continued to train and carry out various operational functions to support domestic operations and to fulfill ceremonial duties such as the Rose Bowl Parade in 1976, the Queen’s Silver Jubilee in 1977, and the 50th Anniversary of Dieppe in 1992.

Located at the Cartier Drill Hall, the Cameron Highlanders of Ottawa are part of the Canadian Forces Primary Reserves and continue to be involved in peacekeeping and domestic Canadian Forces operations. They were formally reconfirmed and reinstated as Ottawa’s Official Regiment following amalgamation by a motion of Ottawa City Council on February 14, 2001.