Thousands of species of plants rely on animals to help them reproduce, by carrying pollen from one flower to another. These animals are known as pollinators, and they are vitally important to natural ecosystems and our agri-food system. We rely on pollinators to produce many essential food crops, as well as favourite luxury items such as coffee and chocolate.

Learn more about how to attract and support pollinators, and what the City is doing.

Pollinators provide essential services to farmers, gardeners, and natural ecosystems. Globally, over 75 per cent of food crops depend on pollination by animals. Locally, our pollinators include hundreds of species of native bees, flies, butterflies and moths, beetles, ants and even some birds, as well as the introduced European honeybee. Many people think of honeybees as the most important pollinators, but native pollinators are very effective and actually provide better quality pollination for some crops. They don’t give us honey as a by-product, however.

News stories about losses of honeybee colonies have prompted concerns among people who want to help save the bees. However, honeybees and other commercially produced species are not at risk of extinction. Wild pollinators are, including the iconic Monarch butterfly and several species of bumblebees. The best ways to save the bees (and other pollinators) are to provide good quality habitat, avoid or reduce pesticide use, and learn more about these fascinating creatures!

Residents who are interested in beekeeping because they want to save the bees or reconnect with nature, should instead consider supporting native bees and other pollinators. This is especially true in urban and suburban neighbourhoods, for the following reasons.

The provincial Bees Act prohibits the placing or keeping of beehives within specific distances of residential properties, public parks or other places of public assembly or recreation, community centres, and roads. The cumulative effect of the Bees Act is essentially to prohibit beekeeping in most urban or suburban contexts.

There are also environmental concerns with urban beekeeping. Research suggests that domestic honeybees compete with native bees and other pollinators, and may also transmit diseases or pests. In urban settings, where suitable pollen and nectar sources are limited, the negative impacts of honeybees on native pollinators may be particularly severe.

The City of Ottawa recognises the value of pollinators and supports them through many existing policies, programs and practices. Examples include:

Bee hotels and insect houses provide native bees and other insects with places to lay their eggs, just like birdhouses do for birds. They are not beehives, which are intended for use by colonies of domestic honeybees. The types of native bees that use bee hotels do not produce honey, but they do provide valuable pollination services to our gardens, farms and natural areas. Bee hotels, unlike beehives, are permitted throughout Ottawa’s urban area.

Several bee hotels or insect houses are available commercially, but some of them are not well designed for long-term use by our native pollinators. You can make your own using readily available materials at home. Important design features include:

In June 2019, the City of Ottawa established a small pollinator garden in one of its ornamental flower beds at City Hall. The garden features several species of native perennial wildflowers known to be attractive to pollinators, and a bee hotel for native bees. Wooden stepping stones were included to permit staff and partners to conduct periodic surveys of the garden. The City Hall pollinator garden was officially opened by Mayor Watson on June 7, Ottawa’s first annual Pollinator Appreciation Day.

Over the following months, the garden flourished. The blazing star, butterfly milkweed and pearly everlasting bloomed first, attracting many eager pollinators to the garden. Later in the season, the New England aster and rough goldenrod provided beautiful fall colour as well as nectar. The lance-leaved coreopsis, wild bergamot, prairie smoke and common milkweed did not bloom in 2019, but they appeared to establish themselves well and are expected to bloom in 2020.

The bee hotel saw brisk business from several different species of bees, and a couple of wasps too. Bee hotels provide nesting sites for native species such as masked bees and mason bees. They are not bee hives, which are used to house colonies of non-native honeybees. Most of our native bees live solitary lives, and do not produce honey. Our bee hotel has been taken down for the winter, and will be returned in the spring full of fresh nesting material for next year’s guests.

In total, over 40 different species of wildlife were observed using the pollinator garden in its first year. This includes at least 14 species of bees, 10 species of wasps, eight species of pollinating flies, and two butterflies. One of the more notable sightings was a female Monarch butterfly, who stopped by the garden in late July to lay her eggs on the common milkweed. Residents are encouraged to report any sightings of wildlife in the garden (or elsewhere in the City) using the iNaturalist app. 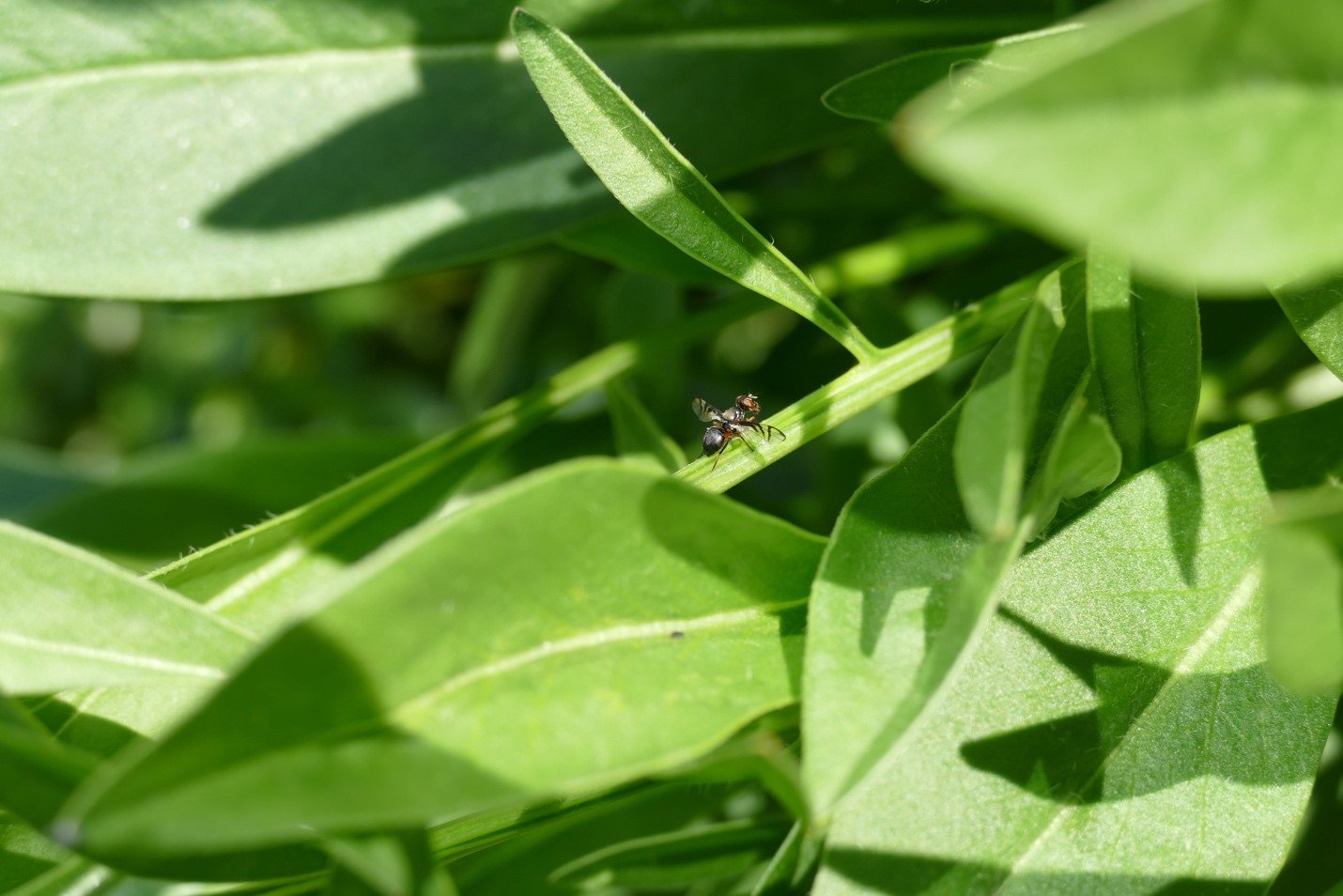 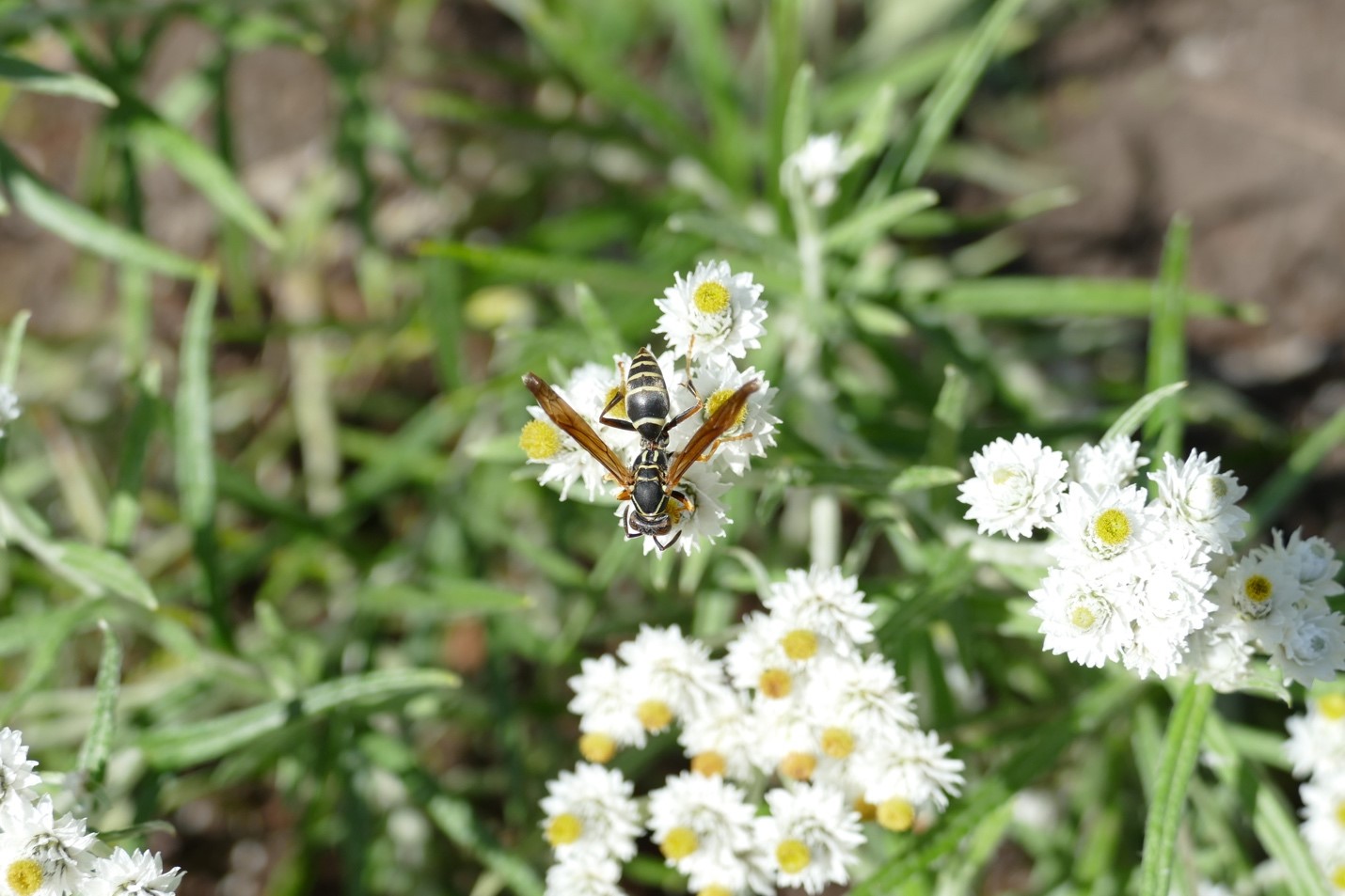