Notice of Completion is August 26, 2011. The Environmental Project Report is now available for 30 days for public and agency review, comment and/or objection (as per the process specified in Ontario Regulation 231/08).

Whether there is an objection or not, the Ontario Minister of the Environment will have 35 days after the public review period to provide one of the following:

Only issues around matters of provincial importance that relate to the natural environment or cultural heritage resources or constitutionally protected Aboriginal or treaty rights are grounds for objection to the project.

An interim Transit Project Assessment Process guide is available at ebr.gov.on.ca (EBR # 010-3784), and the Ontario Regulation 231/08 can be found at e-laws.gov.on.ca

Members of the Project Team are available to discuss the project with you and to answer any questions that you may have.

Purpose of the Open House

Welcome to the first of three (3) Public Open Houses planned by the City of Ottawa for the Hospital Link / Cumberland Transitway Connection Study as part of an initial planning phase leading to an Environmental Assessment (EA) Study later this year.

The purpose of this Public Open House is to:

The proposed transit links are identified as future projects within the City of Ottawa’s 2008 Transportation Master Plan (TMP). The section of the Cumberland Transitway from Blair Station easterly to Navan Road is listed as a Phase I priority; the Hospital Link from the Southeast Transitway to Blair Road (at Innes) is listed as a Phase II priority.

The EA study will complete the planning component for the above corridors - the locations for which are ‘undefined’.

An Ontario Municipal Board (OMB) ruling pertaining to a potential Browning Avenue Transit Corridor requires the completion of the EA Study by the end of 2009, and also that the City’s Official Plan “Future Rapid Transit Corridor – Alignment to be Defined” designation shall not apply to lands within the boundary of the hospital complex Ring Road.

This project will follow the new Transit Projects Regulations (Ontario Regulation 231/08) under the provincial Environmental Assessment Act. This process is similar to the Municipal Class EA Process in that an assessment of potential effects, mitigation measures, documentation, and public consultation are required.

Differences to the EA process under the new Ontario Regulation 231/08 are:

For more information, an interim Transit Project Assessment Process guide (EBR # 010-3784) is available and the Ontario Regulation 231/08 can be found. Both can also be found on our resource table.

A federal EA (Screening) under the Canadian Environmental Assessment Act will also be undertaken.

The City’s Transportation Master Plan (TMP) was approved on November 28, 2008. Ongoing public input from Ottawa residents was a significant factor in the final shape of the TMP.

The City’s Official Plan objectives include “a substantial increase in the use of public transit and reduced dependence upon automobile use during peak hours” (Section 2.3.1, OP, 2003).

To provide a high quality transportation system, the City’s goal is to increase transit’s share in the morning peak hour from 23% in 2005 to 30% by 2031.

The 2008 TMP’s transit strategy to accomplish this target emphasizes:

Rapid Transit Network Corridors are critical to achieve the City’s transit objectives. Rapid Transit increases the ease of mobility and attractiveness of transit use for residents.

The three (3) key components of the City’s Rapid Transit Network are:

Transit Intensive Corridors – linking to the primary network, have all-day, dedicated, continuous and exclusive transit facilities for use by buses/trains, operating at grade with priority at signalized intersections

The Hospital Link and Cumberland Transitway Connection corridors are proposed as Primary Rapid Transit corridors in the 2008 TMP.

Stations are meeting points for transfers between all modes of travel.

They must be convenient, comfortable and as secure as possible. They must be accessible for all, and give opportunities for convenience retail and services.

New Transit Station locations will be identified through this study.

Transfer facilities must have features such as taxi loading, drop-off/pick-up facilities, and pedestrian walkways

The Potential Transit Corridors should:

Along with the current land uses, future developments will generate a significant amount of new travel activity.

The Need for Transit – Projected Population and Employment Growth

Due to the projected city-wide population and employment growth between 2005 and 2031, peak hour transit person transit trips will increase by 76%, while automobile person trips will only increase by 24%.

Transit will be integrated with cycling through:

Transit will be integrated with multi-use pathways and scenic entry routes through:

Transit will be integrated with the road network through:

The location and design of the selected transit corridor will include mitigation of potential effects on Ottawa’s natural heritage. Core Natural Heritage Features such as Greens Creek will be protected.

Key issues identified to date include:

The following are the Transit Technical Guiding Principles, which are proposed to be used as the fundamental basis for the bounds of the study. They have been developed from the Study Team’s interpretation of the RFP and Council minutes, review of the City’s 2008 Transportation Master Plan (TMP) and, subsequent discussions with City staff.

Potential Alternatives to the Undertaking (considered through the City’s Transportation Master Plan) include:

The 2008 TMP has identified expansion of the Rapid Transit Network as an important part of the solution to address projected future travel demand within the Study Area.

A long list of possible transit corridors has been generated based on their potential to provide bus linkages between the Southeast Transitway, future Cumberland Transitway, Blair Station and provide access to the Hospital Lands.

The evaluation of alternatives is a fundamental requirement of the Environmental Assessment Act. Evaluation factors and criteria may include:

Public involvement is a key component of the EA process.

Key opportunities for members of the public to provide input to the study include:

Ongoing public/stakeholders/agency liaison will be carried out throughout the pre-consultation and formal EA study period. Consultation groups will meet regularly:

First Nations will also be consulted.

The next steps that will be followed in the study include:

Thank you for your participation in this project.

Your comments are appreciated.

In the City of Ottawa’s 2003 Transportation Master Plan (TMP), the City identified a potential transit link in the City’s Rapid Transit Network: the Hospital Link Transit Corridor. The intent of the facility was to improve transit service to the Ottawa Health Sciences Centre and Hospital Lands and support the City’s overall transportation plan for projected future growth. The TMP located this section in the vicinity of Browning Avenue (near the Hospital Lands extending eastward to Blair Road), but the corridor was not defined. The City re-confirmed this potential transit link in the 2008 TMP. The City’s Transit Committee approved the Statement of Work for this study on July 2, 2008. Following the 2008 TMP, the scope was expanded to include not only the Hospital Link Corridor and a connection to Blair Station, but also the section of transit corridor from Blair Road to Navan Road (the western limit of the Cumberland Transitway).

(In 2006, an appeal was filed with the Ontario Municipal Board (OMB), objecting to the proposed transit link using the Browning Corridor The OMB ruled that the City was to confirm/define the location of the transit route by undertaking an Environmental Assessment study to be completed no later than December 31, 2009. As a result of the OMB ruling and deadline, the City launched the pre-consultation and initial planning phase for the above noted EA study in February 2009.

In July 2009, the study determined that the Browning Corridor option would be screened out from further consideration as it was deemed less favourable. As a result, the OMB deadline no longer applied and a decision was made to extend the study’s schedule, with a revised target completion date for the end of 2010.

This recommendation was presented to and received by the City’s Transit Committee on October 21, 2009.

The City of Ottawa has completed an Environmental Project Report in accordance with Ontario Regulation 231/08 for a new 12 km transit facility which will connect the Southeast Transitway, the future Cumberland Transitway, and Blair Station. The transit facility will include a segregated busway between Blair Road Station and Navan Road and bus lanes west of Blair Road to Hurdman Station. 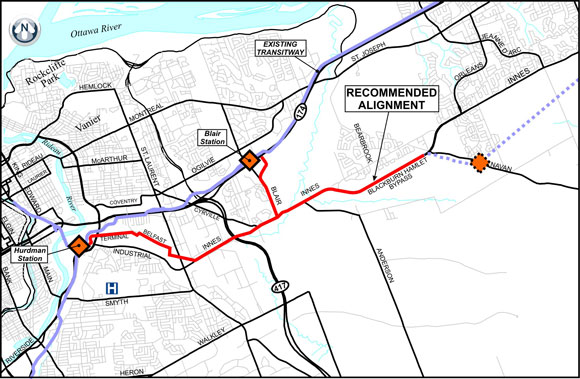 The Environmental Project Report for the Hospital Link and Cumberland Transitway Westerly project is now available for a 30-day public review period starting August 26, 2011 at the following locations:

Locations to view the EPR

Ministry of the Environment

Interested persons are encouraged to review this document and provide written comments by September 26, 2011 to the City’s Project Manager for this project:

There are circumstances where the Minister of the Environment has the authority to require further consideration of the transit project, or impose conditions on it. These include if the Minister is of the opinion that the transit project may have a negative impact on matters of provincial importance (that relate to the natural environment or has cultural heritage value or interest) or a constitutionally protected Aboriginal or treaty right.

Before exercising the authority referred to above, the Minister is required to consider any written objections to the transit project that he or she may receive within 30 days after the Notice of Completion of the Environmental Project Report is first published.

If you have discussed your issues with the proponent and you object to the project, you can provide a written submission to the Minister of the Environment no later than September 26, 2011 to the address provided below. All submissions must clearly indicate that an objection is being submitted and describe any negative impacts to matters of provincial importance (natural/cultural environment) or Aboriginal rights.

If not already provided, a copy of the objection will be forwarded to the proponent by the Ministry.

Under the Freedom of Information and Protection of Privacy Act and the Environmental Assessment Act, unless otherwise stated in the submission, any personal information such as name, address, telephone number and property location included in a submission will become part of the public record files for this matter and will be released, if requested, to any person.