One of the older libraries in the city, the Rideau branch displays a range of artworks from 1945 to 2015. 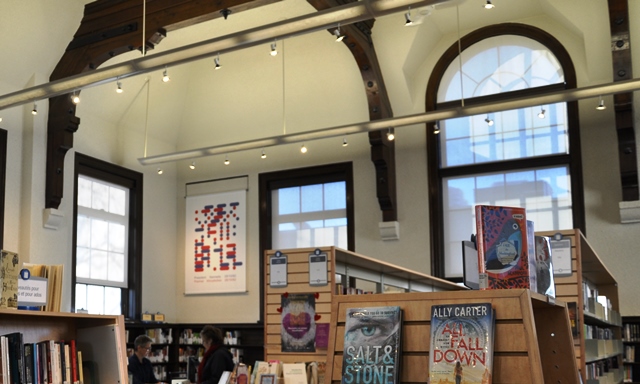 The Correspondence Series is a partial transcription of the correspondence between American President Kennedy and Soviet Premier Khrushchev during the Cuban Missile Crisis of 1962. Words and phrases have been transcribed into Morse Code. The resulting sequence of dots and dashes (red for Khrushchev's words; blue for Kennedy's) indicate something of the secrecy and tensions of the Cold War era. It should be noted that the syntax for Morse Coding has been strictly observed.

This series was originally created for an exhibit in Norfolk, Virginia marking the 40th anniversary of the Cuban Missile Crisis. Originally trained in sculpture, Adrian Göllner has explored nearly every possible medium with his art. He has created artwork for the Embassy of Canada in Moscow and the Embassy of Canada in Berlin. Göllner's art is held in numerous public collections including the Art Gallery of Ontario and the Canadian War Museum. 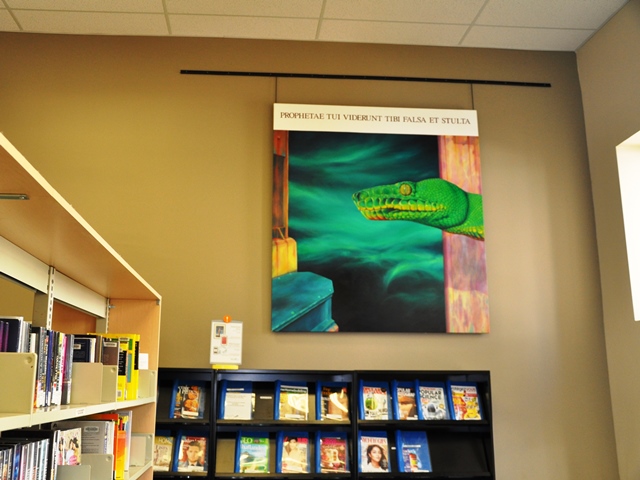 The Emerald Boa, Corallus caninus, is a non-venomous boa species of the Amazonian rain forest that can grow up to six feet in length (1.8 metres). The artist uses the boa as a symbol for Aboriginal cultures of the Americas. A biblical quotation in Latin is displayed above the boa: Prophetae Tui Videerunt Tibi Falsa et Stulta (Your own prophets have envisioned for you worthless and unsatisfying things). José Mansilla-Miranda is an established Ottawa-based artist who has exhibited his work extensively in North and South America as well as Europe. He is a Chilean-Canadian artist whose art reflects his cultural heritage. He applies political and religious symbols to compare the institutions of different cultures.

In the 1980s, Evergon worked extensively with Polaroid imagery. His oeuvre includes works ranging in size from small prints to large collages over 7 feet (213 cm) wide, such as this work, The Ghent Ensemble. Whether his subjects were inanimate objects or live models, the immediacy of the instant print allowed Evergon a level of spontaneity, control and interaction with his subject matter that was integral to his creative process. A celebrated photographer, Evergon was born in Niagara Falls and spent several decades in Ottawa, working and teaching at the University of Ottawa. Now based out of Montreal, he teaches photography at Concordia University and continues his own daring work. Dating back to his studies at the Rochester Institute of Technology, New York in the early 1970s, Evergon has consistently used photography as an artistic medium. Since that time Evergon has achieved an international reputation as an artist and teacher, especially for his use of an extensive range of traditional and innovative photographic techniques. These range from exploration of long-neglected historical printing techniques through his pioneering use of colour photocopying, Polaroid photography and holography. Evergon has an extensive national and international exhibition history and his work represents a prolific 40 year career. 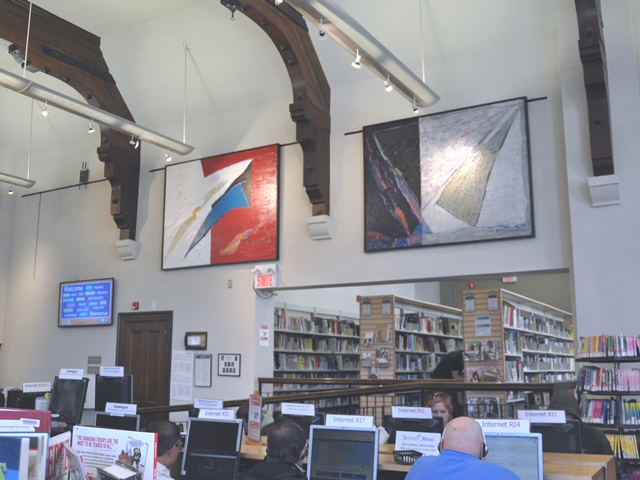 Title: Hell and Highwater (right)
Artist: Blair Sharpe
Year: 1985
Materials: acrylic on canvas
Location: Floor 1
City of Ottawa Art Collection: 1988-0027
Blair Sharpe is dedicated to the principles of abstract art. He is interested in the flatness of the canvas' surface and the shape, line, and colour of paint. He draws his inspiration from momentum, presence, and the grandeur of nature. Sharpe refers to the dynamism of water through line and shape, and uses thick texture for the restlessness of waves. He contrasts this with a flat, dark, and foreboding surface pierced with bright red and purple pigments. This contrast of opposing surface, line, and colour together produces compositional stability. The title, Hell and Highwater, reinforces this idea of stability in the face of disorder and distress. Educated in England, Germany, and Canada, Sharpe teaches at the Ottawa School of Art. 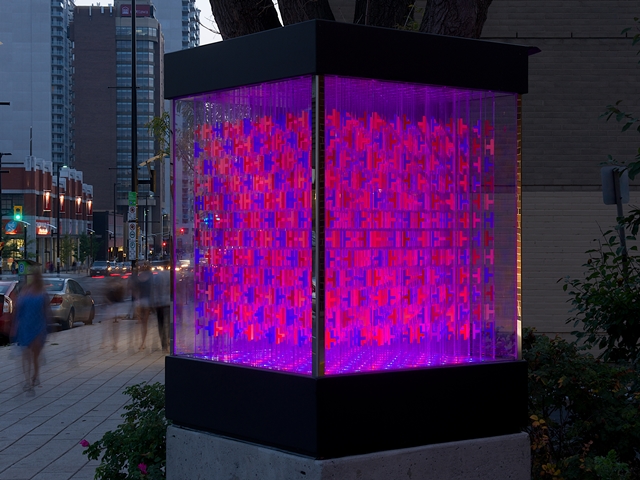 Title: Lattice
Artist: Mark Thompson
Year: 2015
Materials: LED, glass, steel
Location: Rideau Street
City of Ottawa Art Collection: 2015-0185
In front of the Rideau branch, many colours of Lattice represent interconnected knowledge. Strips of glass housed inside the artwork are lit by pre-programmed lights. The lights slowly change colour and intensity causing shifts in perception as we travel around the object. At night, the sculpture transforms the streetscape and expands our sensory experience. Light is paramount to the work of Mark Thompson. He is interested in the way glass refracts light and how the eye perceives it. Mark Thompson has worked with light using contemporary and traditional studio glass-working techniques for over 30 years. Lattice is part of Cube, Lattice, Sphere, Wave, a set of four sculptures along Rideau Street that explore how we perceive colour, light and motion. 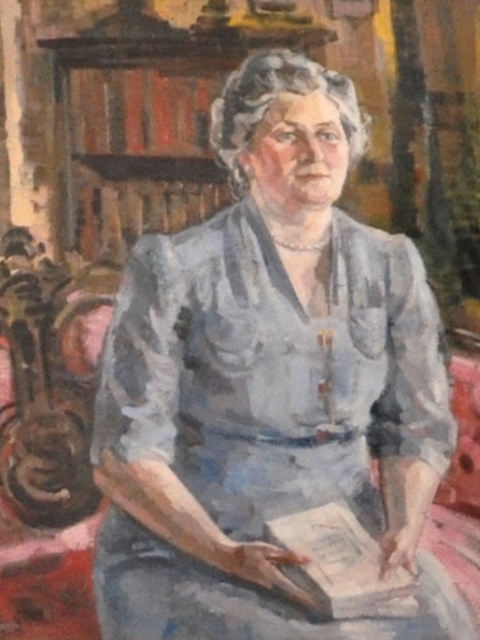 Title: Marie-Rose Turcot
Artist: Raymonde Gravel
Year: 1945
Materials: copy of an original painting
Location: Foyer
Ottawa Public Library: Gift from Library and Archives Canada
Born in Laurierville, Quebec, Marie-Rose Turcot (1887-1977) moved to Ottawa around the age of 20 to work in the civil service. Later, working as a journalist, she published in the daily newspaper Le Droit, as well as in several other weekly and daily publications in Ottawa and Montreal, sometimes using the pseudonym Constance Bayard. She also worked in broadcast journalism for the French radio station CKCH in Hull, Quebec. Turcot was the author of a novel, several collections of short stories, and poems, and was a pioneer in collecting and publishing Franco-Ontarian folk tales. She was active in a number of French-Canadian cultural organizations in Ottawa, including Le Caveau, as well as in professional associations. She lived in Ottawa for most of her life, and died in Orléans.

A plaque from the Ontario Heritage Foundation commemorating the life of Marie-Rose Turcot is permanently located in front of Rideau branch. The painter of her portrait, Raymonde Gravel, was born in Montreal in 1913. She studied in both the US and France.

Much like "Hell and Highwater" (right) this painting employs the principles of abstract art. Blair Sharpe creates tension between formal structure and spontaneous gesture. He is interested in the flatness of his surface and the shape, line, and colour of paint. There is a profound affinity to nature in this painting. Blair Sharpe uses the triangular motif to represent specifies of fish. Tshawytscha is a name used for a variety of Pacific salmon. Born in Montreal in 1954, Blair Sharpe's early life can best be described as nomadic, moving across Canada and overseas, before settling in Ottawa in 1973. Sharpe has exhibited widely, with numerous solo shows in Ottawa and Toronto, including a major mid-career survey at the Ottawa Art Gallery in 1989 as well as group shows across Canada and abroad. His work is represented in many collections. His public art commissions in Ottawa include the mural "Ouananiche" at the Jack Purcell Community Centre and "River's Invitation" at the Smyth Transitway Station. 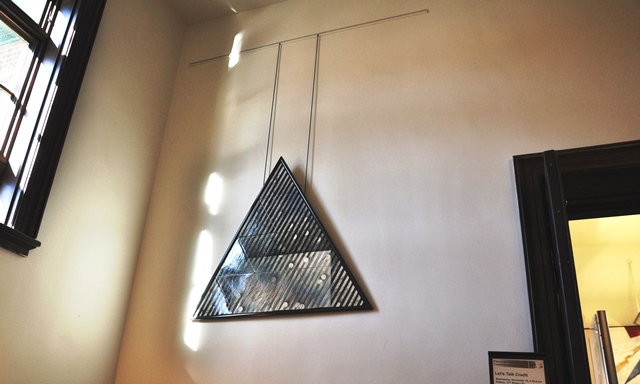 Title: Stripes and Moons Triangle
Artist: John Ikeda
Year: 1983
Materials: ceramic
Location: Foyer
City of Ottawa Art Collection: 1986-0057
John Ikeda is an internationally recognized ceramic artist known for his work with modern shapes and vibrant colours. His early childhood memories firmly established his aspirations for truth, beauty and simplicity in life and art. Born in Lethbridge (Alberta), his Japanese Canadian family suffered the consequences of internment and displacement in the 1940s. He currently lives near Ottawa in St. Bernardin (Ontario) and is inspired by the rural landscape and quiet lifestyle of the country. Ikeda has a BA from the University of Lethbridge, where he studied fine arts. His works can be found in the collections of the Canada Council Art Bank, the Department of Foreign Affairs and International Trade, the Ontario Clay and Glass Association, the Alberta Foundation for the Arts, and the Montreal Museum of Fine Arts.