The proposed draft budget 2016 sets out an affordable financial plan that would allow the City of Ottawa to make progress on its priorities, to live within its means, and to protect front-line services.

The City of Ottawa continues to make record investments in community priorities such as transit and active transportation, affordable housing, and economic development. At the same time, City Council has directed staff to undertake a multi-year review of efficiency measures in order to address structural financial issues, create a more innovative organization, and to ensure the City is able to deliver on its long-term priorities.

Draft budget 2016 proposes the City maintain a predictable tax revenue increase of 2% while increasing other fees in line with long-range affordability plans and the cost of delivering services. It also proposes several common-sense efficiency measures in order to address budget pressures.

Budget 2016 delivers on commitments to create a more affordable, caring, sustainable and prosperous city that will benefit every community. City-wide highlights for 2016 include:

The draft 2016 budget proposes to continue the City of Ottawa’s prudent financial plan by continuing the 2 per cent cap on property taxes.

Five years ago, City Council decided to bring greater financial discipline to the budget process by enacting a predictable, affordable tax target. This draft budget continues with the same fiscal discipline that has served Ottawa by growing the city’s reputation as a vibrant community where residents and tourists want to come to live, to work and to invest.

This budget maintains the trend of the past few years in stabilizing tax-rate increases at lower levels. It proposes a 1.75 per cent tax revenue increase – identical to the previous year’s increase for City and Police services. This translates to a 2 per cent increase for a residential property. The Transit levy is aligned with the Transit Affordability Plan at 2.5 per cent which translates to 2.85 per cent for a residential property.

This draft budget recommends a 2.5 per cent increase in the total amount generated from transit fares which is projected to generate $2.2 million in additional revenue.

This budget proposes capping the water and sewer increase at 6 per cent – translating into a $49 per year increase for each household. The water and sewer rate is in accordance with the City of Ottawa’s Long Range Financial Plan to finance capital projects, the Ottawa River Action Plan, and to manage aging water and sewer infrastructure. The City is conducting a Rate Review and plans to come forward with an updated plan in 2016.

Over the past five years, the City was able to maintain recreation services without increasing fees until 2015. Despite annual increases in the cost of delivering programs and maintaining facilities, the 2015 increase was limited to 2 per cent. The 2016 budget proposes a range of fee adjustments (both increases and decreases) to move towards cost-recovery, with the majority of adjustments being around 2 per cent.

In 2013, the garbage fee was reduced by 11 per cent from $93 to $82 for each Ottawa household. Budget 2016 proposes that this lower rate remain in effect for a fourth consecutive year.

While an even lower tax target in line with the inflation rate – which is running at 1.4 per cent – might seem ideal in the short term, it wouldn’t allow secure funding for the essential services that residents deserve and expect. The 2016 budget does allow for the consistent service delivery that makes Ottawa such a liveable city. It ensures that the City can address the needs of all residents, and in particular Ottawa’s most vulnerable residents through programs like those listed below.

The budget includes the City’s $16 million annual commitment towards its 10-year Housing and Homelessness Plan. This includes investments in rent subsidies, development of new units and renovations to older housing stock.

The Building Better Revitalized Neighbourhoods Program, a Council Strategic Initiative for 2016, will improve the health and liveability of a low-income neighbourhood. This program may include opportunities for public-private partnerships and redevelopment of vacant lands.

This year marks a renewed focus on, and investment in, recreation infrastructure and a focus on the programs that are important to the community, such as community rinks. The budget, not only invests $3 million in recreation centre upgrades and other community capital partnerships, but it also provides much-needed support to community programs.

The budget increases grants by 10 per cent for community volunteers who run the City’s more than 230 local outdoor ice rinks and provides an increase of $50,000 for grants for low-income families to access recreation programs.

As the City continues to build and improve our transportation network, the amount of traffic on our roads and the way we use them are changing. The 2016 budget continues to allocate funding for road safety infrastructure that is tailored to meet the specific needs of each ward and those city-wide, which will promote safety among all road users.  Through Strategic Initiative funding, $2.9 million of combined capital and operating money has been allocated to continue to enhance the safety of our roads.

$2.5 million will be specifically invested in the city-wide accessibility barrier removal program at City sites and continues the City’s commitment to improving accessibility for all residents.

Residents have made it clear that the protection and enhancement of natural environments in and around the city is a priority issue. The 2016 budget accounts for that vision, building on Ottawa’s reputation as a green City.

Aside from delivering new cycling lanes on Mackenzie Avenue and breaking ground on the first phase of the O’Connor Street bike lane, the budget also includes the planning and design of the Nepean Trail, a new cycling corridor that will extend approximately five kilometres from an existing multi-use pathway, near Woodfield Drive, to the intersection of Baseline Road and Farlane Boulevard. It will consist of new multi-use pathways, new bike lanes and signed bike routes on quiet local streets. The trail will provide a quiet alternative route parallel to Merivale Road for pedestrians and cyclists.

In addition to the City’s forestry efforts with tree planting in new communities and replenishing the many areas and neighbourhoods that are being ravaged by the Emerald Ash Borer, the City of Ottawa will continue to partner with Ecology Ottawa in the Tree Ottawa initiative – a special community effort to plant one million trees by 2017. Budget 2016 maintains the $125,000 for forestry, resulting in a total of $5.6 million funding for trees.

The City understands the importance of being greener and as such has set targets to decrease the total litres of fuel consumed. Budget 2016 includes a $500,000 investment in the Municipal Green Fleet program to assist in achieving this goal.

Street lighting accounts for 17 per cent of the electricity used by the City and in 2014 Ottawa’s street lighting costs were $7.2 million. LEDs allow for reduced energy consumption for street lighting and will help to cut street light maintenance costs by approximately 50 per cent. LEDs provide better quality of light, improving visibility in addition to efficiency. Street lights along Carling Avenue were converted to LEDs last year in a pilot project, and over the next six years, all remaining street lights will be changed to LED street lights.

Investments in economic development benefit every community across the entire city. By continuing to invest in major infrastructure projects across the city, this budget aims to develop a vibrant place where residents and tourists alike will want to stay and to play. Ongoing coordination, from a construction perspective, is taking place to align with Ottawa 2017 celebrations. As those projects are completed and are brought online, the City’s reputation as the place to be in 2017 will only grow.

The budget maintains funding for the O-Train Confederation Line light rail transit project as tunneling continues through the downtown core and parts of the City’s Transitway continue their conversion to light rail. This project is creating thousands of new jobs and enhancing the National Capital Region’s long-term economic growth and prosperity. But funding for public transit projects doesn’t end there.

Within the precinct, the expansion of the Ottawa Art Gallery and redevelopment of Arts Court will continue on the vacant, City-owned land at the corner of Daly Avenue and Waller Street. The new and larger Ottawa Art Gallery will connect with redeveloped space in Arts Court to establish a municipal arts hub that will include a 250-seat multi-purpose and film screening room, along with a new 120-seat theatre and four classrooms for the University of Ottawa.

In addition, new streetscaping on Rideau Street will improve the environment in this arts precinct and help to accommodate increased traffic as a result of this project as well as Confederation Line construction and the Rideau Centre expansion. The public-realm improvements on Rideau Street will be from Sussex Drive to Dalhousie Street and on Nicholas Street from Rideau Street to Besserer Street.

Investment is planned across the city to accommodate growing neighbourhoods in the west, south and east of Ottawa. The design of a four-lane realigned Greenbank Road from Chapman Mills Drive south to Cambrian Road – including new bridges crossing the Jock River – will be key for the continued rapid development of Barrhaven.

Preliminary design will begin on the Kanata South Link, which will accommodate growth in Kanata South and Stittsville by widening Old Richmond Road and West Hunt Club Road between Hope Side Road and Highway 416.

To address growth in the east and to provide an additional east-west arterial link, the budget allows for the start of construction of Brian Coburn Boulevard, a new two-lane road with cycle lanes and sidewalks, between Navan Road and Mer Bleue Road.

Investing In Our Future

Continued investment in Ottawa’s infrastructure is critical to the City’s economic future. A quick drive around the city shows that Ottawa is investing heavily in building new infrastructure. Major projects like the O-Train Confederation Line and the expansion of the O-Train Trillium Line tend to grab the headlines, but there are construction projects underway that touch every corner of the city.

It’s critical that the City also continue to renew our existing assets. This budget has been designed to do just that, keeping us on target to meet our capital forecast commitments. The City will invest $326 million for renewal of infrastructure across the city in 2016, from a total of $533 million in capital works. This significant investment continues to confirm the City’s commitment to preserving our roads, bridges, watermains and City facilities to a high standard.

This budget is investing in Ottawa’s future with: 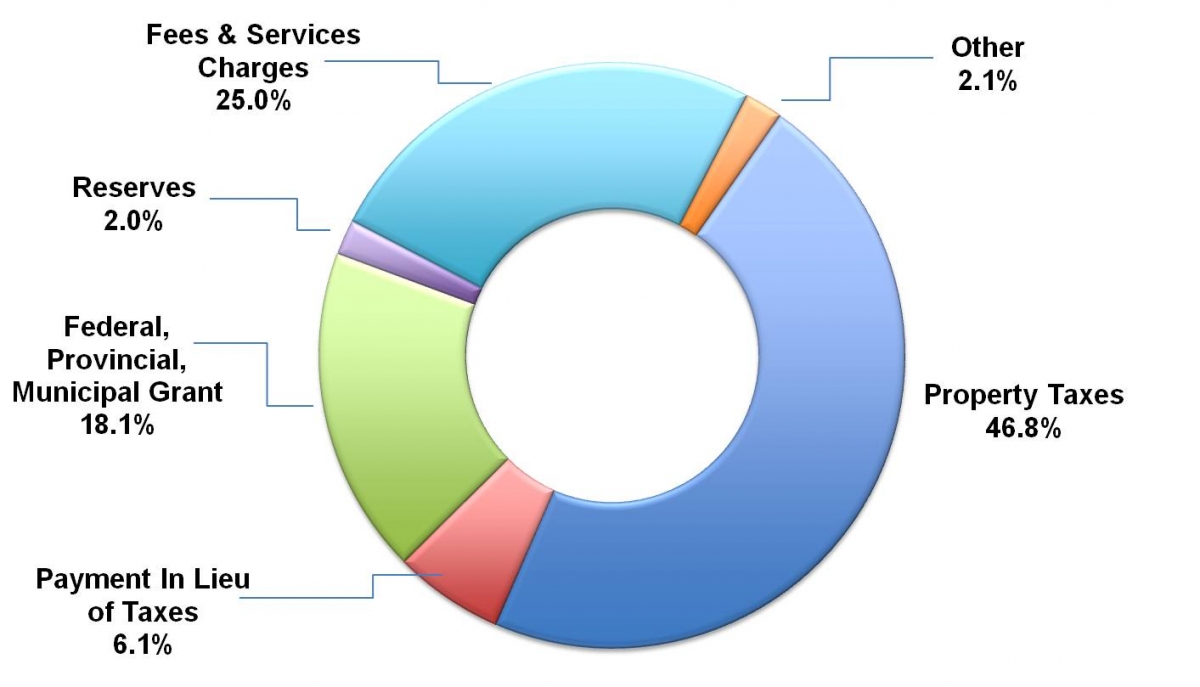 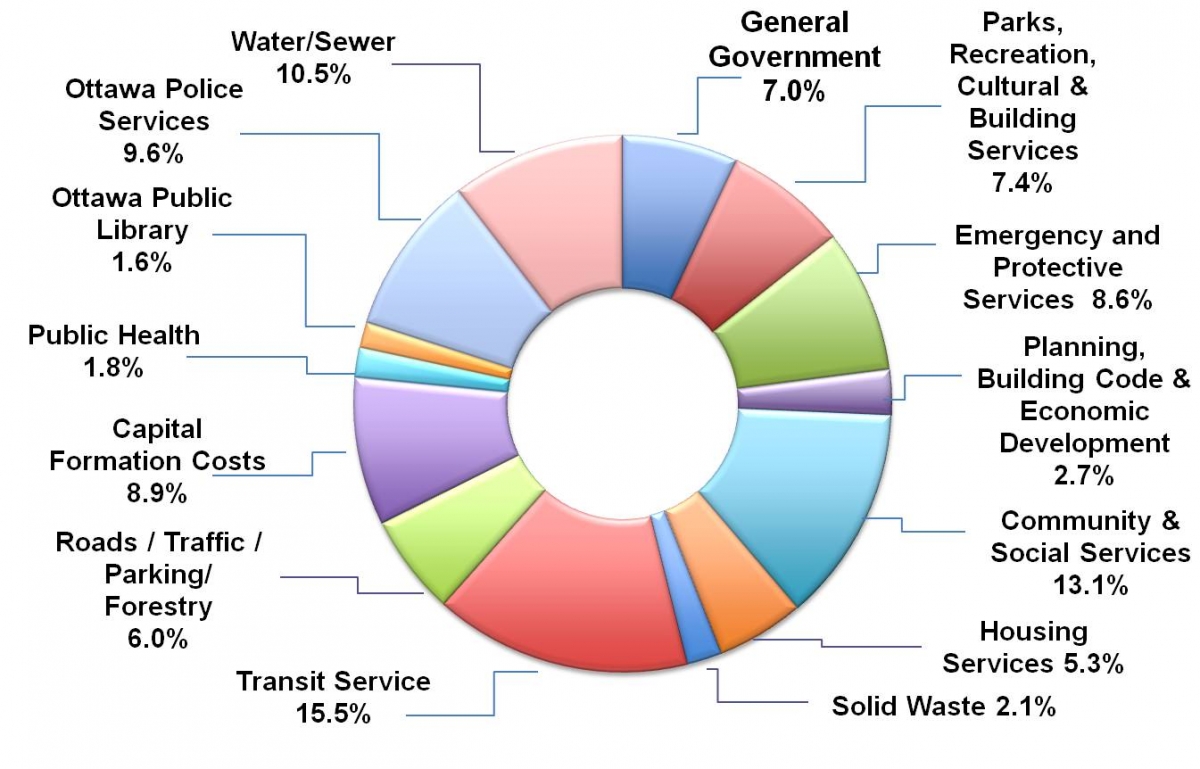 The 2016 draft budget addresses a number of financial challenges facing the City arising from winter maintenance costs, insurance changes, arbitrated settlements for 2014 and 2015, and unachieved revenue targets such as in sponsorship.

In October, City Council directed staff to undertake a multi-year review of efficiency measures to address these challenges, while protecting front-line services. The draft budget continues this objective by proposing a number of internally focused cost-saving measures. In line with Council direction, new revenue would include increases to user fees consistent with those included in past budgets.

To accomplish this, the City has been able to first look internally to find savings, and spreading those efficiencies across multiple years has resulted in a balanced 2016 budget. Measures proposed for 2016 include:

In addition to the goal of finding efficiencies, the City also set a target of achieving $8 million in new revenues.

The majority of increases will be in non-departmental accounts such as the sale of surplus lands, PILT (Payment in Lieu of Taxes) revenues and Hydro dividends. The implementation of new user fees and exploring opportunities to generate revenues from current services will also occur following established Council priorities: