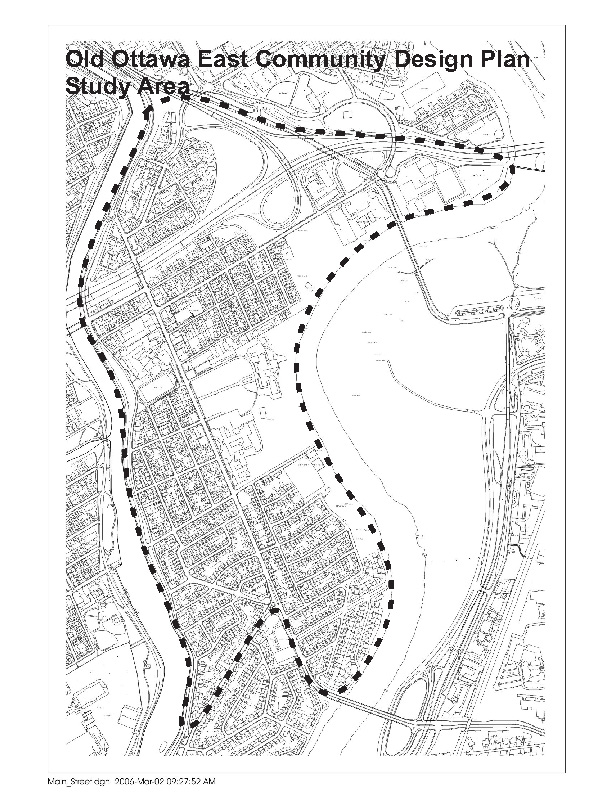 Old Ottawa East is located between the Rideau Canal and the Rideau River and extends the full length of Main Street from Colonel By Drive on the north to the McIlraith Bridge on the south.

The goal of this Community Design Plan [PDF version 3.4 MB](CDP) is to focus on Main Street but also be responsive to a vision of the community as a whole. The plan is meant to provide a broad and integrated 20-year vision and guidance for the growth of Old Ottawa East.

The Background section of the CDP sets out its goal and objectives. It also provides the policy and regulatory context, demographic profile as well as the community vision and themes of the Plan.

The community divides naturally into the corridors, precincts and neighbourhoods that physically comprise it. Main Street and Hawthorne Avenue are the primary corridors that can be divided into precincts as they exhibit distinct characteristics and functions. The neighbourhoods are distinguished by their historic development and are predominantly residential in nature with the exception of the area adjacent to the Lees Transit Station, which holds the potential for a greater range of uses. The characteristics of these various districts within the community are surveyed and described, along with an indication of their potential for future growth and change. The condition of the existing infrastructure is also described including an indication of the maintenance history and operational issues.

3.0 Land Use and Design Strategies

The corridors, precincts and neighbourhoods are used as the framework to focus the policy direction of the CDP. Certain general and common policies are outlined for the Main Street corridor. All of the precincts within the Mainstreet corridor and the contiguous neighbourhoods are then addressed specifically in order to provide a comprehensive vision for future growth and change. Maps are provided to supplement and illustrate the policy direction with respect to Schedule B Amendments to the Official Plan, Schedule A – Land Use, Urban Design Strategy, Parks and Open Space, Heritage Resources, Built Form.

This section outlines the means that will be used to implement the strategic directions of this Plan. They include the following key components:

This CDP [PDF version 3.4 MB] and Secondary Plan along with the related Official Plan and Zoning By-law Amendments were approved by City Council on August 25, 2011. With no appeals being received following the statutory notification all related amendments are now in full force and effect.