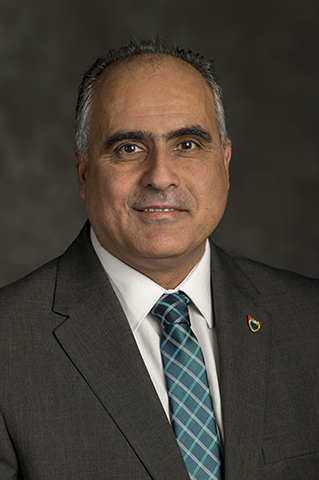 Residents of Osgoode Ward first elected George Darouze to Ottawa City Council in October, 2014 and he was re-elected for a second consecutive term in 2018.

George immigrated to Canada from Lebanon in 1990 and has lived in the Ottawa area since that time. He and his wife Sue quickly became comfortable with the Ottawa lifestyle and decided Greely was the best place to raise their two sons, John and Tony. George and his family, including his parents (John and Teresa), two brothers (Tony and Elie) and sister (Mariane), are all proud to call Ottawa home.

George is fluent in English, French and Arabic. He has a degree in Telecommunications from ALBA University and has pursued Continuing Education in the subject of electronic training in voice/data and wireless communication sales.

Before being elected to office, George held a number of managerial positions with telecommunications companies, including Eastern Region Sales Manager for Worldlynx Wireless, and Director of Business Development for the Ottawa-Toronto Region for Smart Cell Communications.

George has held positions with community groups, such as Social Director and President with the Osgoode Carleton Snowmobile Trail Club (OCSTC). As Club President, he was the representative on a committee to refurbish the Osgoode Pathway into a multi-use 21-kilometre recreational pathway. While leading the OCSTC, the organization received Provincial, Canadian and North American “Club of the Year” awards. In 2011, George was personally awarded Volunteer of the Year by the Ontario Federation of Snowmobile Clubs. Furthermore, his passion for snowmobiling included him joining the Ontario Federation of Snowmobile Clubs Board of Governors as the District 1 Governor.

George’s volunteer work was also recognized in 2011 when he received the Osgoode Ward Community Volunteer Award, and in 2012 when he became a Queen’s Diamond Jubilee medal recipient.

During his first term of council, he was the Vice-Chair of Agricultural and Rural Affairs Committee, as well as a sitting member of the Audit Committee, Community and Protective Services Committee (CPSC), IT Sub-Committee and Transportation Committee. With his extensive work championing Ottawa Paramedic Services through CPSC, the Ontario Paramedic Association awarded him with an Appreciation Award in 2017.

Additionally, he sits on the Board of Directors for South Nation Conservation, Osgoode Care Centre and Watson’s Mill Manotick Inc. Within the community, George is also a member of the Greely Lions; Greely Legion; Osgoode Fish, Game and Conservation Club; and the Osgoode Carleton Snowmobile Trail Club.

George always encourages a close-knit community, a sustainable rural economy, and high quality rural life within the City of Ottawa.