Overview of the Study

Purpose of the Study

The purpose of this project is to undertake a review of the lands surrounding the future Pinecrest and Queensview Light Rail Transit (LRT) stations to guide future development that supports transit and integrates with the surrounding residential neighbourhoods.  This project aims to produce new area-specific policies in the Official Plan and corresponding zoning amendments.

The Pinecrest and Queensview LRT stations are among 23 new stations being added as part of Stage 2 of Ottawa’s LRT system. Stage 2 will build on the current Confederation and Trillium Line investments to add 40 kilometres of track farther east, west, and south in the City. Stage 2 is planned to be operational for 2025. 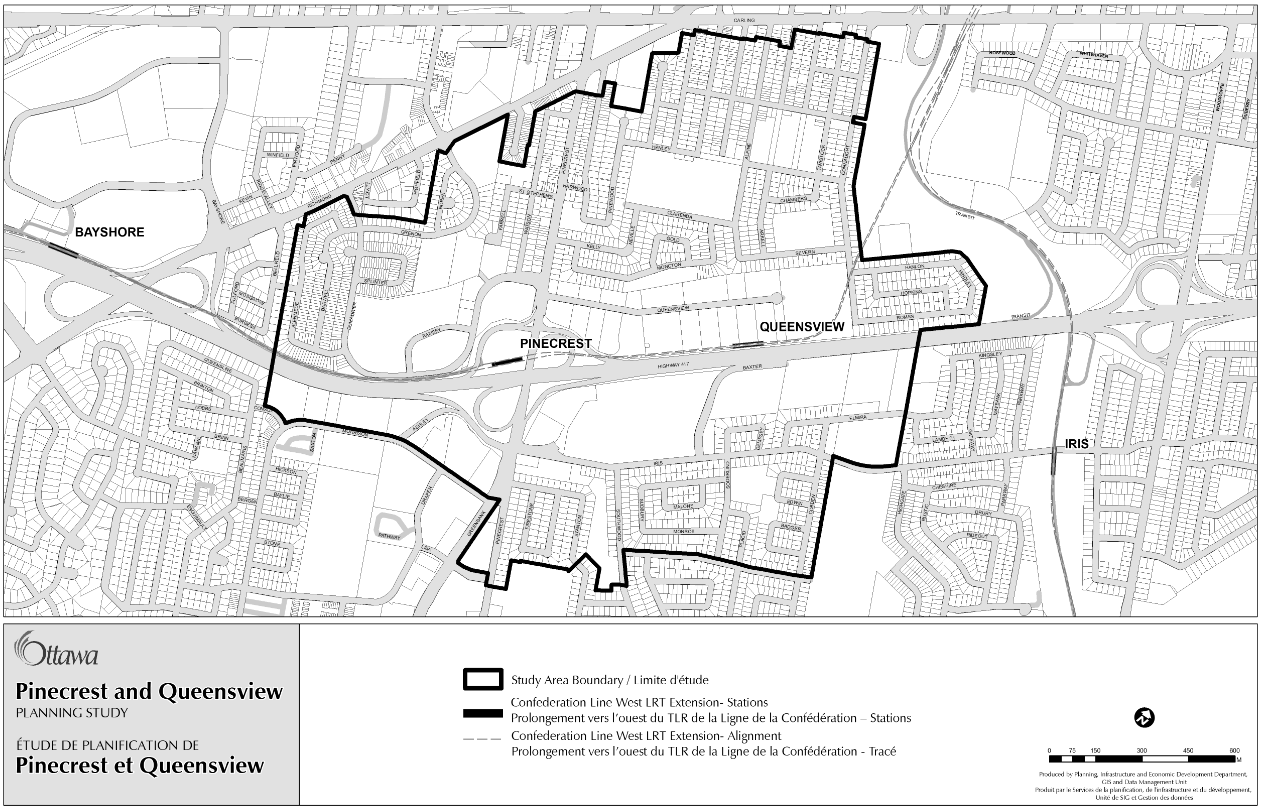 Objectives of the Study:

This planning study will not:

The Pinecrest-Queensview Planning Study was initially launched in early 2018 and held its first public engagement event in June, 2018. However, the study encountered delays and periodic pauses in order to resolve multiple issues, including revisions to LRT station design and access and to determine policy alignment with the new Official Plan (OP). Since the area-specific policies of the study will build on and deviate from OP policy, it was critical to establish the new draft OP policies before considering recommendations for this study.

With the launch of the draft OP in late November 2020, the study is once again moving forward with a revised study title, called the Pinecrest-Queensview Stations Secondary Plan Study, and the following updated timeline moving forward:

Spring 2021: Public Open House #2 to engage stakeholders and the public on draft recommendations

The Lincoln Fields Station Area Secondary Plan Study shares a similar timeline and many of the same stakeholders. In order to avoid duplication and streamline participation for stakeholders, future public events will be paired together.

To receive occasional emails about the study’s progress, including web updates and future meetings, please sign up.

If you have already been receiving emails about this study, there is no need to sign up.

The purpose of a secondary plan is to adapt land use planning policies provided by an Official Plan to address a local context. As a result, the new Official Plan sets the stage for the Pinecrest and Queensview Stations Secondary Plan Study and any subsequent policy direction that may be required in order to achieve the study objectives.

The following provides a brief summary of draft Official Plan policies (as of November 2020) that are relevant to the Pinecrest and Queensview Stations study area. Stakeholders and study participants are encouraged to review the new Official Plan in detail in order to help identify any gaps and opportunities to improve outcomes in the study area.

The study area is predominantly located within the Inner Urban Transect Area, which can be found in Schedules A and B2. This area surrounds the downtown core and is characterized by its mix of urban and suburban built form. The Inner Urban area is intended to become more urbanized while prioritizing active transportation and public transit. Infill, or regeneration, provides important opportunities for creating 15-minute neighbourhoods and expanding housing choices.

A small portion of the study area, west of Greenbank Rd and south of Iris St, is in the Outer Urban Transect Area (see Schedules A and B3). This area will see a more gradual urbanization, with policies that recognize its dominant suburban pattern but adds flexibility in terms of dwelling types and support for active transportation and public transit.

Hubs generally replace the former Mixed-Use Centre designations and tend to be located at important destinations on the rapid transit network. They are the focus for density and urban development, which may include major employment and high-rise residential, and are intended introduce land use flexibility in order to contribute to 15-mintue neighbourhoods.

In the Inner Urban Transect Area, buildings within 400 metres walking distance of a rapid transit station shall have a minimum height of three storeys and a maximum height of twelve storeys – unless otherwise specified in a secondary plan. In other words, the Hub policies establish baseline building heights around O-Train stations and this study will determine where and by how much those minimum and maximum heights should be adjusted.

The new Official Plan designates lands around Pinecrest and Queensview Stations as a Hub (see Schedule B2). This Hub replaces the urban employment area around Queensview Drive and extends slightly west of Pinecrest and south of Highway 417 to Iris St and Baxter Rd.

Protected Major Transit Station Areas (PMTSAs) are a discretionary tool that municipalities may use in order to establish transit-supportive densities within a designated area that surrounds a rapid transit station area. The new Official Plan designates lands within the Hub surrounding Pinecrest and Queensview Stations as a PMTSA (see Schedule C1).

The new Offical Plan includes policies that require a minimum density target of 200 people/jobs per gross hectare in the Pinecrest-Queensview PMTSA, as well as inclusionary zoning policies that will require the provision of affordable housing as part of new developments.

There are no Mainstreet Corridors in the study area, but new Minor Corridors are proposed for Pinecrest Rd and Iris St (see Schedule B2). Queensview Drive is being reviewed for potential designation as a Minor Corridor.

Minor Corridor policies indicate that built form is intended to be low mid-rise (generally four to six storeys) but given the shallow lot depths on Pinecrest Rd and Iris St, this study is likely to propose maximum building heights of four storeys in these locations.

The new Official Plan includes built form overlays which provide additional direction (over and above Transect policies) to guide the changing character of neighbourhoods through regeneration. Those designated as Transforming Neighbourhood are experiencing rapid change in urbanization from low to mid- or high density. The intention of the policies is to limit low density built form and car-oriented development, for example by prohibiting new private approaches (i.e. driveways), as well as ensuring positive contributions to the public realm. The Evolving Overlay, on the other hand, recognizes a more gentle evolution from suburban to urban built form.

Schedules B2 and B3 identify the Hub and built form overlays in the study area. The vast majority of the study area is designated as an Evolving Overlay. The only exceptions are Foster Farm, around Dumaurier Ave, which has a Transforming Overlay, and the lands south of Highway 417 and west of Greenbank, which do not have an overlay.

As We Heard it Report [ PDF 1,888 Kb ] : the purpose of this document is to report back to landowners, residents, businesses and community groups on the issues and ideas raised during and following the community input session. The comments received will inform subsequent directions for the Pinecrest-Queensview Stations Area Planning Study.

How will this project impact the study area?

This project aims to provide direction on how the study area can grow through an Official Plan amendment with new Area Specific Policies and possibly zoning amendments. Area Specific Policies could provide guidance on appropriate land uses and building heights, built form, enhancements to pedestrian and cycling linkages, and the public realm.

How can I get involved?

There are several ways you can stay informed and engaged throughout the study process:

Who is involved in this study?

Many stakeholders are involved in this planning study: