The Safer Roads Ottawa Program is a leading community partnership between Ottawa Fire Services, Ottawa Paramedic Service, Ottawa Police Service, Ottawa Public Health and the Transportation Department committed to preventing or eliminating road deaths and serious injuries for all people in the Cit

The annual collisions report provides statistical data on all reported collisions on City of Ottawa roads during a five year period.

Remember to “Walk like your life depends on it!” and be aware of your surroundings!

The City of Ottawa has an extensive program to make streets safer for pedestrians that includes measures such as:

The City produces a comprehensive Pedestrian Plan as part of the Transportation Master Plan to better integrate pedestrian travel into the transportation system.

Many children are walking and biking to school on our roads. However, younger children often lack the skills to negotiate traffic safely. Help them to walk - safely to school - by stressing important safety rules.

Pedestrian Crossovers are a type of traffic control used in Ottawa. Crossovers and their associated crosswalks are located at low speed, low-medium volume intersections, midblock and at roundabouts.  Learn about the form, function and usage of pedestrian crossovers and see where in Ottawa they are installed.

On January 1st, 2016, the Highway Traffic Act was revised to include a regulation which identifies a new type of Pedestrian Crossover. As a result of the legislative framework, including the Act, new regulation (402/15), and modifications to Ontario Traffic Manual Book 15 – Pedestrian Crossing Facilities,  municipalities can install pedestrian crossovers on low speed, low to medium volume roads.

What is a Pedestrian Crossover?

At Pedestrian Crossovers equipped with flashing beacons, pedestrians may push a button to make the beacon flash to enhance driver’s awareness that they will be crossing.

It is the responsibility of both drivers and pedestrians to understand and follow the rules at Pedestrian Crossovers.

The City of Ottawa will be installing up to 60 Pedestrian Crossovers each year for the next three years as part of a City Council approved pilot program.  Crossovers will be situated at warranted locations throughout the city, starting in the summer of 2016. In the first year, these locations will include: new crossings where no crossing existed before, retrofitting of existing crossings, and roundabouts.

At roundabouts where Pedestrian Crossovers are being installed, pedestrians will now have the right of way over vehicles.

Pedestrian Crossovers will be installed on low speed, low to medium volume roads, and at most roundabouts.

The locations of the planned 2016 Pedestrian Crossovers in Ottawa are shown in the map and table below. The list will be updated as new warranted locations are added.

Map of Pedestrian Cross over Locations:

At roundabouts and roads with centre medians, marked pedestrian crossovers are treated as two stage crossings with the median or splitter island providing a pedestrian refuge.  For vehicles passing through a Pedestrian Crossover at these locations the driver may proceed once the pedestrian has fully crossed their lane of traffic (i.e. curb to median).  They do not have to wait for the pedestrian to cross the whole roadway.

Pedestrian Crossovers are a type of traffic control, which are devices that regulate the movement of traffic. Other traffic control types include Stop signs, Yield signs and traffic control signals.  All types of traffic controls have legal requirements for road users and are identified in the Ontario Highway Traffic Act.  Where there is such a traffic control device, the term crosswalk refers to the painted markings on the road.  It is typical for all controlled crossings to have a crosswalk. Forms of crosswalks are typically found at intersections, midblock locations, roundabouts and channelized right turns. In the first year of the Pedestrian Crossover pilot program the Crossovers and their associated crosswalks will be located at low speed, low-medium volume intersections, midblock and at most of the City’s single-lane roundabouts.

Drivers and cyclists will be fined $150 to $500 with 3 demerit points for failing to yield for pedestrians at pedestrian crossovers.

Cyclists can be fined $85 for failing to dismount and walk their bicycle when crossing a pedestrian crossover.

Pedestrians can be fine $35 for leaving the curb or other place of safety at a pedestrian crossover and walking, running or moving into the path of a vehicle that is so close that it is impracticable for the driver of the vehicle to stop safely.

The review will consist of an assessment of the location through a warrant process established by the Ministry of Transportation.

The appropriate Pedestrian Crossover design for warranted locations will be determined and a list will be provided to Council for approval and funding.

Approved locations will for the most part be implemented in the following calendar year, provided funding availability.

The History of Pedestrian Crossovers in Ottawa

Pedestrian Crossovers have a local history dating back to the early 1960s when a large number were installed across the greater Ottawa area. There are several types of crossovers which are identified as Type 1 or Type 2 crossovers. Type 1 was used in Ottawa dating back to early 1960s. This type is distinguished by the side mounted signs, overhead signs on wires and flashers. It is the most complex and was used at multi-lane crossings with higher speeds and traffic volumes.

These treatments provided a solution to pedestrian needs for a number of years, but were questioned in terms of safety in the 1970s; as a result, in the mid-1980’s, it was decided by Council that mid-block traffic control signals should be used in place of Pedestrian Crossovers and that Pedestrian Crossovers would no longer be implemented. At this time we do not intend to install the Type 1 crossovers again in Ottawa.

When the Making Ontario's Roads Safer Act, or Bill 31, was passed in June, 2015, Type 2 crossovers were created. Pedestrian Crossovers to be installed in Ottawa beginning June 2016 fall under Type 2 designation only.

B – Distinguished by overhead signs, side mounted signs, and rapid rectangular flashing beacons. These are typically used on arterial/major collector roads with higher speeds (up to 60km/h).

C – Distinguished by side mounted signs and rapid rectangular flashing beacons. These are typically used on collector roads, or lower volume multi-lane roundabouts.

D – This type is the most basic. It includes only the side mounted signs. These are typically used on local roads, or single lane roundabouts.

We want to hear from you

Please provide your feedback on the Pedestrian Crossover Pilot Program by contacting 3-1-1 (TTY 613-580-2401) or pedestriancrossover@ottawa.ca

Ottawa’s roadways are among the safest in Canada.

In Ottawa from 2009-2013 people who ride motorcycles were involved in 790 collisions leading to 12 fatalities and 542 injuries on Ottawa streets.

People who ride motorcycles are considered vulnerable road users for the following reasons:

Every May, the motorcycle community of Ottawa and SRO launches “Keep an Eye Out for Motorcycle” campaign.

Effective September 1, 2015, rules of the road have changed to ensure the safety of all road users.

It is illegal to talk, text, dial or e-mail using hand-held phones and other hand-held communication and entertainment devices, while driving.

As a driver, it's your responsibility to focus on driving so that you can react to changing road conditions. Leave the Phone Alone!

The safety of all road users is paramount and that includes cyclists. New cycling measures are directed at encouraging cycling, promoting road safety, and sharing the road.

It is important to protect the safety of those who are assisting others at roadside, often in dangerous roadside conditions. The “slow down and move over” law has been extended to include tow truck operators who are stopped on the roadside with their amber lights flashing and actively assisting a disabled vehicle. This law already includes our emergency workers—police, firefighters and paramedics.  Motorists who do not slow down and, where possible, move over into another lane when a tow truck is stopped on roadside with its amber lights flashing are subject to a fine.

More information is available from the Ontario Ministry of Transportation

Want to increase road safety in your community?

To achieve our goal of zero fatalities and injuries on Ottawa’s streets we need your support. Invite Safer Roads Ottawa to your next community association or gathering. From discussing traffic calming measures, increased enforcement or organizing a bike rodeo Safer Roads Ottawa can offer your community a variety of tools to make you neighbourhood safer.

The following videos are examples of community initiatives Safer Roads Ottawa have been a part of: 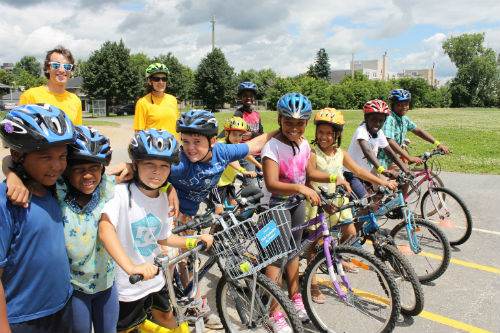 Ottawa's Selective Traffic Enforcement Program (S.T.E.P.) is implemented under the banner of Safer Roads Ottawa. Each month, two traffic safety priorities (themes) are highlighted for additional enforcement. An analysis of the City's traffic collision / injury data helps to determine the level of emphasis that each traffic safety priority receives. The severity of the issue will dictate if some themes receive additional months of enforcement.

In terms of timing of specific themes, consideration is given to the following:

The Highway Traffic Act (HTA) provides a municipality the authority to designate a part of a roadway under their jurisdiction as a Community Safety Zone (CSZ). As per the HTA, the official designation of a segment of roadway as a CSZ requires the enactment of a municipal by-law which includes the designated area and the erection of regulatory signs on the designated part of the roadway.

Once a CSZ is designated and established, the HTA provides that any person convicted of specific offences described in the HTA is liable to increased fines if it is committed while in a CSZ. For example, fines for speeding in a CSZ will be doubled for each kilometre-per-hour driven over the speed limit. Similarly, fines for careless driving for contraventions of other rules of the road, including traffic signal officences, will also be doubled.

Regulatory, bilingual CSZ signs are posted along the affected segments of a roadway to designate both the beginning and the end of a zone. The rules of the road do not change within the zone; only the penalties for violations are increased.

Samples of the CSZ Begins and Ends signs are shown below: