COVID-19 is an unprecedented situation and the City of Ottawa is committed to protecting people and the community.

The Province of Ontario has allowed certain businesses and workplaces to reopen, including all municipal construction projects, as long as they comply with strict measures for public health and safe operations. In addition to the City’s ongoing work on critical infrastructure projects, we are now able to resume work on other construction projects that were paused due to the COVID-19 outbreak.

The City is working closely with the industry and complying with restrictions and recommendations provided by municipal, provincial and federal health officials, as well as the Ministry of Labour, Training and Skills Development.

The City of Ottawa continues to take precautionary steps to protect members of the public. As an alternative to hosting in-person public information sessions, information is being posted to Ottawa.ca. The City remains committed to keeping the public informed of projects occurring in your neighbourhood.

The City of Ottawa invites you to review and provide comments on the Reconstruction of Albert Street/Queen Street/Slater Street from Empress Avenue to Bay Street and Bronson Avenue from Queen Street to Laurier Avenue Project by June 30, 2020. Information can be submited by email or by phone to the contact below.

The City has a proactive communications approach. The project team will update you on the project using different methods to communicate including letters and posting information on Ottawa.ca.

What: The City of Ottawa is undertaking the rehabilitation of Albert Street, Queen Street, and Slater Street from Empress Avenue to Bay Street and Bronson Avenue from Queen Street to Laurier Avenue.

The proposed rehabilitation will also include the realignment of a portion of Slater Street west of Bronson Avenue. Streets will be reconstructed to follow the “complete streets” framework which will integrate requirements for accessibility, pedestrian movements, cycling facilities, and bus transit requirements.

Why: The City is renewing the underground infrastructure to improve performance of our sewers and to improve the reliability of the water distribution system. The inclusion of integrated requirements for accessibility, pedestrian movements, cycling facilities, and bus transit requirements align with the direction provided by the City’s Accessibility Design Standards and the City’s Official Plan, and the City’s Downtown Moves master plan. 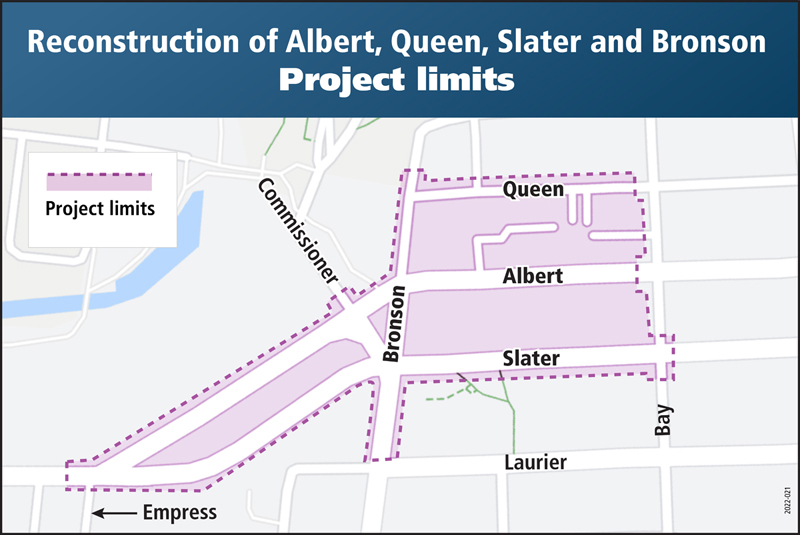 When: The current project schedule is as follows:

Notices will be sent prior to construction.

Who: The City of Ottawa has retained the design consulting firm, Parsons Inc, to develop a design for the reconstruction of Albert Street/Queen Street/Slater Street from Empress Avenue to Bay Street and Bronson Avenue from Queen Street to Laurier Avenue Project.

The City of Ottawa has identified a requirement for the rehabilitation and/or replacement of portions of its underground infrastructure along Albert Street, Queen Street, Slater Street, and Bronson Avenue. The project limits are Albert Street from Empress to Bay, Queen Street from Bronson to Bay, Slater Street from Empress to Bay, and Bronson Avenue from Queen Street to Laurier Avenue. The overall purpose of this project is to undertake a preliminary and detail design leading to a construction project. The project will include the replacement of portions of the existing sewers, roads, and watermains as well as the rearrangement and reconstruction of the street right-of-way in accordance with the results of the Albert and Slater Streets Post Light Rail Transit (LRT) Repurposing Functional Design Study that was approved by Council of the City of Ottawa in 2018. The streets will follow the complete street framework, in which physical elements will be incorporated if possible into the design such that streets offer safety, comfort and mobility for all users.

Construction funds will be provided in future budgets.

For further information about this project and/or to submit comments on the project, please contact the City project manager:

Welcome to the Online Engagement Opportunity for the Reconstruction of Albert Street, Queen Street, Slater Street from Empress Avenue to Bay Street and Bronson Avenue from Queen Street to Laurier Avenue project. This is an opportunity for you to learn about the project and provide input on the planned works. We encourage you to provide your comments.

Should you have any questions regarding the material, or any other aspects of the project, please feel free to reach out to the City Project Manager.