Watch or listen to Council meetings

The City of Ottawa continues to take COVID-19 seriously, and in following the advice of provincial and federal governments is making significant changes to services and programming to help protect health and wellbeing of the community. City Hall is temporarily closed to help stop the spread of COVID-19. In-person Committee and Council meetings have been cancelled. Such meetings, as warranted, will be held electronically until further notice. For more information about service disruptions, please visit our COVID-19 webpage: https://ottawa.ca/en/health-and-public-safety/covid-19-ottawa.

You can watch live City Council or Committee meetings on the Ottawa City Council YouTube Channel . Regular City Council Meetings will also be broadcast live on RogersTV Cable 22 and live streamed on the RogersTV Website.

Watch or listen to Council and Committee meetings

Watch or listen to live meetings in progress, or access the video or audio of past meetings, directly on YouTube.

City Council meeting video with closed captioning is available in both French and English courtesy of Rogers TV.

For most Standing Committees, Sub-Committees, Transit Commission and the Police Services Board, the meeting audio is available in the language being spoken in the meeting room.

Council, committee and board agendas and minutes

Please note that while the City of Ottawa is transitioning to new E-Agenda software, you can continue to access Council and Committee materials through the existing SIRE E-Agenda page.

If at any time you are unable to find a document or access this page, please send an email to Committees@ottawa.ca (link sends e-mail)

Upcoming meetings of the Ottawa Board of Health, Ottawa Police Services Board, Ottawa Public Library Board and Committee of Adjustment can also be found in SIRE E-Agenda.

Looking for committee audiocasts that occurred prior to January 2013? 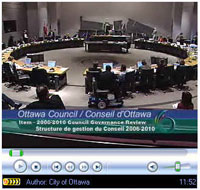 City Council videos for meetings that occurred from 2006 to 2012 are provided below.

How does Council govern your City?

Who is your City government?

How does City Council affect you?

Decisions made by City Council have a direct effect on the residents of Ottawa and impact the type, level and variety of municipal services provided to you. Council is the decision-making body responsible for the administration of the City of Ottawa and is responsible for turning community needs into municipal services including policing, water, transit, garbage and recycling, sewers, fire and paramedics.

How does Council govern your City?

Are you welcome at City Council, standing committee and advisory committee meetings?

YES! All City Council, standing committee and advisory committee meetings are open to the public and your attendance is welcomed and encouraged. To find out when meetings are scheduled, you have several options:

The meeting listings include the date, time and location, the agenda and a listing of the staff contact for each meeting.

While you are welcome at all meetings, it is only at standing committee and advisory committee meetings that you may make a presentation.

How can you as a resident be involved in municipal affairs?

As a resident you have a vital role in the government of your City. Qualified electors have the right to vote in municipal elections to elect the Mayor, City Councillors and school board Trustees. While elections are held every four years, residents can be involved in the process at all times by:

Plug in to your City and sign up for the City’s e-subscription to receive a weekly Meetings at Ottawa City Hall next week advisory.

Sign up for an e-subscription to receive City Council Updates and a weekly advisory of upcoming meetings at City Hall.

As a subscriber, you will receive a City Council Update following each council meeting that summarizes some of the major decisions made by City Council. You will also be sent a weekly notification of upcoming Meetings at Ottawa City Hall.

If you prefer, you can sign up for an e-subscription to receive a weekly advisory of upcoming Meetings at City Hall only.

You can unsubscribe at anytime.

The Adobe Acrobat browser allows you to zoom in and see better details. Download the viewer.