Here are the facts on intersections

Between 2004 and 2006, Ottawa’s intersections with stop signs accounted for:

Speeding has taken its toll on Ottawa’s roads

Speeding is a form of aggressive driving – along with tailgating and red-light running. It is an epidemic on our roadways, and is a factor in nearly half of the traffic deaths in Ottawa.

Things to remember when you are behind the wheel

Tell us your story

But in terms of traffic safety, every statistic is more than just a number. It’s a life that touches so many other lives and no dollar value can ever be placed on it. Very often, collisions may make a headline for one day, but its scars on peoples’ lives last forever.

Teach others the importance of slowing down.

Tell us how speeding or a collision from speeding touched your life. It can be a first-hand account or an experience that touched a friend or loved one.

Give us a paragraph or two on the experience and how it impacted you or your life, and send it to rob.wilkinson@ottawa.ca

Submissions will be reviewed and a story will be selected for articles and features for the media. In addition, the person submitting the story has the option to be honorary chairperson of the upcoming “Speeding Costs You” public education campaign. Or you can have the campaign be commemorated to someone who lost his or her life in a traffic collision.

Personal information contained on this form is collected under the authority of the Municipal Act, 2001, S.O. 2001, Chapter 25, subsection 10(1). This information is collected for the administration and management of the City of Ottawa's Integrated Road Safety Program’s speed reduction campaign and will be used only for the submission of story ideas. Selected individuals who have submitted stories will be contacted prior to using the information in awareness materials. Questions regarding the collection and use of this form should be directed to the Integrated Road Safety Program Coordinator, 100 Constellation, 613-580-2424, extension 28187.”

Be safe, be seen 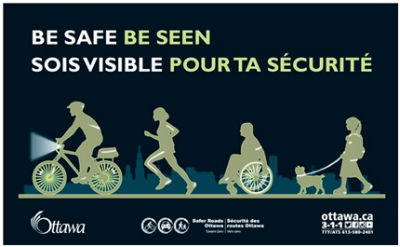 Slapping reflective material on your arm or wrist is an easy and practical way to make sure you are seen at night. Without reflective gear you are practically invisible to other road users. With a reflective band you can be seen up to 150 metres away!

Transcript for 'Be Safe Be Seen - English Version' video

Visit Safer Road Ottawa’s community toolkit page to find out what resources we can bring into your community.

Keep an Eye Out for Motorcycles

In May, where the weather becomes warmer, more residents decide to take out their motorcycles. The motorcycle community of Ottawa would like to remind all road users to be diligent of motorcycles on our City’s streets.

Below are videos from the 2013 campaign: 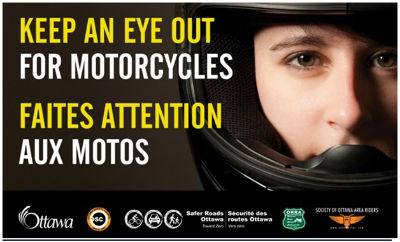 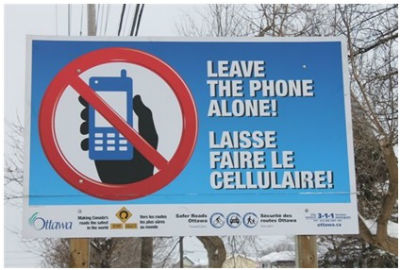 Ottawa has the most wildlife/vehicle collisions in Ontario.

Vast rural areas, combined with plenty of green space and wooded areas in urban centres, make Ottawa an ideal locale for the occurrence of vehicle/wildlife collisions. As well, the upsurge of the deer population in Ottawa and most of Ontario has compounded this situation.

In fact, 1,000 wildlife/vehicle collisions on Ottawa’s roadways are reported each year – more than any other area in Ontario.

The risk of wildlife crossing the path of vehicles exists throughout the year, but the risk is much greater in the fall – especially between dusk and dawn.

If wildlife crosses your path, stay in control

If you lose control, you can suffer a far greater consequence – such as a head-on collision with another vehicle.

Your best defence is slowing down. So, remember, Speeding Costs You… Deerly!

Thank you to our community partners for helping to make the Speeding Costs You Deerly campaign possible:

An extensive communications campaign was undertaken in the fall of 2006 to increase awareness among drivers about the high incidence of deer-vehicle collisions. Drivers were educated about the importance of reducing speed, being alert, staying in control and understanding deer traffic patterns as ways to reduce the number of collisions.

The Ottawa-Carleton Wildlife Centre presented the City of Ottawa with a special Environmental Award for its Speeding Costs You Deerly campaign. The Centre elected to give this award, only the second award given in its 22-year history, because the campaign’s objective of prevention and education is at the heart of the Centre’s mission in establishing a better understanding and appreciation for wildlife while mitigating the impact of development and human encroachment into wildlife habitat.

Slow down for us! 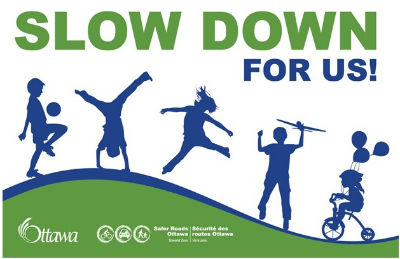 Is speeding a concern in your community? In 2013, SRO ran many “Slow Down for Us” campaigns. Invite us to your next community association meeting where we will present you the options that are right for your neighbourhood. Interventions range from “Slow Down For Us” lawn signs (picture below) to short term speeding enforcement by members of the Ottawa Police.