The Ottawa Heritage Awards (formerly the Ottawa Architectural Conservation Awards) were held on February 19, 2019 at the Alex Trebek Alumni Hall at the University of Ottawa. The presentations were made by Mayor Jim Watson for projects completed from 2016 to 2018. These biennial awards recognize outstanding contributions to the restoration and conservation of Ottawa’s heritage properties. 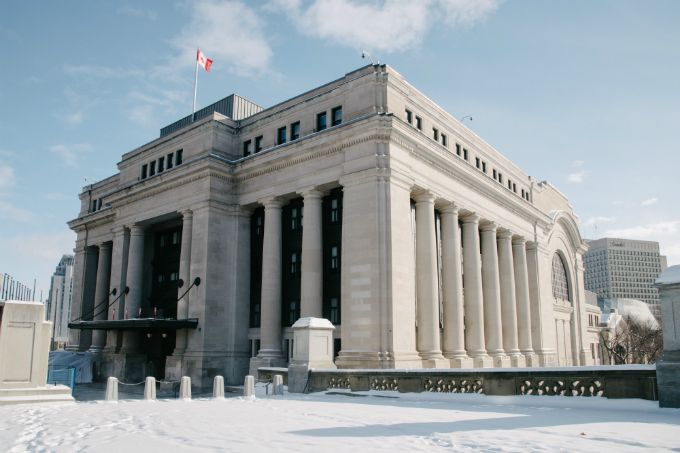 The Senate of Canada Building was built between 1909 and 1912 to the original design of B. Gilbert, as modified by Ross and MacFarlane. Designed in the Beaux- Arts Style, the building served as Ottawa’s Union Station until 1966. It later became the Government Conference Centre, until this restoration project began in 2014. The project consisted of transforming the building into the temporary home of the Senate of Canada. The work included restoring the plaster ceilings and walls, restoring the windows and masonry, and adding an addition to the eastern part of the building as well as on the roof. In addition to the restoration, the scope of the work included a new Senate Chamber, three committee rooms, offices, as well as accessibility upgrades.

This stunning transformation of the Senate of Canada Building returned key heritage features of the former Union Station building to their original Beaux-Arts splendour, while introducing contemporary and reversible updates appropriate to the building’s new use. Restoration of the original vaulted ceiling and multi-paned windows creates a dramatic counterpoint to the enclosed committee rooms and the Senate Chamber. The design of the newly completed east façade respects the historic structure while showing that with sensitive consideration, heritage buildings can be successfully updated with modern elements. Overall, this project is an outstanding example of adaptive reuse, using the highest standards to breathe new life into this iconic building. 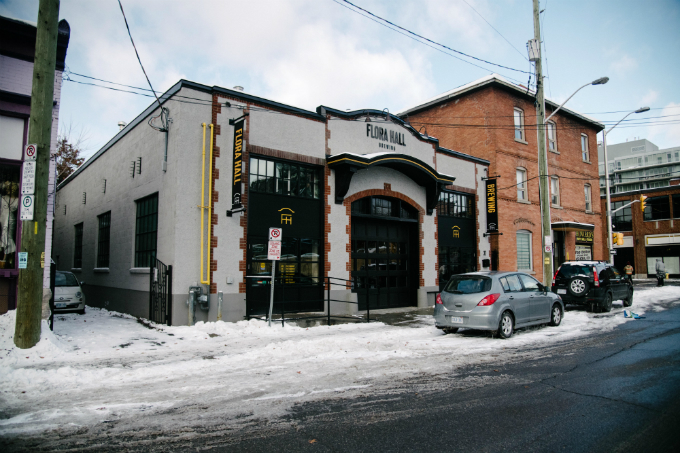 The building was constructed in the early 20th century and was used as garage for many years. The building is a two-storey flat-roofed structure with a curved wood canopy, and stucco and brick quoins around the windows and on the corners. The building fell vacant in the early 2000s, before the property was bought by the current owner to convert it into a brewery. The project consisted of maintaining as many of the original industrial features as possible. These includes the glass block windows, wooden plank floors, stucco cladding and brick accents.

The transformation of this derelict industrial heritage building to a vibrant gathering place is an excellent example of adaptive re-use. Retention of the building’s original massing and fenestration, combined with restoration of original architectural elements blends cohesively with new interior elements custom-fabricated with respect for the original structure’s industrial roots.

This project is a laudable example of private citizen engagement in preserving Ottawa’s built heritage and an innovative and important showcase for adaptive re-use, demonstrating that with vision, heritage buildings can be successfully restored and repurposed. 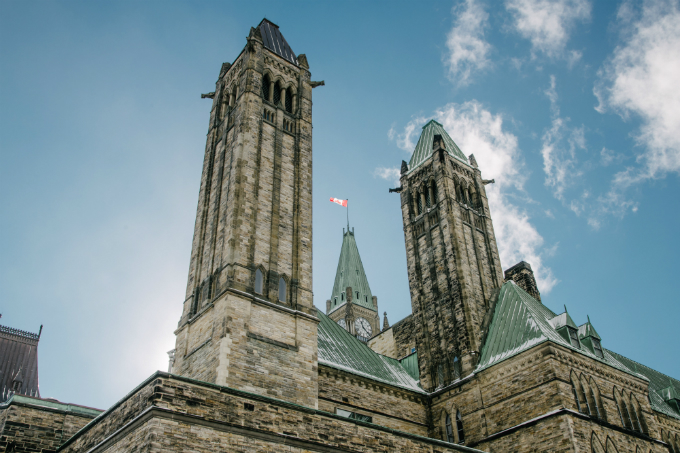 The ventilation towers are a functional part of the original 1916-1921 Centre Block Parliament Building. They are situated on the north side of the Centre Block and exhaust air from the both the Senate and House of Commons chambers. The towers had developed structural problems and had been temporarily braced for quite some time. The project consisted of the installation of structural steel channels that were mounted into the masonry to provide capacity to resist reinforcement. Additionally, a significant amount of brickwork had deteriorated and would need either repair or replacement. The conservation approach was consistent with other work on the Centre Block and with the Standards and Guidelines for the Conservation of Historic Places in Canada.

This well-considered restoration project involved considerable technical analysis in its successful determination of how best to resolve significant structural stability issues in a heritage sensitive manner. Engineering solutions and extensive masonry work were balanced by the retention of original materials and minimal intervention wherever possible. Traditional cleaning methods were carefully controlled to retain an appropriate degree of exterior patina, resulting in a nearly imperceptible restoration of these important architectural elements with heritage character intact. 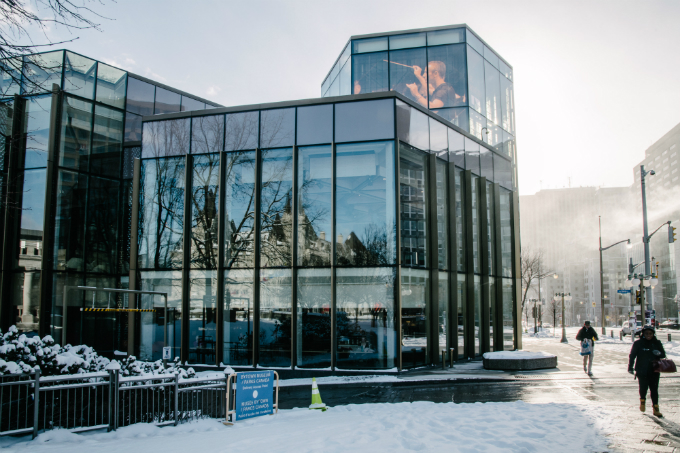 Built as a centennial project, the National Arts Centre is a Brutalist performing arts centre featuring geometric shapes, textured aggregate cladding and open terraces. This 2016 project features three new wings and a marquee tower. The contemporary glass additions wrap around the building and takes inspiration from the original structure in terms of geometric patterns and public spaces.

Award of Excellence: Other 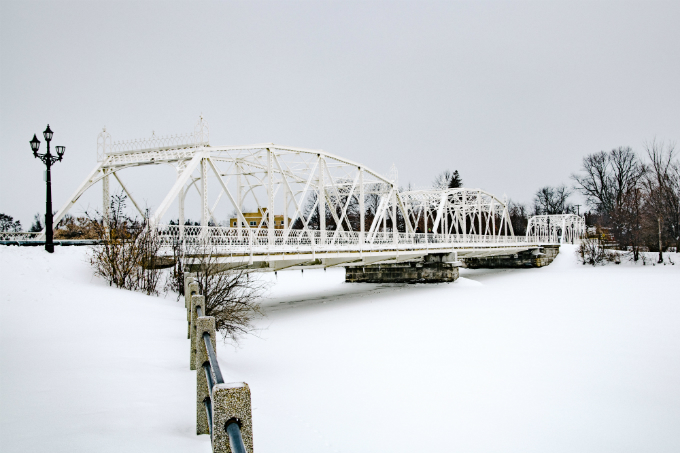 The Minto Bridges were constructed between 1900 and 1902 as a processional route from Rideau Hall to Parliament Hill. The bridges were built under the direction of Robert Surtees, Engineer and advisor to the Ottawa Improvement Commission as a four-span bridge of steel construction with decorative details. The rehabilitation project included structural work, the conservation of the masonry substructures, steel trusses, concrete parapet wall and decorative steel railings, as well as the in kind replacement of the wooden sidewalks.

The outstanding restoration of the Minto Bridges combined engineering and other technical considerations with sensitive attention to detail, preserving this beloved historic landmark with its heritage character intact. Careful restoration of these jewels on the Rideau River, involved both engineering considerations and a careful hand to bring these magnificent bridges back to their original splendour. 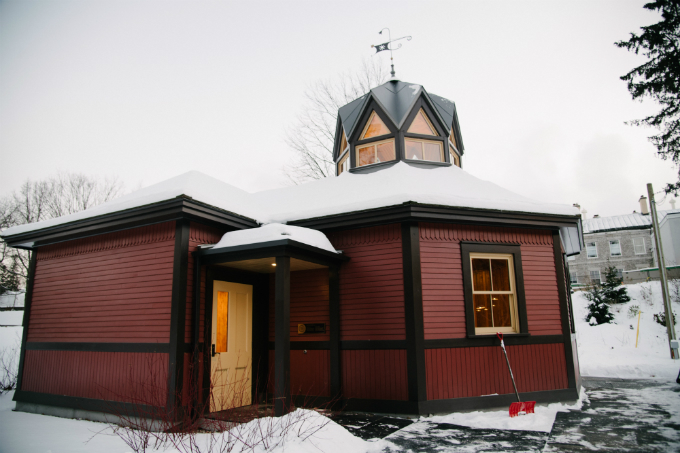 The Dairy Building was constructed in 1895 for dairy-related uses at Rideau Hall. Over the years, the building has been used as an artist studio and storage area. This octagonal wood-clad building is capped with a multi-faced lantern. The project consisted of a thorough analysis of the wood deterioration. The decayed wood was replaced, new windows were installed to replicate the original, and new steel was applied to the lantern’s roof to replicate the original, and the lower roof was reshingled in cedar shingles. An early colour scheme applied to other outbuilding across the site was adopted for this restoration project. Today, the building is used as a winter pavilion next to the skating rink.

This project is a successful repurposing of a significant building on the iconic Rideau Hall site. Preservation, restoration, and re-use of original materials, selective replication of elements based on historic evidence, and sensitive attention to detail, along with a return to historic colours based on original evidence, all demonstrate respect for the continued integrity of this building’s original 1895 design. A distinctive heritage structure lives on to serve a delightful new purpose while becoming accessible to the public, thanks to this well considered project. 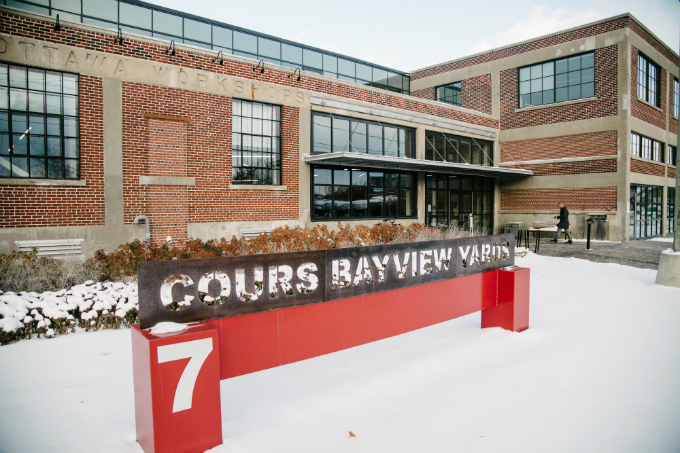 The Innovation Centre at Bayview Yards was constructed in 1941 as the City of Ottawa Workshops as part of an industrial complex centered on the railway tracks. The modernist building features reinforced concrete and a brick veneer and includes a flat roof and large windows. The project included rehabilitating the building for conversion into a technological hub while incorporating as many of the industrial elements as possible. This included retaining the exterior cladding, some of the steel windows as well as the wooden garage doors.

This is a highly successful repurposing of Ottawa’s industrial architectural heritage and an important showcase for adaptive reuse. The transformation of this 1940s “industrial modern” building to a technology hub for 21st century entrepreneurs celebrates Ottawa’s legacy of innovation. Preservation of the original structure and key heritage elements including the “City of Ottawa Workshop” name on the front façade, select multi-paned windows, and wooden service bay doors evidence the building’s industrial roots while integrating with contemporary elements of the rejuvenated interior. 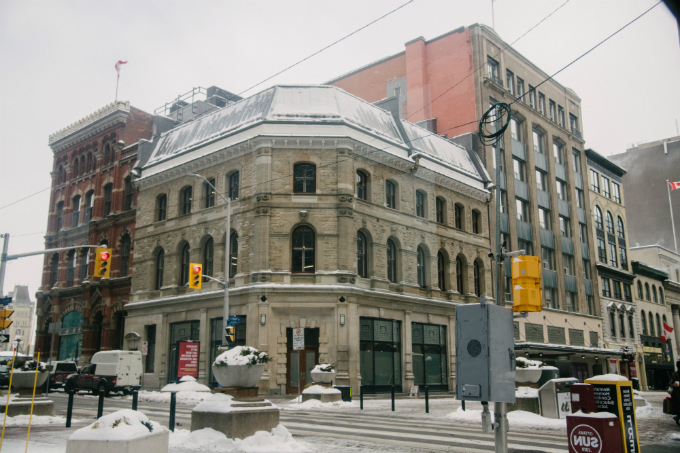 The building was completed in 1871 in the Second Empire style with sandstone cladding, a mansard roof, wooden cornice and decorative stone elements. By 1918, the rusticated ground floor stones were removed to accommodate large storefront windows. The building required major restoration work. This included restoring the masonry, windows and cornice. New replica doors were created, and the roof form was reinstated from an earlier version. A paint analysis was completed to reveal the original colour scheme for the wood and copper detailing.

This project involved the careful restoration of what was discovered to be a structurally unsound building. The efforts have revealed a jewel on Sparks Street, which had been invisible for years. Considerable challenges resulting from delayed maintenance were addressed in the restoration of this historic façade at the corner of Sparks and Metcalfe Streets. Preservation and restoration of original elements, combined with replacements in kind, preserves a valuable element of the streetscape’s history and heritage character, providing a tangible reminder of its historic origins as a commercial district. 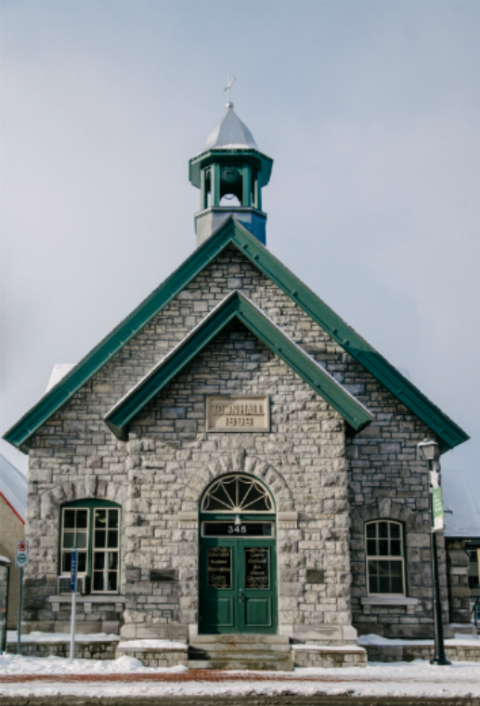 The Churchill Seniors Centre was constructed in 1896 as the Nepean Town Hall. The building features a gabled cedar roof, bell tower and projecting entranceway. The scope of the project included repointing the walls with a lime-based mortar, replacing hand carved stone window sills, and replacing cut stones.

The careful restoration and cleaning of the exterior stonework of this 1896 building, once the Town Hall for Nepean, preserves a local heritage structure which continues to make a valued contribution to the community. This restoration project showcases heritage masonry at its finest.

Award of Merit: Other 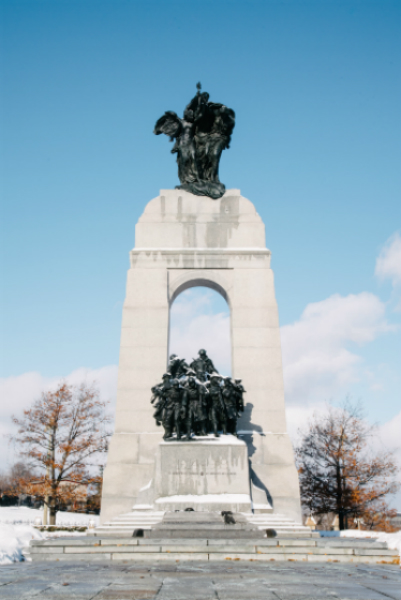 The National War Memorial is a cenotaph in the heart of downtown dedicated to the memory of all Canadians having served in the Armed Forces during a time of war. The memorial was unveiled in 1939 and has recently undergone restoration work. The scope of the project included restoration of the granite stones, cleaning and rehabilitating the bronze figures and structural reinforcement of the podium.

This project featured detailed heritage preservation and restoration work, performed in balance with structural and accessibility upgrades. These efforts have returned this highly significant monument to its original splendour while securing the future use of the site for all. 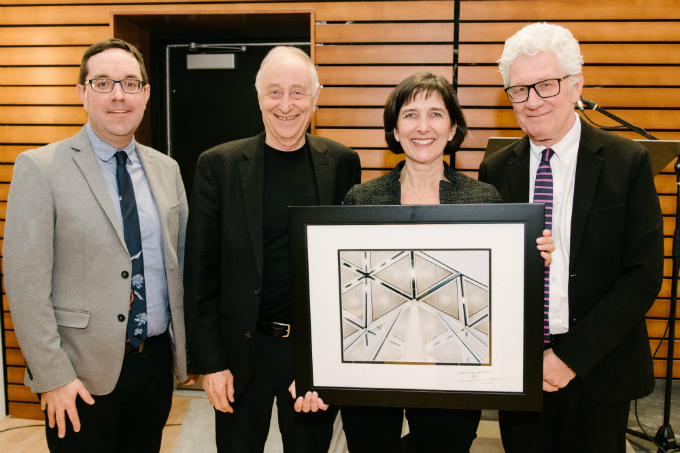