Read about the City’s plan to increase access to services and facilities for Ottawa’s diverse communities and citizens. 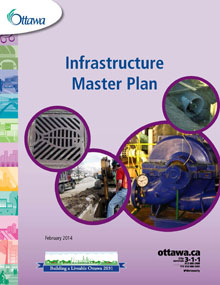 The purpose of the City of Ottawa's Infrastructure Master Plan (IMP) is to support the overall city-wide Official Plan (OP) goals of creating more vibrant, healthy and complete neighbourhoods across the municipality while ensuring long-term affordability for both the City government and residents.

Efficient management, responsible operation and judiciously targeted growth of water, wastewater, and stormwater infrastructure play a major role in the pursuit of these goals. The IMP supports the OP by ensuring there is enough infrastructure capacity in the right areas of the municipality at the right service levels at the right time to accommodate development and redevelopment until 2031 when the City of Ottawa population is expected to reach 1.14 million.

If you have questions regarding the Infrastructure Master Plan, please contact:

This amendment implements changes to various parts of the Official Plan as recommended by the comprehensive 5-year review, required by the Planning Act, and undertaken by the City in 2013.

Official Plan Amendment (OPA) #150 was approved by the Minister of Municipal Affairs and Housing on April 24, 2014. Notice of the Approval was given on April 30, 2014. Appeals to all and to parts the Amendment were received. In considering the appeals of the whole of the Amendment the Ontario Municipal Board determined that the City needed to complete additional reviews related to Employment Areas, the Agricultural Resource Area and the planning timeframe of the Official Plan. Further changes to address these issues were made through Official Plan Amendment #180.

OPA #150 is available in English PDF only at this time. When Amendment #150 comes into full force, it will be translated and formatted to be included with other Official Plan amendments.

On November 8, 2017, parts of Official Plan Amendment #150 came into effect and those changes have been consolidated into the online Official Plan.

The following maps, which remain under appeal, show changes to land uses for individual or groups of properties or replace and update maps in the official plan.

Official Plan Amendment 180 was adopted by By-law 2017-19 on January 25, 2017 and modified and approved by Ministry of Municipal Affairs and Housing on the August 8, 2017. Parts of OPA 180 came into force on November 9, 2017 and form part of the Official Plan. This amendment is appealed. However, parts of this amendment came into force on November 8, 2017 when some appeals were withdrawn or scoped to specific matters.

What does the draft amendment address?

The topics addressed in this amendment:

Growth Projections:  The adopted changes will extend the timeframe of the Official Plan from 2031 to 2036. This change results in new projections for future population, households and employment, text changes to the plan and an assessment of the supply of land to meet anticipated housing and employment demand.

Employment Lands: Proposed changes include the conversion of excess urban employment lands to non-employment designations, the re-designation of Enterprise Areas, a new Rural Employment Area designation and amended policies and land use permissions.

Agricultural Land: Proposed changes result from an update to the Land Evaluation and Area Review (LEAR) system and recommend changes to the Agricultural Resource Area designation in some areas, along with updates to the terminology of the Official Plan to reflect the changes in the 2014 Provincial Policy Statement.

Official Amendment #180 is available on this site in the legal form adopted by Council. This document is available in English PDF only at this time but will be translated and formatted to be included with other Official Plan amendments when it comes into full force.

Official Plan Amendment #180 [ PDF 285 KB  ] is the legal document adopted by the City through By-law 2017-19 and modifies the policies of the existing Official Plan and amends Official Amendment 150. In some cases, changes originally proposed by OPA 150 may be repealed. Policies and schedules, which come into force on November 8, 2017, have already been incorporated into the online version of the City’s Official Plan.

Direct your written submissions and/or questions to:

In 2011 Ottawa was home to 1,125 farm holdings, comprising 120,000 hectares of farmland dedicated to a mixture of cash crops, livestock operations and a growing number of local fresh food producers. These operations produced agricultural products with a value estimated at over $200 million.

In December 2016, the City of Ottawa adopted a new LEAR system to replace the system developed by the former Regional Municipality of Ottawa-Carleton in 1997. That system resulted in the identification of the agricultural areas designated as Agricultural Resource Areas as shown on Schedule A to the City’s Official Plan.

What is the LEAR system?

The primary component is the identification of land, comprised of soils, classed as 1, 2 and 3 in the Canada Land Inventory  (CLI).

These soils provide the greatest flexibility to support a variety of crops. A LEAR system also uses other factors in addition to soil class in order to identify the best areas of ongoing agriculture. The results of the assessment of each rural property using the LEAR criteria are mapped and the prime agricultural areas are identified as areas of 250 ha or greater that are predominantly CLI classes 1-3 soils.

This new LEAR system updates a number of factors to respond to new soils mapping and reflects changes in the size and nature of farms over the last 20 years. The Ontario Municipal Board directed the City to complete this update as part of the comprehensive review of the Official Plan.

The LEAR report has two volumes:

LEAR Volume 1 [PDF 3.61 MB] contains a description of the new LEAR system and how properties are scored.

Anyone can use the LEAR map to search for their property and see the new LEAR scoring or download the printable map [PDF 5.77 MB].

How is the LEAR system used?

The new LEAR was used as part of the review of the Official Plan and will inform the assessment of applications in the Agricultural Resource Area designation, such as new renewable energy projects or new agriculture-related uses.

Changes proposed to the Agricultural Resource Area designation following the update of the LEAR system have been incorporated into the Official Plan.

The Active Transportation Plan (formerly the Ottawa Cycling Plan) is currently being updated.

If you'd like more information please visit the project page.

The 2013 Ottawa Cycling Plan (OCP2013) is a long-term strategy to strengthen and support cycling in the city. It was developed as part of the Building a Liveable Ottawa process, which also led to updates of the City's Official Plan, Transportation Master Plan, Ottawa Pedestrian Plan and Infrastructure Master Plan.

The project and network maps that support the OCP2013 can be found in the on-line geoOttawa mapping tool, in the Layer List tool under Cycling and Cycling Plan. A complete description on how to use GeoOttawa can be found in Annex C of the cycling plan.

The Active Transportation Plan (formerly the Ottawa Pedestrian Plan) is currently being updated.

The Ottawa Transition Board oversaw the amalgamation of the Region of Ottawa-Carleton and 11 municipalities to create the new City of Ottawa on January 1, 2001. The work of the board is summarized in its final report [PDF – 5.2 MB]. If you wish to receive this report in another format or any other public documents created by the board, please contact Claire Lee at 613-580-2424, ext. 13180 (TTY: 613-580-2401).

The Transportation Master Plan is currently being updated. If you'd like more information please visit the project page.

The Transportation Master Plan (TMP) identifies the transportation facilities, services and policies that the City of Ottawa will implement to serve a projected population of 1.14 million people by 2031. It sets direction for the City's day-to-day transportation programs and provides a basis for budget planning that is consistent with the growth management policies of the City's Official Plan.

The City is currently updating the TMP based on the Scope of Work approved by Council in June 2019. For more information about the TMP Update, visit the project website for the Transportation Master Plan Update.

If you have questions regarding the Transportation Master Plan, please contact: