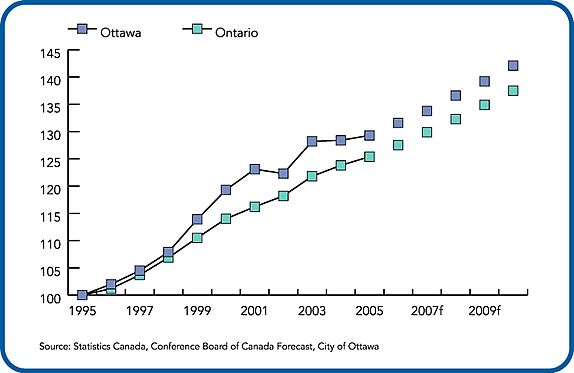 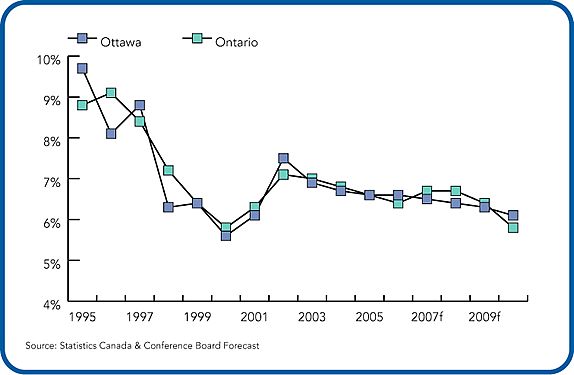 Ottawa boasts a population of 870,250, which represents an increase of 7.9% since 2001. This growth rate is faster than Ontario's rate (6.2%) and Canada's rate as a whole (4.8%). Ottawa accounts for approximately two-thirds of the population of the greater Ottawa-Gatineau area, which has a combined total population of 1,282,500.

The population is growing

The population growth is expected to continue. The City's 2003 Official Plan predicted growth of 37% over the next 15 years. Recent growth trends have been somewhat slower than originally predicted, and this estimate may be revised in 2007. Even with the revision, it is clear that actual growth rates remain above average. Immigration is a major reason Ottawa's population continues to grow faster than that of Ontario or Canada. 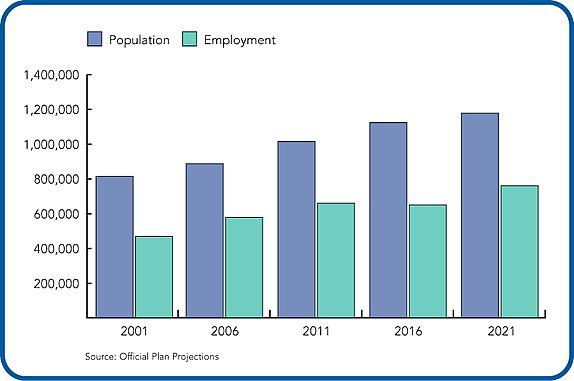 The population is aging

The proportion of children in Ottawa has been dropping since the 1960s. Children below the age of 19 made up 40% of the city's population in 1966. Today, that age group represents approximately 25% of the population. Their share will drop even more to approximately 20% of the total population in 2021. In fact, every age group below age 55 will see a decline in its share of the overall population by 2021.

While the proportion of young adults (aged 20-34) was as high as 29% in the mid-1980s, it is now approximately 22%. This age group will increase its share of Ottawa's population between 2001 and 2016, reflecting the passage into adulthood of baby-boomers' children (baby-boom echo). By 2021, young adults will account for less than 20% of city residents. 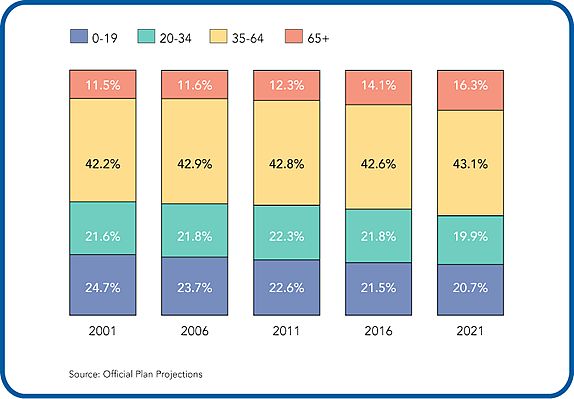 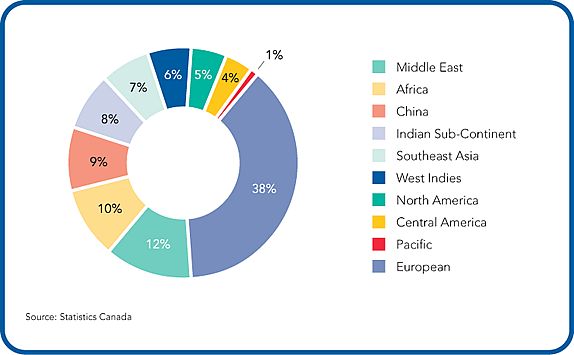 In 2005, the total building permit value for the Ottawa-Gatineau census metropolitan area (CMA) was $2.24 billion, a slight decrease of 1% compared with the previous year. This was mainly due to less industrial and institutional development in Gatineau, which translated to lower metropolitan growth averages. To date, 2006 building permit values for the Ottawa-Gatineau CMA are slightly ahead of last year.

The graph below shows the building permit values for the City of Ottawa from 1991 to 2005. 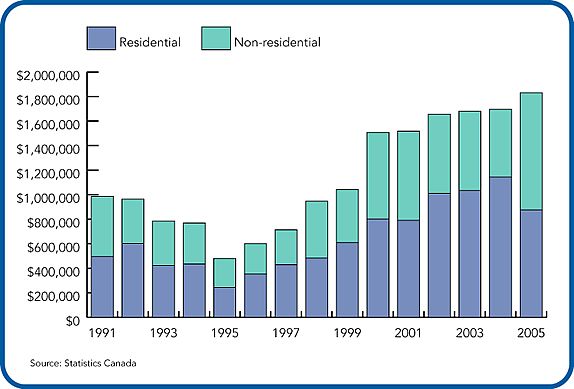 Non-residential construction in Ottawa was responsible for the surge in activity in 2005. In fact, institutional and government construction projects more than tripled, fuelled by projects such as the Canadian War Museum, the new wing of the Royal Ottawa Hospital, major expansions at hospitals and universities, and ongoing renovation at several government buildings. Industrial construction increased by 110% over 2004, while commercial construction dipped by 8.3% and residential activity declined by 23.3%.

Low interest rates, a traditionally tight rental market, strong employment gains and steady population growth have fuelled Ottawa's real estate market over the past several years. Housing starts in Ottawa reached a cyclical peak in 2004, slowed down in 2005, but are 6% ahead of last year's levels as of the end of June. 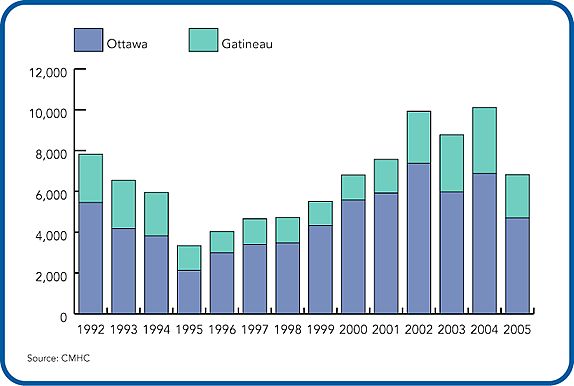 After four consecutive annual increases, Ottawa's rental vacancy rate decreased to 3.3% in 2005, from a cyclical high of 3.9% in 2004. The decline is attributed to rising home-ownership costs, low rental construction, lower rents in many of the survey zones and, to a lesser degree, strong levels of youth employment leading to quicker departures from parental homes.

Home ownership has become slightly more affordable since 2005. In 2005, including both new and resale units, there were 4,428 affordable homes on the market (27.5% of the overall supply of housing). This is a small improvement over 2004 when 26.8% of homes were affordable.

However, as the following graph demonstrates, ownership prices have gone up in recent years, both for resale housing and new homes. In 2005, 5,466 houses were built in the City of Ottawa. Of these, 13.4% were affordable to households earning up to $56,800 a year, the 40th income percentile. Generally, affordability improved slightly in 2005 mainly because many new town homes were built.

In the residential resale market, 34.7% of homes sold were priced below $208,000 and were affordable to households at the 40th income percentile. 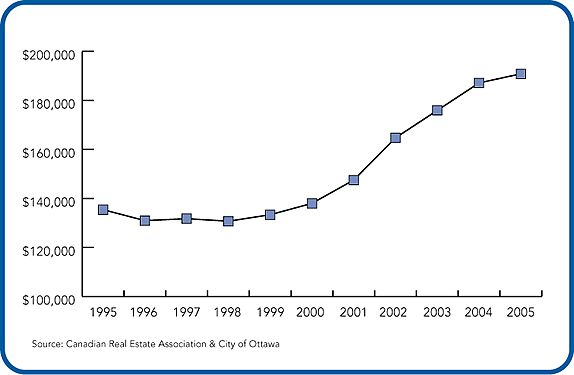 Relatively low mortgage interest rates have meant that many householders could afford to own their own homes. The slight surge in the condominium market in recent years has also created more affordable ownership options. However, in 2005, the principal and interest charged on Ottawa's average condominium exceeded two-bedroom apartment rents, suggesting that condominiums are becoming a less affordable option to Ottawa residents. The average rent for a two-bedroom unit was $920 in 2005.

Housing affordability for tenants remains a problem in the city, where 35% of renters spend more than 30% of their income on housing. The affordable monthly rent for households up to the 30th income percentile in 2005 was $1,108. Fortunately, the picture is improving. Overall, average rents decreased for all types of apartments, except bachelors, in 2005. That same year, the number of renter households with affordability problems decreased a modest 12% from 1996 when 50,000 households paid more than 30% of their income for shelter.

As the following graph demonstrates, Ottawa's market for office space in the central part of the city remained strong due to continued demand, primarily by the federal government. The suburban office rental market has declined since it peaked in 2000. The recent improvement in the technology sector has led to increasing demand for office space and a decline in suburban vacancy rates. By the end of 2005, overall vacancy rates declined 36% as more office space was used in the suburban market. 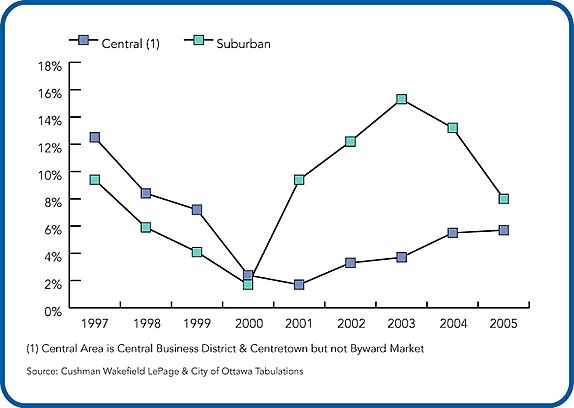 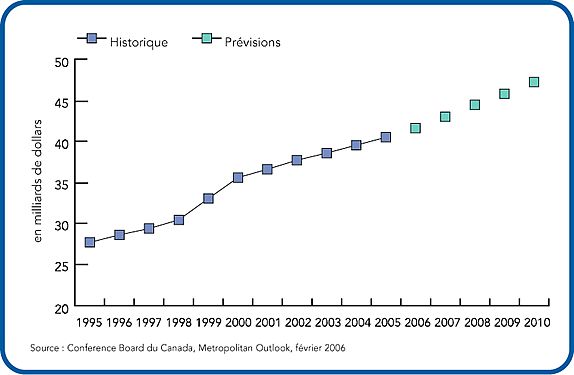 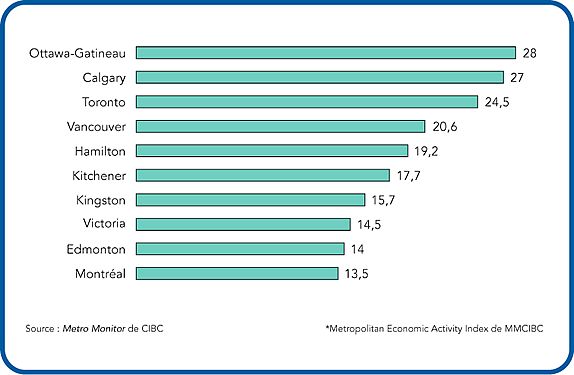 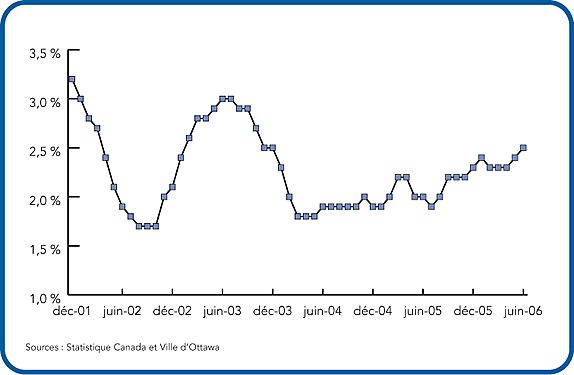